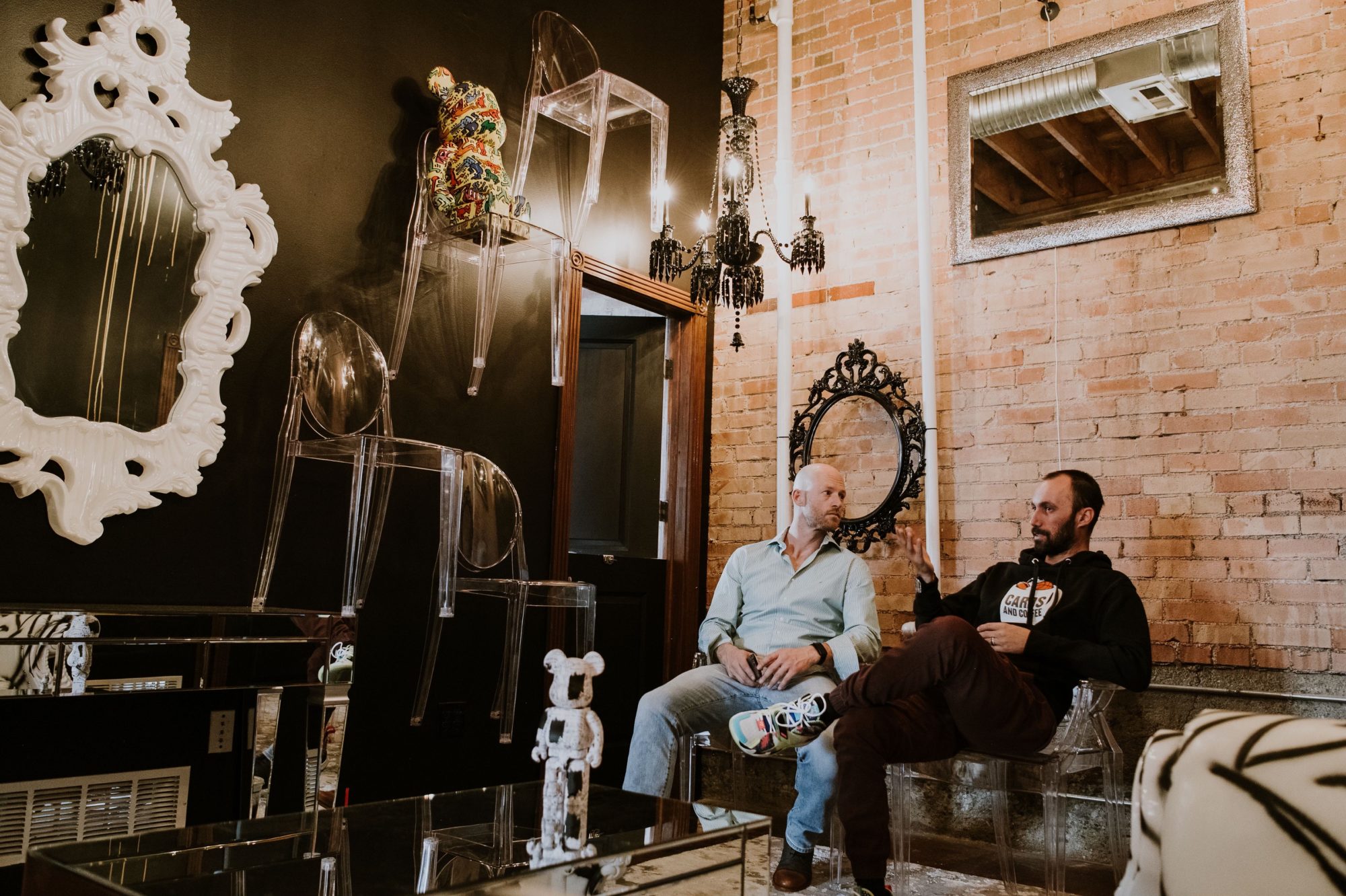 Three decades ago, Jared Bringhurst ran home after school to set up a card table at the end of the driveway at his Salt Lake City home. At 12 years old, he had a key target audience: classmates on their way home from school who would walk by and inevitably shell out money to buy his plethora of sports trading cards. “I made $800 a month as a sixth-grader,” says Bringhurst.

Various other entrepreneurial ventures filled the following years of his adulthood—ranging from a window replacement company to a financial services firm. Now at 41, Bringhurst has come full circle with his childhood hobby and business pursuits: he is selling trading cards to collectors as a co-owner of the new Cards & Coffee store that opened in downtown Salt Lake City this spring.

“This market is unlike anything I’ve ever seen,” says Rich Mueller, editor of Sports Collector Daily, which tracks the collectible industry news. Mueller says there was a surge in demand for trading cards in the late 1980s and early 1990s, but nothing like today.

Credit the Covid pandemic. Middle-aged collectors suddenly stuck at home began looking through old cards, perhaps sharing their childhood hobby with their own kids, and then they began finding gems. Add to that the recent death of basketball star Kobe Bryant and the release of the Last Dance documentary about Michael Jordan and the 1990s reign of the Chicago Bulls.

People started sending their cards to grading companies to get the cards inspected for authenticity and rank based on corners, edges, and more. Soon, the grading companies became overwhelmed and those factors created the perfect storm for an explosive market.

Card companies create packs at various price points, from $2 to hundreds of dollars, depending on the quality and content―like whether they include bits of a jersey swatch or a signature. Trading cards also go beyond baseball and basketball: they’re hot for collectors of soccer, the World Wrestling Entertainment, and NASCAR as well as niche games like Pokémon and Flesh & Blood.

The opportunity wasn’t lost on Bringhurst. His friend and fellow serial entrepreneur Dan Flyshman had recently opened a Cards & Coffee shop in Los Angeles and Bringhurst texted him in February proposing they open a store together in Salt Lake City. Born and raised in the city, Bringhurst knew it was a prime location for collectors—as well as home to a plethora of budding tech executives and new millionaires in the state.

Two months later, in April, Cards & Coffee opened its 2,500-square-foot store in downtown Salt Lake City with a couple of million dollars of inventory, and it has since drawn a steady flock of buyers.

Though a physical store, Cards & Coffee has won a worldwide audience with “breaking”―the popular trend of opening card boxes on social media platforms that draw online viewers and buyers. The store regularly opens a box of cards online that someone purchased—where the exact cards inside are a surprise to everyone—and streams it live to an audience on Facebook, Twitch, and Instagram. “It’s instant gratification,” Bringhurst says.

It can also be pretty lucrative, with cards in those boxes sometimes worth thousands of dollars. In one case, a Cards & Coffee customer bought a $1,900 box and now has a 1/1 Kobe Bryant signature black card on auction with the largest auction company, Goldin Auctions, hoping to get over $200,000 for the card.

Another popular trend in collecting: buying a “share” of a box of cards for $200 to $1200. In these cases, a number of buyers watch as Bringhurst opens the physical box to discover which cards they now own. “It’s like Cracker Jack prizes on steroids—but for adults,” says Bringhurst.

The allure of the prize has created surprising demand in the market. Pokémon is struggling with the availability of its cards. Resellers are buying up hot cards and then reselling them, driving up prices. Stores are struggling to get allocations of new cards from manufacturers. And demand for cards is so high that Target pulled trading cards off of its store shelves after customers at a Wisconsin store fought over them and one person pulled out a gun.

The fever has also attracted big investment dollars and the attention of star athletes, venture capitalists, and tech executives, and it’s spawned a new breed of trading card startups. Last fall, for instance, Courtney and Carter Reum, California brothers who’ve invested in startups like Lyft and SpaceX, launched a new L.A. investment firm called Mint 10 that focuses on “alternative assets,” including sports cards and startups that power the industry.

In December, NBA stars Kevin Durant and Matthew Dellavedova invested in StarStock, an online marketplace for buying and selling sports trading cards that mimics the feel of stock market trading. For each card sold, StarStock takes a five percent fee from sellers. In April, the company raised $8 million from investors.

Durant has also backed another new platform called Alt, which lets users invest in sports cards as you would any stock. Investors put $31 million into it, including Reddit co-founder Alexis Ohanian and Stripe co-founders Patrick and John Collision.

Several other new startups let users invest in collectibles, breaking down assets into shares. Investing platform Mythic Markets, for one, raised $2 million in funding in 2019, and the sports cards/memorabilia startup Collectable, for another, received a $5.5 million cash infusion last year.

Rally Rd.—backed by $27 million—lets investors buy and sell chunks of sports cards—as well as Lamborghinis and Birkin handbags. Another startup, Otis, calls itself the “Nasdaq of culture.” Backed by $14.5 million from investors, it sells shares of trading cards—as well as sneakers, comics, and art. In February, Goldin Auctions, a marketplace for collectibles and trading cards, received $40 million investments. Meanwhile, Card Ladder launched last year to provide trading card data and prices to the industry.

And in June, the Topps Company, which produced American football, baseball, basketball, ice hockey, soccer, and other sports-themed trading cards, announced it would go public by merging with a special purpose acquisition company, or SPAC, in a deal worth $1.3 billion.

The fever has also spread to a resurgence of bricks-and-mortar card stores, which had largely disappeared over the years with the rise of eBay deals. But a flurry of new card shops have been popping up across the country, including Venue Sports Cards in Spanish Fork and Finders Keepers in West Valley City.

“It’s almost a retro thing to open a store now,” says Mueller of Sports Collector Daily. He believes a market correction will be coming soon. “This can’t last forever.”

Bringhurst is far more bullish, betting that a hobby he loved when he was 12 will still find legs in the years to come. Plus, physical trading card stores may help solve a big problem in the card trading industry: trust. Last year, the FBI launched a fraud investigation into two major sellers of cards online suspected of doctoring cards.

Having a physical store with a friendly, local face adds a lot of credibility, says Bringhurst. “You’re real,” he says, “You’re not some guy in a basement on eBay who is going to rip you off.”

With the new store open in Salt Lake City and another shop in Los Angeles, Cards & Coffee intends to expand to Florida and more cities on the East Coast—and eventually populate the entire US.

Says Bringhurst: “We want to be the Starbucks of sports cards and fantasy cards.”