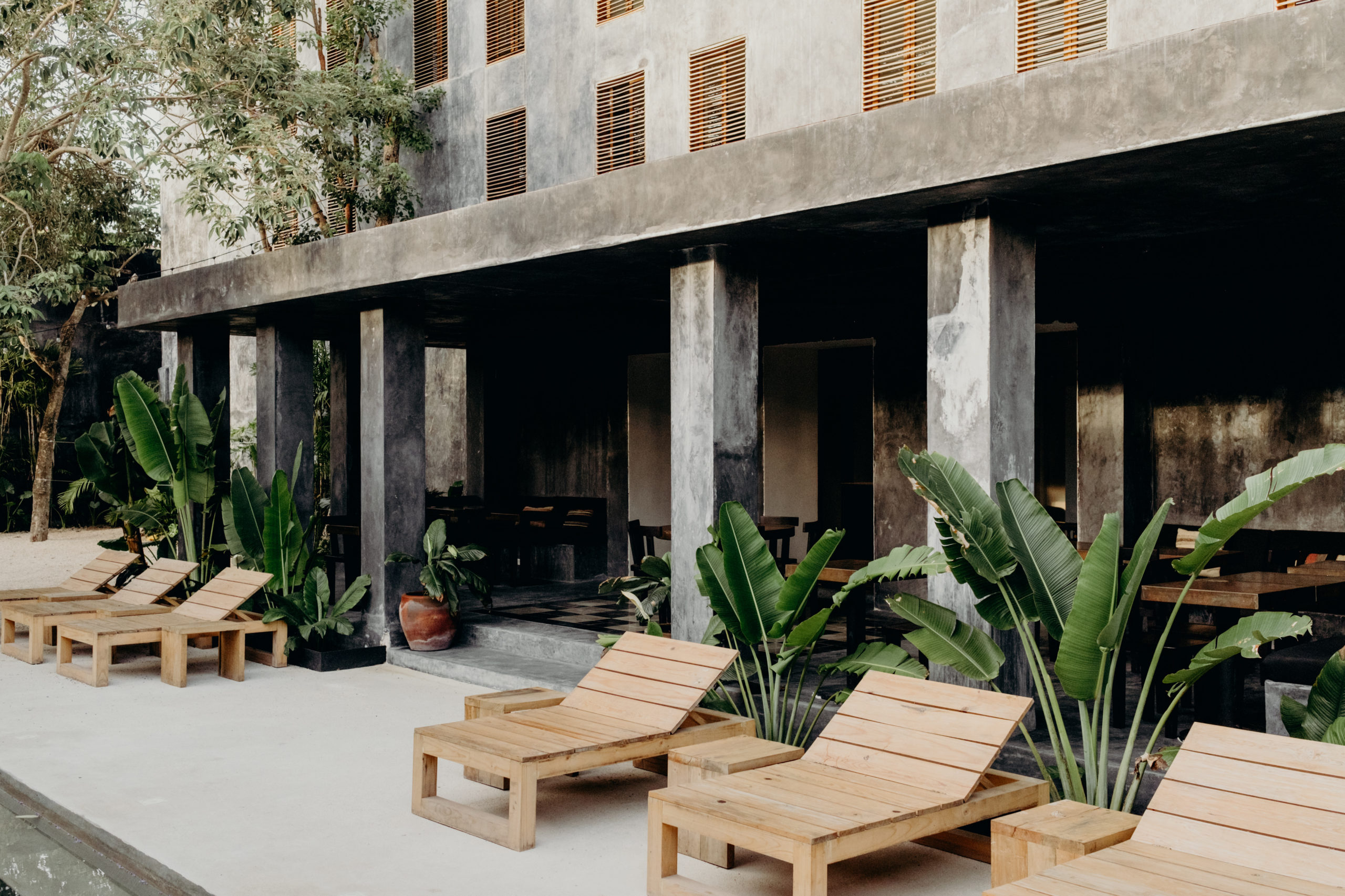 This Mexican hotel group is coming for Utah

Derek Klein was born and raised in Utah, but his career in design and hospitality has led him all over the world—from London to Marrakech, India, and for the last decade, Tulum—before he returned home in the fall of 2020.

Klein first carved his own path as a stronghold within Mexico’s hospitality scene as founder of the Tulum restaurant GITANO as well as the Casa Pueblo Hotel Group, and the hotelier and business owner is now a household name across the Yucatan Peninsula. “The best way to describe Mexico is magical,” he says. “I first visited Tulum almost two decades ago and fell in love with its rawness. Over time, a close-knit creative community emerged there, and I quickly had a vision for what this area could become.”

Klein was mesmerized by the opportunities he found in Mexico when he arrived in 2010. “My arrival in Tulum came after a 3,000-mile journey from LA in a mellow-yellow colored 1978 Mercedes; it was pure gypset! This was a unique moment where creatives like myself were just driving down, making their way into town, and setting up shop. We were all so hungry for collaboration in a supportive atmosphere; it was essentially a think-tank mentality. Together, we pioneered a vision for Tulum that put it on the map in a huge way, and I will forever be proud of being part of something that metamorphic.”

Building restaurants and hotels in Tulum

In 2013, Klein founded the Tulum restaurant and bar GITANO with the help of a building loan from his father―it quickly became the most trend-forward place to see and be seen. “In that period, Tulum was hot so starting a business there was an extraordinary experience,” Klein says. “It was this haven where influencers, celebrities, and fashion icons were coming to find respite within our free-spirited paradise.”

Taking on this ambitious project early in his career allowed Klein the time and space to learn the ins and outs of being successful within the industry. A few years after, he stepped out on his own and built Casa Pueblo, an elegantly designed boutique hotel that earned a consistent sell-out rate and a cult-following. For Klein, this was a proofpoint that his business model could work, and two years later he opened a sister location, Casa Pueblo Boca Paila along Tulum’s beachfront.

Like the original Casa Pueblo, Boca Paila embraced tropical minimalism with a 50s-era French Riviera twist, while offering a level of luxury that was unprecedented amongst Tulum’s more Bohemian and understated properties. “Someone told me it felt similar to how Soho House in Miami or Hotel Costes in Paris moved their cities’ hospitality center of gravity. It’s a distinctive alchemy and x-factor that I’ve always strived to instill in each project I touch, not only because I’m a scene-setting perfectionist but also due to the financial rewards that come along with creating a new scene and that’s what I plan to do with my next outposts as well.”

Casa Pueblo quickly became the destination for young creatives who were visiting Tulum for work, play, or a mixture of both. “I recognized that a place for both business and pleasure was needed, which is often the case in up-and-coming entrepreneurial, creative towns, and Casa Pueblo established itself as a true hub for not only vacationers but also entrepreneurs within the scene in Tulum to come together, hangout, enjoy a conversation, do a little work, and perhaps leave with a new connection or collaboration.”

Taking that business model to Utah

Klein credits the decade he spent building both hotels as the most transformational period of his entire life, and now he plans to bring what he learned in Mexico to the state of Utah. “More and more people are looking for unique destinations with alternative accommodation such as cabins, tents, chalets, etc.,” Klein says. “They are traveling to more rural areas looking for back to nature experiences. There is no better place to build an idea or concept around this type of experiential offering than our beautiful state of Utah.”

That’s why Klein sold his two Mexican properties and moved to Utah in 2020. “I felt like it was time for a departure from Mexico, and I’ve always known that I’d return home to Utah for a number of reasons. This place has a singularity that separates it from the rest of the world, and I don’t say that just as a native son. No matter my extensive travels, Utah has always kept calling me back with its raw beauty and its sheer vitality,” he says.

Though starting a business amidst a global pandemic can be risky, Klein has only found more confirmation that now is the right moment for a new venture. “Utah is an opportunity zone and more now than ever it is becoming a desired destination for those who are looking for back-to-nature experiences,” Klein says. “Utahns appreciate and love the outdoors but they also love and appreciate elevated experiences in both food and beverage offerings and experiential hotel offerings.”

Alongside his new, US-based business partner Dylan Elchami, the duo have started Elchami Klein, a development company that merges Klein’s hospitality resume with Elchami’s real estate experience. The two are combining what they learned from personal successes of the past decade with confidence that their expertise will prove key to launching these new projects in Utah’s market. The projects they have in the pipeline currently are set to “change Utah’s landscape for the better by adding to the beauty it already offers,” says Klein.

Elchami Klein has already purchased $6 million in property, with plans to spend another $35 million developing their first project in Southern Utah. The name and details of the project remain private for now, but the team anticipates reaching well over a $100 million in valuation by the time it’s complete. Also in the works is a $15 million parcel outside “one of Utah’s most prized national parks,” that’s currently being secured for a $200 million residential and mixed-use community.

Above all, Elchami and Klein aspire to create unique hospitality experiences that provide destinations within themselves, while also adding to the lives of fellow Utahns. “I plan to make full use of the state’s raft of impressive minds and invite locals to help weigh in on the project, offer preferential employment to qualified residents, and collaborate with the community to make something that we can all benefit from,” Klein says.

Creating that same sense of creative collaboration and community that he cultivated in Tulum’s jungle town is a top priority to Klein. While Utah’s creative hub is arguably not as well-known across the global sphere, Klein has quickly recognized that there are talented makers, artisans, and designers that he believes can push the projects further and add local flavor. His goal is to bring the community together while allowing people to experience Utah through the distinct lens that is the Casa Pueblo brand.

“Utah’s creative hub may not be well-known in the rest of the global sphere, but there are extraordinary makers, artisans, and designers here who have interesting points of view. The goal is to bring the community together and let people experience Utah through the distinct lens that is the Casa Pueblo brand, while also creating best-in-class programming and offerings,” he says.

“We’re currently building outside of Salt Lake City because we feel that people are migrating out of the city areas. This past year has proved that in a bigger way,” Klein says, “People instead want to escape to destinations. People are looking to invest their money in more remote and unique locations. Salt Lake City is a wonderful place and perhaps one day we will be inspired to conceptualize and open a property there, but as of now we are focused on more remote areas in Utah with a criteria that the property is near the national park lands.

Klein whole-heartedly believes that this is the moment for Utah’s hospitality renaissance. “People have been shut in for so long with the pandemic that they’re clamoring for formative experiences, for travel that enriches and energizes. Utah offers the perfect setting because it’s filled with opportunities to explore—there’s a natural energy here that is ancient and in some ways almost primal, and Utahn’s careful stewardship of the land makes the Beehive state an unsullied location for environmental communing,” he says.

And Klein is inspired by the young, vibrant workforce that is present across Utah. “The community is squarely focused on coming together to drive the local economy. Here I’ve quickly discovered the same kind of exchanging of ideas and unity I valued so much in the early days of Tulum.”

For Klein and Elchami, this is only the beginning of their long-term aspirations for a larger series of curated hotels, luxury residences, and real estate developments all across the state, which have already garnered interest from a wide array of investors. “We’re going to create a legacy of new, thoughtful design in an era where things are starting to feel too commercial and authentic experiences that will stay with our guests for years to come,” Klein says.

“Right now, we’re all putting a premium on exploration, of being able to leave the house and interact with people and places and make memories. I’ve returned home to Utah primarily because I believe it’s the perfect place to create a nexus to fulfill that need for wandering.”