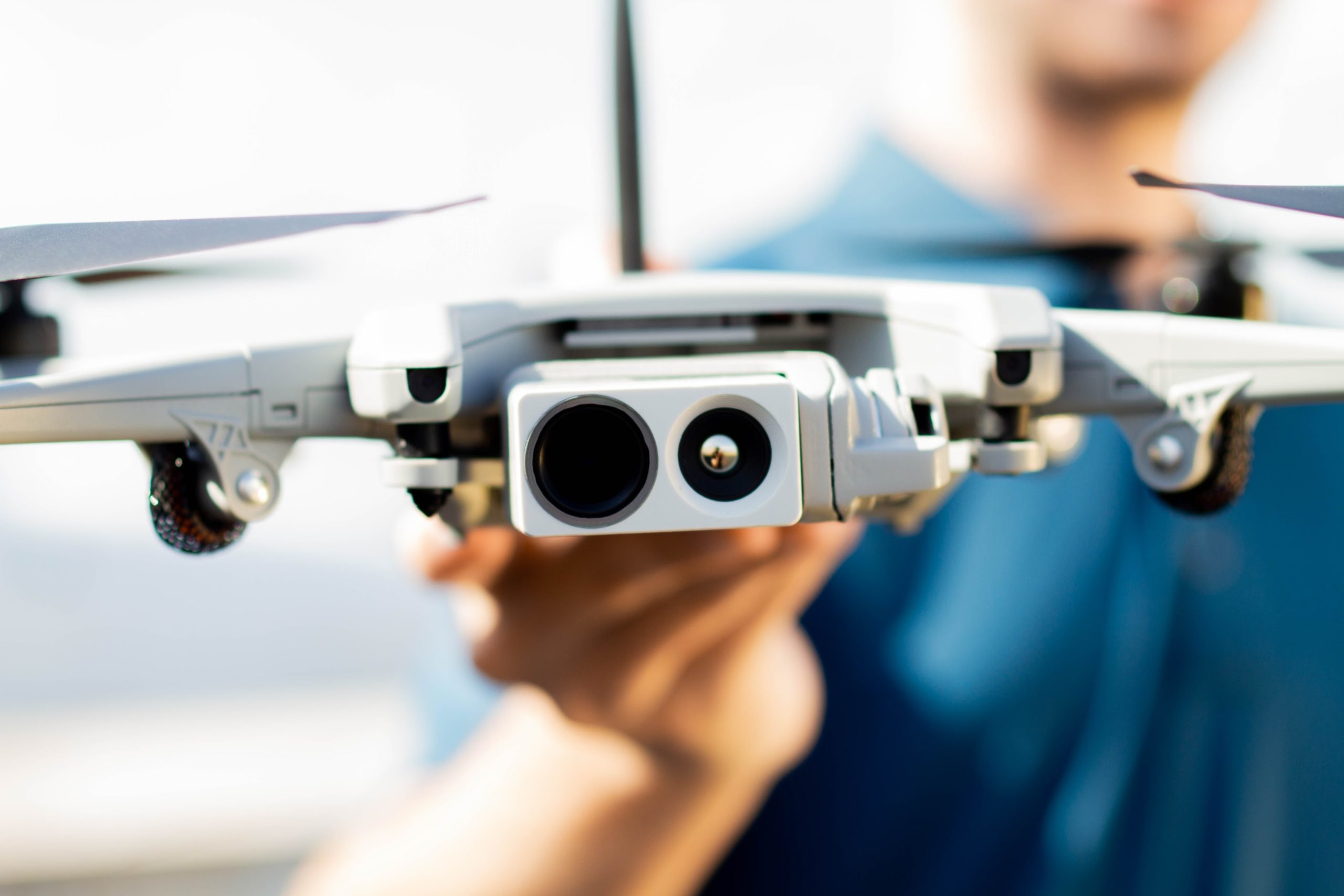 George Matus is no stranger to seeking funds for his latest drone adventure. At age 12, he took a job as a test pilot for a drone manufacturer so he “wouldn’t have to do a lemonade stand to buy my next drone.” These days his company Teal Drones is one of several in Utah that does research and product development for the US military.

Many Utah drone companies have used partnerships through various military programs to fund the basic R&D behind the products of their dreams. What began with access to some of Utah’s natural advantages, such as wide-open rangeland for product testing, has evolved into an ecosystem of researchers and companies building the next generation of drone technology. And while many of these cutting edge products are destined, first for the Air Force or the Marines, their producers have an eye toward eventual commercial applications as well.

“All of your drone technologies—everything you can buy at Walmart now in terms of flying something around and taking pictures,” says Randal Beard, the Stephen V. White professor of electrical and computer engineering at Brigham Young University, “[was originally] funded by the military.”

Utah was perhaps positioned from the beginning to become a leader in drone technology thanks to its access to long stretches of flat, straight, uninhabited highway, and political leaders who worked to champion the drone industry in Utah through the Governor’s Office of Economic Development back, as they say, before drones were cool.

Being located near Dugway Proving Ground, a military test site located in Tooele County, has also proved a boon to Utah businesses, because for some years Dugway was one of the few places where researchers could fly and test drones with potential military applications, according to Steve Fortson, general manager of Lockheed Martins’ UAV portfolio.

But Utah’s universities also played an important role in bringing the state to the forefront of drone technology, especially Brigham Young University. Before BYU established the multi-school Center for Unmanned Aircraft Systems in 2012, Professor Beard came to the university in 1996 straight out of a PhD in electrical engineering, during which he had primarily studied manufacturing robotics. It was while searching for new research and funding opportunities that he came across a call for proposals from the US Air Force, which was seeking solutions related to path planning problems for unmanned aircraft.

“The question was if we had a rapidly changing environment and we wanted to figure out how to maneuver in this environment to avoid obstacles and threats, how would you do that in a very fast way with limited computation,” Beard recalls. With his experience in robotics, which requires solutions for problems such as the automated assembly of a car, Beard already had experience with path planning. “This was just a path planning problem in a new context, with unmanned aircraft vehicles, and it had interesting constraints different than other problems I had worked on.”

BYU got the gig and, shortly thereafter, scored a second job working with the Air Force Office of Scientific Research regarding coordination between multiple unmanned aircraft. In the early 2000s, he says, there was little interest in these topics, and BYU happened to be in the right place at the right time to position itself as a leader before the field began to take off.

As time went on, advances in computing capacity, GPS, and sensor technologies began to make low-cost drone hardware more widely available and interest in drones ballooned. Researchers at BYU continued to focus on path planning, and by 2004 they spun off the drone autopilot technology they had developed into a company called Procerus Technologies, which was later acquired by Lockheed Martin. The Procerus operation remains in Utah, as do the majority of the engineers who worked on the project while studying at BYU, providing a continual stream of talent for a growing number of local drone companies.

Lockheed Martin continues to enjoy strong support from BYU and other area universities, who supply the company with capable graduates experienced in aeronautics, mechanical and electrical engineering, and autonomous vehicles, according to Fortson.

“We have been adding staff,” he says. “We’re hiring local to the greatest degree that we can, and we’re finding great talent out there.”

The groundwork laid by BYU and early commercial spinoffs like Procerus created an ideal ecosystem for fostering young entrepreneurs like Matus. But when he started Teal Drones as a junior in high school, the industry was about to undergo a shift that would once again bring the military to the forefront of drone research.

When he began Teal, Matus recalls, his goal was to find new applications for drones, beyond then-common uses. “I had the idea to make drones be more than just a flying camera,” he says. “I’d noticed that all the drones on the market just took pictures and video, and I wanted to start a company that did more than that.”

Matus had his eye on ideas such as virtual reality or nighttime light shows. But a year into the company, he hit a snag when drones achieved what he terms “peak hype cycle.”

“Tons of companies were raising money,” Matus says. But Chinese drone manufacturer DJI was on its way to industry dominance and had begun buying or squashing the competition. “Around that time drones reached their trough of disillusionment and a lot of companies went out of business,” Matus says. “Drones didn’t have the impact people thought they would.”

In 2017, companies like Teal Drones got a second chance when the US military, concerned about the market dominance DJI had achieved, banned the use of their drones in military applications. To create domestic alternatives, the military once again put out a call for research and offered substantial funds to companies willing to develop new drone products. By early 2019, Teal Drones had won a $4 million contract to pivot to military technology and develop a drone that could meet specifications with relation to security, range, durability, and portability. The necessary research and development, Matus says, enabled Teal to develop in-house technologies capable of supporting their long-term ambitions.

“It actually fit very nicely into our roadmap,” Matus says. “We realize that we can’t fundamentally change the way drones are used overnight, so there are milestones we needed to reach. This was a step in the right direction.”

Other Utah companies have taken a similar approach, using military funds to finance needed research and development for future commercial products. Within a month of moving founding Fortem, chief technology officer and co-founder Adam Robertson said they had applied to a small business grant available through the Air Force, and by 2017 they had a $1.5 million contract. Since then, Fortem has won several additional contracts with other government entities.

“In the commercial world, usually you have to develop it on your own time and then sell it,” he says. “Here they say, this is what we want, and pay you to develop it for them.”

Fortem, like Teal, did have to pivot somewhat to fit the Air Force’s needs. The first contract they received, he says, sought an aircraft that could counter small unmanned aircraft. Fortem was working initially on technologies needed for drone delivery, and one of the capabilities they needed to develop in their drones was the ability to see and avoid other aircraft.

“In this case, I said rather than see and avoid, I want to see and attack other aircraft,” Robertson said. “It was a fairly natural transition. Our view was this was a way to get paid to develop technology we would then commercialize.”

Fortem eventually came to focus on drone defense, taking the technologies it created for the military and selling them to other customers who also required similar solutions—from drone-fighting drones to radar systems that prevent drones from entering an air space. This isn’t the exclusive domain of the government—stadiums, for example, may purchase their technology to prevent would-be freeloaders from watching an event via drone.

Drones manufacturers have to be careful who they sell to

Of course, one must be careful when selling military-grade drones. “We are technically international arms dealers,” Robertson says. “Say a company wants XYZ technology—we fill out some regulatory forms, and the government vets that to make sure it’s not going to a terrorist or known enemy of the US.”

But the government doesn’t necessarily object to the commercialization of products originally funded by the military. In fact, some of their contracts have required Fortem to develop a commercialization plan to ensure the product’s viability after the military funding expires, Robertson says.

This pattern of businesses using military funds to develop new technologies or products is far from uncommon, Beard says.

“The whole self-driving car industry was originally funded by the military,” he says. “They were doing a lot of different things trying to drive convoys down the roads so that when there was an IED and it would get it, hit would kill a robot rather than people.”

Many of his former students now work in the autonomous vehicle industry, Beard says, as commercial opportunities for self-driving—and self-flying—cars materialize.

But Robertson doubts the partnership between Utah drone companies and the US military will end entirely with commercialization. Fortem continues to work on military contracts, and defense is Lockheed Martin’s primary area of work. Teal has continued its quest to make drones with more than cameras and is pursuing weaponized drones with an eye toward the US military’s needs. Even BYU continues to work with the military, focused these days on GPS denied navigation—that is, training drones to fly by sight.

“I think, not only will Utah continue doing this, but we’re going to be doing more and more of it,” Robertson says. “This is a very fast-growing sector of the economy right now, with a very promising future.”