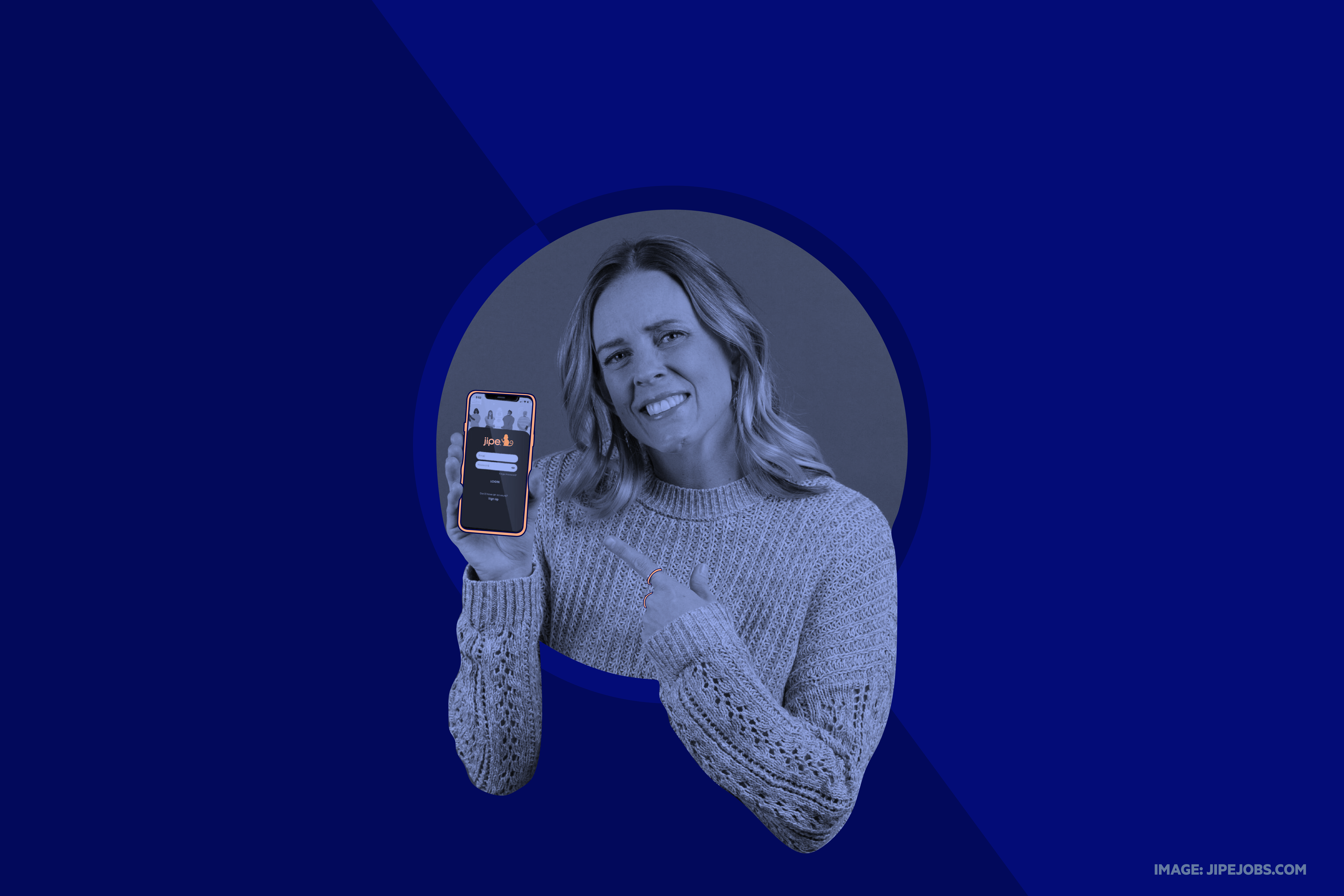 Are gamified hiring apps the key to getting Gen Z employed?

When Brenda Anderson’s son turned 15, she watched him face a dilemma. He wanted to get an entry-level job, but it wasn’t easy. With no work experience, his applications didn’t immediately engender job offers. And without landing a first job, he wouldn’t be able to get any work experience—the ultimate Catch-22.

Rather than complain, Anderson decided to do something about it. She launched Jipe, a job search app designed exclusively to match teens and young adults with entry-level jobs. The platform works a lot like dating apps: users simply swipe to apply for jobs, a process the app makes quick and easy for both the applicants and the employers.

Jipe is among a growing number of job-matching apps seeking to modernize the job-finding process. It’s part of the rapidly growing online recruitment industry, which has a global market size expected to reach $43.4 billion by 2027 (a 7.1 percent growth from $28.7 billion in 2020), according to a Fortune Business Insights report.

While big players like Indeed and LinkedIn are dominating much of the market, newcomers like Jipe are carving a just-right niche to meet the needs of an underserved group of job seekers.

“This was a personal pain point,” says Anderson, Jipe founder and CEO. “We were feeling the pain in our household of how difficult it was at 15 to get a job. There was no good solution for that age group. I felt like the opportunity was there. Nobody else was paying attention to entry-level.”

She explains that most businesses in the online recruiting space are competing for professional jobs while young workers have been left to fend for themselves. “We need to help these kids get going, help them identify what might be interesting to them, to make a connection in a meaningful way,” Anderson says.

Anderson asked herself what would work well for Gen Z—and the answer was to create a solution that makes sense for this generation: an app that functions just like the dating apps they’re familiar with. She also knew it would be important to instill a sense of confidence in the process, making it easier for youth with little to no experience to connect with employers willing to hire them. “We have a ‘no work history’ button they can click. Everyone starts somewhere, so no work history? No problem,” Anderson says.

In fact, part of Jipe’s value proposition is that users don’t need a resume to get started. “When you’re just getting going, resumes are a barrier,” Anderson explains. “We don’t require a resume to use Jipe. We help build work profiles with all our users, like a mini resume that’s stored in the app and submitted with every application.”

Another value proposition is Jipe’s speed. When users first download the app, account creation takes two minutes or less. Users can start swiping immediately and before they even submit an application. Once they’re interested in a job, they’re prompted to create their work profile. The app helps users write a bio, identify top skills, and be ready to start applying in about five minutes.

It’s a one-time process, which is in stark contrast to the countless online applications youth encounter when applying for several different jobs directly with employers. As users add work experience, they can edit their Jipe profile at any time.

“Our speed is what sets us apart,” Anderson says. “We’re so much faster than our competitors. We reduced the [application] time by 180 times on average. Most job applications take 40 minutes to fill out. Our users can apply for a job in just 10 seconds.”

In a post-pandemic world, recruiting isn’t easy. In 2021, drug store giant CVS dropped its high-school diploma requirement for entry-level positions in an effort to recruit employees. And at a time when it seems like every fast food restaurant, grocery store, and retail shop has a “We’re Hiring” sign in the window, Jipe helps employers find truly interested applicants.

Jipe works primarily with entry-level employers that have multiple listings, including chains, franchises with multiple locations, and stores that offer jobs in food, hospitality, retail, service, and tech.

According to Anderson, another of the app’s advantages is its affordability. While it’s not uncommon for Jipe’s competitors to charge $200 a month per listing, Jipe is $49 a month per listing. “We’re about as low as you can get without being free,” Anderson says. “We’re not charging a ton, and when companies find the right person, it more than pays for itself.”

With an emphasis on simplicity, Jipe has streamlined the process for employers, as well. “We’ve removed the red tape, taken out all the steps that aren’t necessary,” Anderson says. “We don’t want to make things hard if we don’t have to. We focus on collecting just the right amount of information.”

The onboarding is self-service, allowing employers to walk through the seven-step process on their own. They choose their plan, create a business profile, add their logo, include links to their social media and website, and provide background on why employees would want to work there. At that point, they can start uploading their first job listing. It takes about 20 to 30 minutes for initial account creation, and from that point on, companies can add new listings in two minutes or less.

“People used to reserve a chunk of time, maybe on a Saturday, to search for a job and apply, whereas now, with Fortuna, they can just open their phones and swipe whenever they have a few minutes to spare.”

Jipe launched in 2021 and is currently exclusive to Utah employers. “My goal is to eventually be a competitor with the big players, but in my own lane with this entry-level audience,” Anderson says. “We’re working to build a community of job seekers that entry-level employers can’t find anywhere else. We’ve built a platform that appeals to Gen Z, where our competition hasn’t.”

Other employment apps are looking to enter underserved spaces, as well. Fortuna, for example, focuses primarily on helping young workers in high-turnover industries like construction and hospitality. Co-founders Max Kilberg and Faris Qubain got the idea for the company during their time as economics majors during the lockdown of the pandemic.

The Fortuna website explains that small businesses employ half of the US labor market, and 70 percent of these businesses currently hire entirely offline. “As a consequence, job seekers are often completely unaware of relevant employment opportunities within their communities. Similarly, small businesses struggle to quickly and effectively source and hire the best local candidates. Once we identified this problem, we started Fortuna to create the solution,” the site reads.

Their Miami, Fla.-based company launched the app last fall. In an interview with Refresh Miami, the founders noted that in their first few weeks alone, they saw more than 10,000 pre-signups. They also touched on the unique challenges of applicants looking for blue-collar jobs. “People used to reserve a chunk of time, maybe on a Saturday, to search for a job and apply, whereas now, with Fortuna, they can just open their phones and swipe whenever they have a few minutes to spare,” Kilberg says. “The whole goal is to integrate this portion of the job search into a person’s daily life.”

With its focus on local, small businesses, Fortuna aims to meet these employers’ unique needs. Like Jipe, Fortuna touts its convenience and speed, citing a record of 1.2 hours as the shortest window for hiring a job candidate on the app. Fortuna also streamlines the application review process, offering an optimized selection of applicants within the clients’ specified timeframe. And it makes interviews easier, with the option for 90-second video interview submissions.

Based on an app store search, other startups are joining the job-matching app space, including companies like Switch, HireSwipe, and GoodJob. Most are touting “less stress” for applicants and employers. At a time when society is concerned about Gen Z’s much-talked-about tendency toward social anxiety, perhaps job search apps are a bridge to employment.

A Guardian article recently noted, “Many young people increasingly choose to stay within a comfort zone of a small network of like-minded friends in which much of their social activity is virtual, according to mental health experts. While this can give them more control over some aspects of their lives, it can also lead to social anxiety when they have to interact with people offline, the experts added.”

It wasn’t that long ago that applying for entry-level jobs did require some face-to-face interaction, with first-time job seekers having to physically walk into a fast food restaurant and ask for an application. But these new apps can circumvent that initial barrier to entry, removing their fear of instigating the initial connection.

With all those otherwise uncomfortable first engagements moved to the psychological safety of an online swipe, perhaps these niche job search apps will pave the way for more young adults to get out of the house and into those entry-level jobs, where they can start to build the foundation for a lifetime of work to come.

It’s that foundation that most inspires Anderson. She says that Jipe’s vision for the future is to support users as they gain work experience. “We want to help them level up, to give them resources so they can show up better, and teach them how to save once they start earning money,” she says. “I want to enable our youth.”