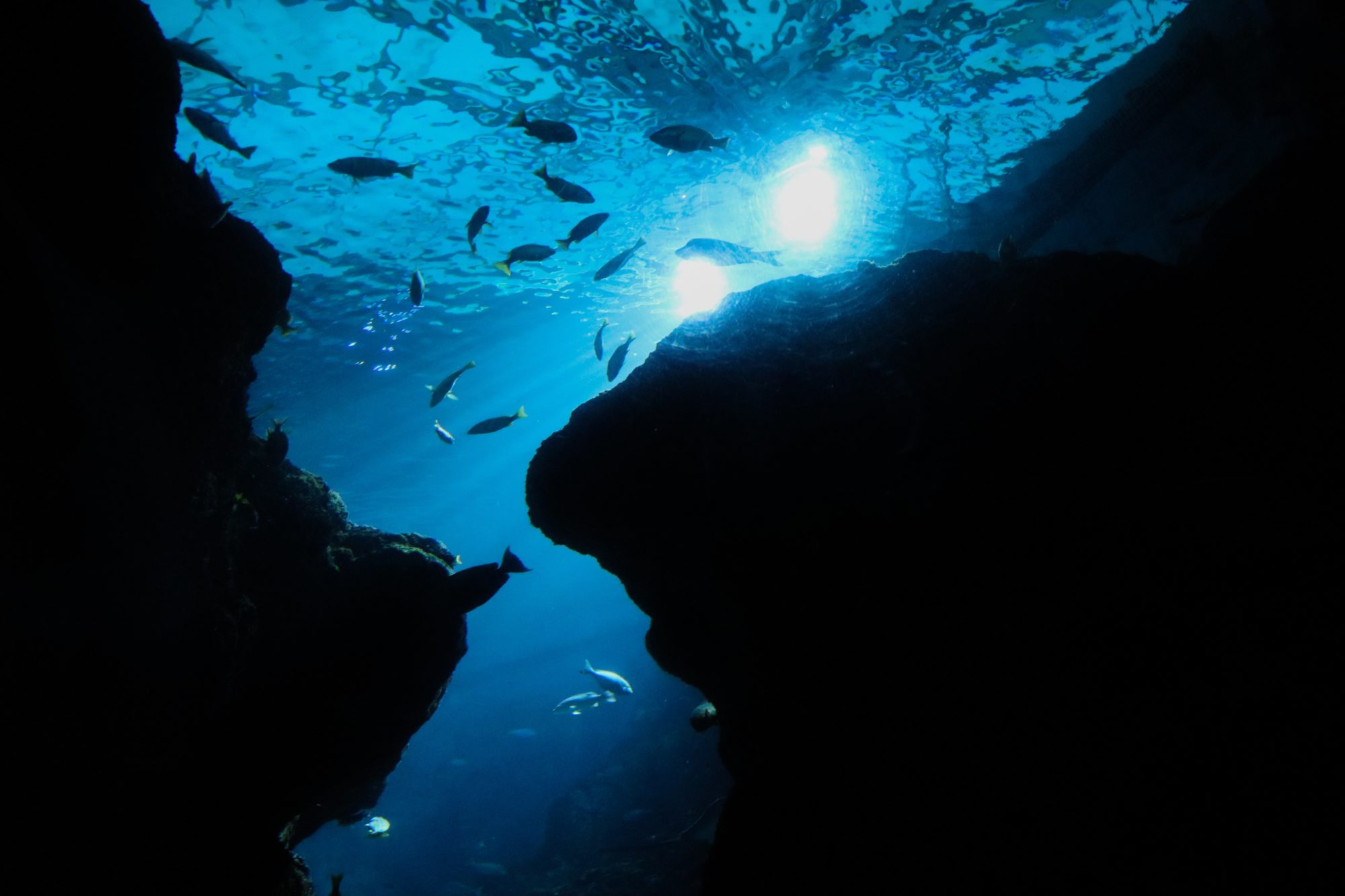 The problem, as Melody Brenna sees it, is obvious: We trash our waters.

The founder of IntelliReefs, a sustainable marine-based solutions company based in Salt Lake City, does not mince her words when it comes to the planet and her beliefs around the unfortunate way many, if not most Americans, have turned a blind eye to this urgent environmental issue.

But Brenna and a small but mighty team of people are endeavoring to turn things around through something called Oceanite, a unique reef restoration system that uses site and species-specific marine mineral substrates to enhance the growth and resilience of at-risk species.

The innovative conservation efforts have the potential to combat overharvesting as well as climate change and helps with issues caused by pollution. Essentially, IntelliReefs’ marine solution is in a unique position to keep the ocean’s crucial life-giving services—oxygen and food—afloat.

Brenna was living in Texas when she was approached by coral reef experts who she says basically came to her and said: “If we don’t figure out ocean infrastructure and come up with a substrate, a testable substrate that can be deployed all over the world, we’re going to lose the reef.”

Her Texas-founded company, Milestone Architectural Ornamentation, with the integral assistance of Dr. Konstantin Sobolev, IntelliReefs’ CTO and co-founder, created an industry-first laboratory for the casting of reef restoration technology and nanomaterials. Over 20 years of research went into the creation of Oceanite.

The high-performance mineral mixtures can be cast into a myriad of designs and scaled up too, allowing for the creation of new habitats along coastlines. Since Oceanite is specifically tailored to the individual site, the species residing in the particular region, and the function of the species, its potential impact is significant.

The work of Milestone Architectural Ornamentation laid the foundation for IntelliReefs, which officially formed in 2017, about seven years after Brenna relocated to Utah from Texas. It wouldn’t be long before IntelliReefs would be ready to activate Oceanite and use it as a viable element to be cast and placed in the waters of the Caribbean where it would be used to improve the quality and diversity of oceanic applications. Brenna calls it “really forward-thinking science.”

“Have you seen ‘Chasing Coral’?” Brenna asks, referring to the 2017 Netflix documentary that followed a team of divers, photographers, and scientists on a riveting adventure to document the disappearance of the world’s coral reefs. Dr. Ruth Gates, a lead scientist in the film, analyzed IntelliReefs’ info back in 2017 or so, explains Brenna, and her direct and profound reaction was one that would help set off a chain of events to drive the coral restoration reef movement forward: “This will save reefs.”

From lab to ocean

Of course, it’s one thing to develop materials in a lab and analyze how they might behave in real-life circumstances, and quite another to take the bold steps toward seeing how they literally function in real-life scenarios—in oceans.

Thanks to a crackerjack team of scientists, biologists, and divers—plus support from the United Nations—IntelliReefs now has proof of concept.

Brenna, who cites some challenges to running a business in Utah, is nonetheless generally grateful for the overall support IntelliReefs has received and is quick to praise her team, many of whom do not live in Utah. Emily Higgins, IntelliReefs’ director of ocean science, is one of her “brilliant” colleagues. Higgins, who lives in Toronto, Canada, joined the team in 2019 after Brenna reached out to her to consult on how to optimize IntelliReefs’ methods around addressing the limitations of current coral restoration efforts, along with customer pain points.

Higgins describes her role as ensuring “the material science supports the biological science from the nanoscale to the regional scale to make real and desired changes.” She works closely with IntelliReefs’ team members to make sure the engineering and design of the installation meet client biological goals and conservation objectives. Says Higgins, “I am also responsible for making sure that our team works with local academics and governments as effectively as possible to systematically monitor the ongoing success of our structures and wherever possible, innovate and iterate our solutions forward to anticipate future needs.”

At this time, there are 10 full-time members on the IntelliReefs’ staff, and a slew of contract workers and consultants, including a material scientist, a marine biologist, an ocean architect, a business expert, grant writer, storytellers, a graphic designer, and a marketing specialist. The diverse team is mostly remote, with staff in Hawaii and Virginia, Canada, and throughout the EU.

And there are other Utah entities involved as well: Brigham Young University Savage Consulting; and a financial analyst Marcus Van Gils, also from Brigham Young; World Trade Center Utah, which Brenna says has been pivotal in providing travel grants for Reef Life, which, in turn, has enabled them to travel extensively (Brenna reports being on a plane every month pre-COVID-19). What Intellireefs lacks in physical presence on the ground in Utah itself it more than makes up for in progress made around the world.

Attempting to save the coral reefs

Ian Kellet is another supporter high on Brenna’s list of instrumental people devoted to reef restoration. A close IntelliReefs’ ally, though not a part of the IntelliReefs’ staff, Kellet has helped make the IntelliReefs’ vision “a reality.” Kellet, who Brenna describes as “this wild diver who just got back from 72 days on the most advanced marine science boat on the planet for a company called Ocean X… a rock star company” was on the first IntelliReefs’ deployment as well as the second. As such says Brenna, “He knows everything about it.”

Kellet’s also adorable and fun, according to Brenna, though he’s unsurprisingly a bit more restrained in describing himself and his role. The California-based expedition leader (along with a slew of other titles) is an ocean explorer photographer who has been committed to ocean solutions for 10 years with a particular focus on creating “media that influences positive behavior around the healthy and diverse oceans.”

His interest and expertise in storytelling and media (Kellet teaches a media class at the University of California, Santa Barbara) led him to be a sort of field producer for IntelliReefs Oceanite pilot. Like both Brenna and Higgins, he expresses genuine concern over the state of our waters. “Our food, our atmosphere, the diversity of the oceans are dependent on these [coral reefs] systems, and in particular, this coral substrate of diversity.”

“We stand to lose a lot,” says Kellet, who adds that most people just don’t care because they’re not divers, they’re not snorkelers, and they’re not really connecting the dots.

Part of his work, as a storyteller with the desire “to create and deepen an emotional connection between your audience and the natural world,” involves a more balanced relationship between humans and the oceans. This is true even in land-locked Utah due to the link between forest fires and air quality, explains Kellet.

However, it’s in the Caribbean, a region dependent on tourism dollars and a hub of related activities such as scuba diving and snorkeling, where people are really feeling the oppression says Kellet. He adds that this, along with the very real destruction of coral, makes it a great place to begin the work of reef restoration.

“Basically all of the island nations who frankly are mostly closer to the equator, they’re in the direst position and the most in need of this tack, so that’s where we are going to start,” Kellet explains.

Thanks to an enormously successful pilot, IntelliReefs’ future—and that of Brenna’s children and grandchildren—is bright. We can’t let the coral reefs die; “if we let the whole system fail, we are so [expletive],” says Brenna.

The Sint Maarten Oceanite pilot showed that “we have the good science, we have proof of concept,” says Kellet. The three reefs in the Caribbean, which have demonstrated the ability of Oceanite substrates to enhance biodiversity, create additional habitat on degraded reefs, as well as attract and support new coral growth, and foster a healthy reef community is just the beginning.

Paving the way to future reef restoration projects, Brenna says they’ve been approved by the Netherlands for a five-year research permit in the Caribbean. There’s also a documentary in the works, continued UN involvement, and conferences.

Kellet is encouraged: “We’re heavily engaged in some deep conversations with some big organizations and the investment opportunity, I think, is massive.”