Many professional sports teams in Utah have arrived and departed with the speed of a flash flood in past years. These teams lacked financial stability, struggled to produce a quality product and failed to cultivate fan support.

Newer additions to Utah’s pro sports scene, like the Real Monarchs and the Salt Lake City Stars, are following a much different blueprint. These teams are operating under the umbrella of existing major pro franchises in the Beehive State and this relationship is making it possible to commit time, money and resources to build winning teams and cultivate fan support.

It has opened another avenue to showcase the success of sports in Utah. 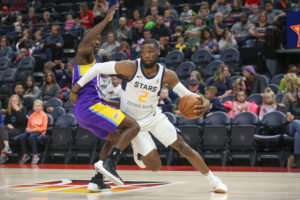 Making minor league pro basketball work along the Wasatch Front isn’t the easiest thing to do. Several previous teams that tried to do it either ceased operations or relocated outside of Utah.

For the Salt Lake City Stars, a much different story is being written. This team came to Utah in 2016 and is armed with staying power those previous teams did not possess. The Stars are owned by the Utah Jazz and are the official NBA G-League affiliate for the local NBA franchise.

What it means is that the Stars have a shared infrastructure with the Jazz. This creates greater flexibility and fluidity for player development. It also allows the basketball staff from the Stars to work closely with the front office, coaching staff and training staff from the Jazz.

“We’re not going anywhere,” says Jonathan Rinehart, Salt Lake City Stars team president. “We’re here to stay in the market. We are the Jazz’s minor league team and, certainly, look to establish ourselves here in Utah.”

Being a part of the NBA G-League offers many advantages. The Stars give fans a chance to see rising stars in action before they break out in the NBA. By the end of the 2016-17 season, nearly half of all players on an NBA roster had playing experience with a G-League team. This includes notable stars like Miami Heat center Hassan Whiteside and Jazz center Rudy Gobert.

With 26 G-League teams, the NBA has worked to further entrench the league as a critical step in the developmental process for younger players. NBA team rosters expanded to 17 players in the 2017-18 season and included two-way contracts for the first time. Players who sign two-way contracts can spend up to 45 days with an NBA team in the regular season and are a part of the G League team’s roster.

It allows teams like the Stars to bring in players that are on the cusp of making it in the NBA and help them develop their games. These players can then become future assets for a team like the Jazz.

“It’s 60 more guys that typically go overseas that are now staying home and playing for NBA teams,” says Bart Taylor, vice president of basketball operations for the Stars and director of scouting for the Utah Jazz. “Then there are other guys that maybe didn’t take a two-way (contract) but saw another opportunity. It helped bring a lot of talent home, which is great. It’s great for all of us. It’s great for the league. It’s great for the NBA teams. We get to scout these guys closer. We don’t have to fly over to Europe to watch them play, so it’s very helpful.” 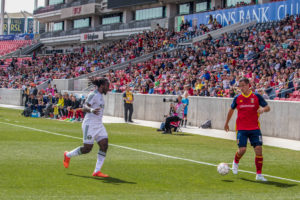 With a price tag of $78 million, this soccer training complex is situated on 132 acres in Herriman and features 10 outdoor and indoor soccer fields. Seven fields are regulation-sized (80 yards wide by 120 yards long). Two fields are housed inside the Zions Bank Training Center, a 208,000-square-foot indoor structure that is the largest pre-engineered free-span building in North America. Every soccer player associated with Real—from the newest academy addition to a veteran first-team player—will train inside this building.

A third playing field is housed within the 5,000-seat Zions Bank Stadium. This stadium will host matches for all of RSL’s youth academy teams as well as the Salt Lake Community College men’s and women’s soccer teams.

Most importantly, for the Real Monarchs, Zions Bank Stadium will be the USL club’s home stadium. Before the 2018 season, the Monarchs shared Rio Tinto Stadium with parent club RSL. Now these players and coaches have a place of their own to call home.

“I really think quite a few of them probably enjoyed playing in Rio Tinto (Stadium),” says Craig Waibel, RSL general manager. “But from a culture standpoint, from a psychological standpoint, it’s important that Rio Tinto remains the end goal of every player. The Monarchs having their own facility and their own environment to create is enormous because that’s a massive step for a professional athlete.”

The Monarchs have already taken massive steps on the playing field entering their fourth season of competition in the United Soccer League. They finished as regular season USL champions in 2017 after posting a 19-5-6 overall record and reached the USL playoffs for the first time.

Their success fits within the developmental vision RSL has for its USL affiliate. They want to build a winning culture within every level of the organization.

“They’re a pro team in every sense of the word,” says RSL owner Dell Loy Hansen. “They need that last inch to get them into the (MLS) game. We say if you’re going to play in the USL, the Monarchs is the very best place to play in the world. You’re going to get more attention here because it’s a competitive winning team.”

Getting the word out isn’t always easy for newer pro teams in Utah. It requires some creative marketing to put people in the seats. Those efforts do prove helpful.

The Stars put together a series of theme nights for home games played on the Taylorsville campus of Salt Lake Community College during the 2017-18 season. From Star Wars Night to Pirate Night, fans got to enjoy themed activities within the game experience.

Once there, they encountered an atmosphere much different than what’s commonly experienced with larger pro sports teams. Fans are closer to the players. They can get autographs and can quickly become invested in the team and its success.

“We’re trying to build that awareness and let people know who we are and what a fun experience it is coming to our games,” Rinehart says. “We’re extremely family friendly. We’re very affordable. We offer an accessibility too, because we’re in a smaller gym and we have postgame autograph sessions every night and our players are just very approachable and accessible.”

Single tickets for Salt Lake City games range from $5 to $25. It’s similar for the Real Monarchs. The average Monarchs ticket is in the $10 range.

Attendance for both franchises has been strong compared to their minor league peers. The Monarchs have averaged over 2,000 fans per match in each of its first three seasons. The Stars rank in the middle among G-League franchises in average attendance.

Salt Lake City has worked with community leaders through Chamber West and other organizations to get the word out and boost attendance. The Stars have seen a substantial increase from their first season to their second season.

Support from the business community has increased as well. When Hansen became part-owner, RSL had $2.9 million in corporate sponsorships. It crossed the $20 million threshold in 2017. Multiple new sponsors are joining up with the Real Monarchs and Utah Royals FC in the fold. One of these sponsors, Logan-based Conservice, signed a three-year jersey deal with Utah Royals FC in February.

This level of support from the Utah business community is a differentiating factor that gives these newer pro teams the resources to go out and compete at the highest levels in their respective leagues.

Success from local sports teams has opened the door for other pro franchises to come into Utah. Two new pro teams will make their debut in 2018.

Utah Royals FC will be the first National Women’s Soccer League franchise in the Beehive State. It is owned by Hansen and will operate under the RSL organization. The Royals will play home matches in Rio Tinto Stadium from April to September. 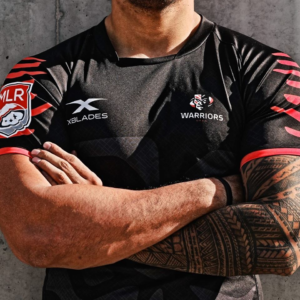 Major League Rugby will also come to Utah in 2018 when the Utah Warriors make their debut as a founding member of the league. The Warriors will play all of their home matches in Herriman at Zions Bank Stadium in a season that runs from April to July.

Weekly NWSL matches are aired on the Lifetime Network each Saturday afternoon during the regular season and the postseason. With several U.S. and Canadian national team members now on the roster, the Royals are expected to be a fixture on Lifetime broadcasts during the upcoming NWSL season and beyond.

“All of the sudden, we’re on a network where we’ll be one of the two most watched teams in the NWSL,” Hansen says. “Utah and Portland are the ones people are going to fixate on. It won’t be hard to see 300,000 to 1 million viewers (for each game).”

Weekly MLR matches will air on Saturday evenings on CBS Sports Network during the regular season and postseason. Getting a national TV deal before playing a single match offers evidence that the MLR has staying power as a pro league, which bodes well for the Warriors and their future in Utah.

It is unprecedented, in many ways, for an upstart professional sports league to get a media deal like this one right out of the gate.

“I can’t tell you how huge that is,” says Kimball Kjar, CEO and general manager for the Utah Warriors. “When were able to nail that deal, that’s when people not only within the rugby community, but outside the rugby community, began to really sit up and pay attention to what was being talked about.”

The Warriors are hoping to capitalize on Utah’s status as one of the nation’s rugby hotbeds to build up a strong fanbase in a short time. Teams from Utah have won national championships at the high school and college level and local rugby matches routinely draw thousands of fans.

“You’re playing into a fanbase that’s educated,” Kjar says. “They know the sport. They know what to expect.”