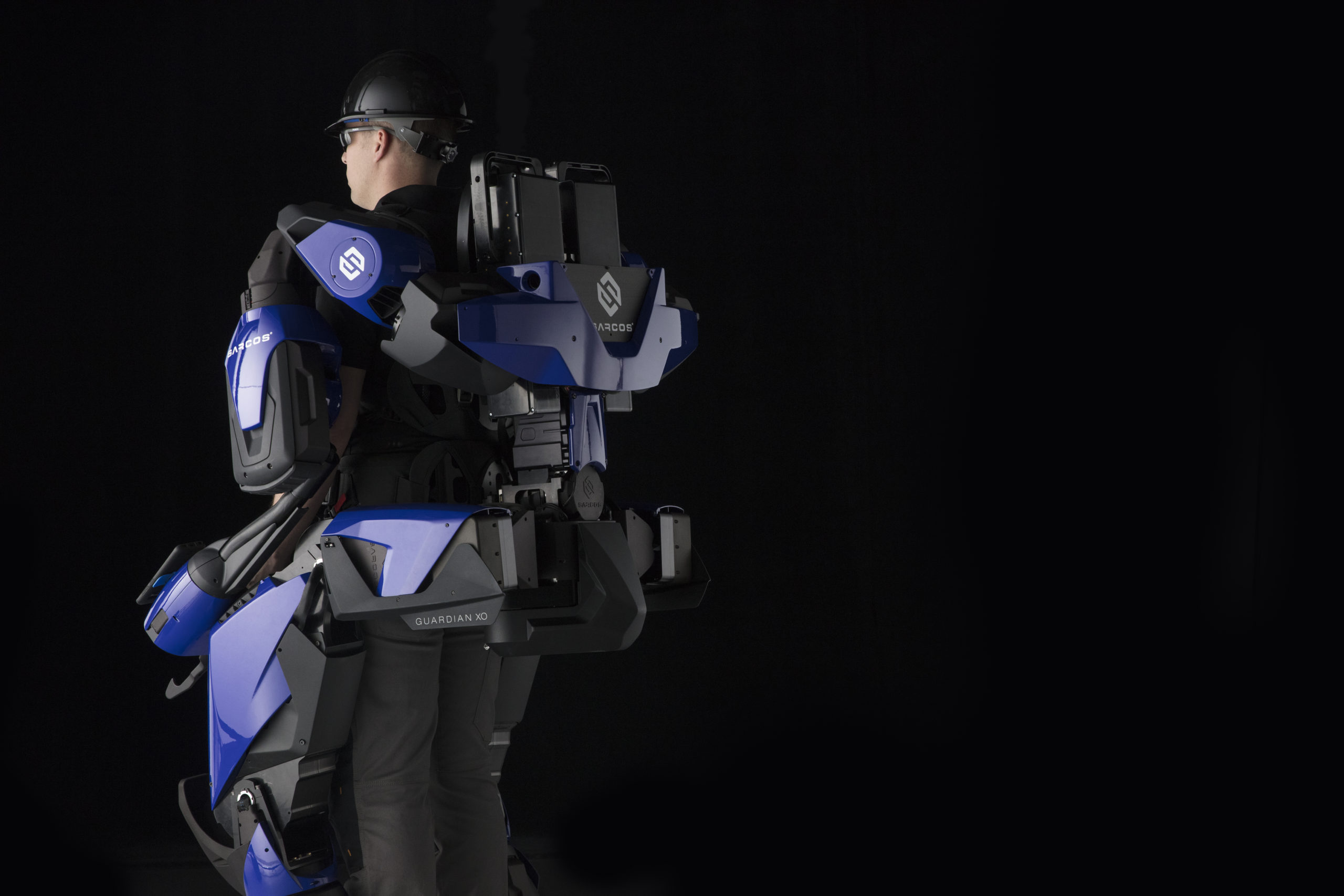 Sarcos Robotics is making Iron Man suits for the government

Imagine a futuristic robotic suit—something out of an Iron Man movie—that uses technology and years of research to combine the intelligence, instinct, and judgment of humans with the strength, endurance, and precision of machines.

“Sarcos’ vision centers around designing, building, and commercializing exoskeleton robots to augment the work of humans in a way that will boost worker productivity and prevent workplace injuries,” explains Ben Wolff, the company’s chairman, CEO, and president.

Twenty years in the making, Sarcos Robotics is a Salt Lake City outpost that’s currently leading the exoskeleton market on a global scale. Exoskeletons are wearable devices that can be used to enhance human operations. For Sarcos, the dream began in the 1980s as a spin-off from a project conducted by the University of Utah.

The University was researching and working with the augmentation of human prosthetics. “Just think of prosthetics as electrically actuated pieces of machinery, paired with the human body, that allow the human to do things he/she couldn’t do without the actual device,” Wolff says. “That notion truly frames the whole context for who Sarcos is today as a company—this idea that you can use an intimate knowledge of the human body such as how it moves, to the biomechanics, and then use technologies to augment humans and make them safer and more capable in what they do.”

Three decades later, Sarcos has evolved beyond prosthetics to humanoid robotics, creating humanoid robots in the 1990s, followed by a contract with the Department of Defense to create exoskeletons in the aughts. “Initial funding for the exoskeleton came from DARPA, and we continued getting funding from a variety of sources in the Federal Govt,” says Wolff.

From prosthetics to robots

From 2007 to 2014, Sarcos operated under the name Raytheon Sarcos―the robotics division of defense for civil and cybersecurity technology. During this period, Raytheon Sarcos focused exclusively on developing leading-edge technologies for use by US governmental agencies. When Congress later defunded efforts the Pentagon had been involved in, the exoskeleton project went out the window and the company soon announced its business acquisition, led by former Raytheon Sarcos president, Dr. Fraser Smith.

Wolff was already an internationally recognized technology and telecom entrepreneur within the sector, and he set a management buyout in motion―where the leadership team and employees ended up acquiring the business. “That buyout created what Sarcos is now. At that time, we decided to focus on all the technology that had been developed for the purpose of becoming a commercial robotics company producing mobile robots that could augment humans.

“We set out to productize the core technology that we had already developed, which was invested in attaining the best of both worlds. How could we combine human intelligence, instinct, reflexes, and the use of our senses, with the strength and endurance and precision of machine robots? And that’s where we are today.”

Under Wolff’s leadership, Sarcos was able to gain corporate support by 2016 from leading companies across a wide range of industries―such as Caterpillar, GE Ventures, Microsoft, and Schlumberger―which boosted Sarcos with growth capital to expedite the commercialization of its products. Sarcos then went on to secure Series B funding from a consortium of investors including Sarcos’ prior investors, Caterpillar, GE Ventures, Microsoft, and Schlumberger in 2018. Today it remains majority-owned by its employees and qualifies as a small business.

The line of innovative products currently in the works is a culmination of years of hard work and the exceptional advancements they were able to make within the complex worlds of electro-mechanical and biologically-inspired engineered systems. To date, over $275 million has been invested in the company’s development, which has generated more than $350 million in cumulative revenues and resulted in 140 issued patents within the Sarcos portfolio.

But it’s been a challenge. “We’re essentially always working to bring a whole new product to market. Most people don’t even know they need your product because they’ve never thought about it as a possibility. Our focus has been to build deep, meaningful relationships with groups in each of the key verticals that we believe Sarcos can bring value to, and go in deep with them. We want to invest a lot of time and have them as our earliest customers. In turn, we get feedback from true partners, not just someone who’s curious, but a partner who’s invested in our success. This allows us a tremendous sense of credibility and also gives us the power to continue redefining our work so we bring the product to market at its very best.”

Furthering their partnership commitment, Wolff formed an industry-focused Exoskeleton Technical Advisory Group dedicated to driving the development of powered, full-body exoskeletons. Their X-TAG is now comprised and backed by senior executives in leading innovative companies such as Bechtel, BMW, Caterpillar, Delta Air Lines, Ford, GE, Schlumberger, and Toyota. As the global leader in its class, Sarcos is able to work with and deliver a return on investment for this compelling range of industries, including automotive, aviation, advanced manufacturing, oil and gas, power generation, construction, logistics, mining, defense, public safety, and infrastructure inspection.

Creating robot suits for commercial use

Sarcos has had its hand in a wide variety of applications throughout its longstanding company history: well-known theme parks around the world, iconic robotic fountains at the Bellagio Hotel in Las Vegas, Nasa spacesuit-testing equipment, prosthetic limbs and MEMs sensors, as well as advanced humanoid and dinosaur robotics. But its latest release, the wearable Guardian XO exoskeleton suit, is arguably the company’s best work to date.

“Our team is now the world’s only successful producer of a battery-powered, full-body exoskeleton—the Guardian XO—that augments human performance with enhanced strength and endurance in both the upper and lower body. We’re in the home stretch of bringing our commercial exoskeleton to market, which will allow you to get inside of it with very little training, allow you to lift up to 200 pounds with no stress on the human body, allow you to avoid injury and fatigue in the workplace, and to do a lot more than we can do on our own.

“It’s a win for everybody—for individual employees, for companies that hire those employees. Across the board it’s a very novel, unique way of increasing productivity while decreasing the physical toll that’s been placed on so many human bodies,” Wolff says.

This powered, full-body robot suit is based on 20 years of research and development, and the prototype is being recognized as one of the world’s leading innovations. “The Sarcos Guardian XO exoskeleton represents the next step in the evolution of high-performance, highly dexterous, mobile robots. And we’re the first and only company in the world to produce a full-body, powered exoskeleton that increases stamina and strength and letting the operator perform hours of physical activity that would otherwise be impossible for a single human to perform,” Wolff explains.

Creating robotic suits for the government

But the suit has proved interesting to the private sector as well. In 2017, the United States Air Force awarded Sarcos a Small Business Innovation Research (SBIR) contract to develop a full-body exoskeleton for logistics applications. A second contract was awarded in 2018 for Sarcos to deliver a more robust version of its full-body exoskeleton robot, with a specific focus on use cases relevant to Air Force logistics applications. The next year, a partnership with the Puget Sound Naval Shipyard (PSNS) CRAD was formed to deploy robotic technologies for use in naval shipyards. Soon after, the United States Special Operations Command (USSOCOM) awarded a contract to Sarcos to deliver a pre-production, autonomous version of its Guardian XO full-body exoskeleton, leading to the US Marine Corps’ contract for an Alpha version of the Guardian XO.

In addition to the full-body suit, a hand-powered set of robotic arms―similar to the upper-body portion of the Guardian XO―have attracted attention industry-wide. With two variants―the Guardian DX defense variant and the Guardian XT commercial variant―the arms can attach to a variety of mobile bases and are set to launch with commercial partners in 2021.

Both versions provide a combination of dexterity and strength for the operator. Mounted on an agile vehicle base that can be powered by batteries, diesel, or natural gas, the single or dual-armed system can lift and manipulate payloads up to 1,000 pounds with no human effort. Using force reflection technology, the operator can feel the scaled forces experienced by the robot arms, whether he or she is riding inside the robot, or the system is teleoperated from afar.

These machines are intuitive, robust devices that can be safely operated even in dangerous or hazardous environments. They require minimal training to use and enable the handling of difficult-to-manipulate objects with a high degree of control. It’s been demonstrated to improve on-site handling and assembly significantly, safely completing tasks in minutes that typically take several workers many hours to perform.

Accolades for the company continue to amass. Sarcos was named a 2020 and 2019 Robotics Business Review Top 50 company, noted for being among the “Top 50 Companies Making Significant Contributions for the Robotics Industry.” Fast Company also named the Guardian XO a Finalist in its 2020 Innovation By Design Awards; and several media outlets, including WIRED, named it a top innovation at the 2020 CES.

Most recently, the suit gained the attention of Time Magazine, who named the prototype among “The 50 Best Inventions of 2010” and added the new Sarcos device to the list of “Top 100 Inventions of 2020.” “As we approach the commercial availability of our Guardian XO industrial exoskeleton robot, being chosen for this award provides further validation of our product and its potential to revolutionize the workforce by reducing occupational injuries and addressing labor shortages globally,” says Wolff.

Sarcos continues to disrupt the industry and maintain its position as the competitive leader in robot production worldwide. “A lot of companies believe that what we’re trying to do is impossible, so that’s a head start within itself. If others don’t think it’s possible, they won’t spend the time trying to catch us. We’ve invested hundreds of millions of dollars into our technology. Even the Federal Government could see our vision and chose to fund us early on so we could go on this 20-year journey,” Wolff says.

“We’ve found ourselves in this unique position of having a core engineering team who’ve developed competent robots with research that dates back decades, coupled with government support and commercial partners. That history makes it challenging for others to compete. That doesn’t mean it won’t happen, but I think we have a pretty healthy lead.”