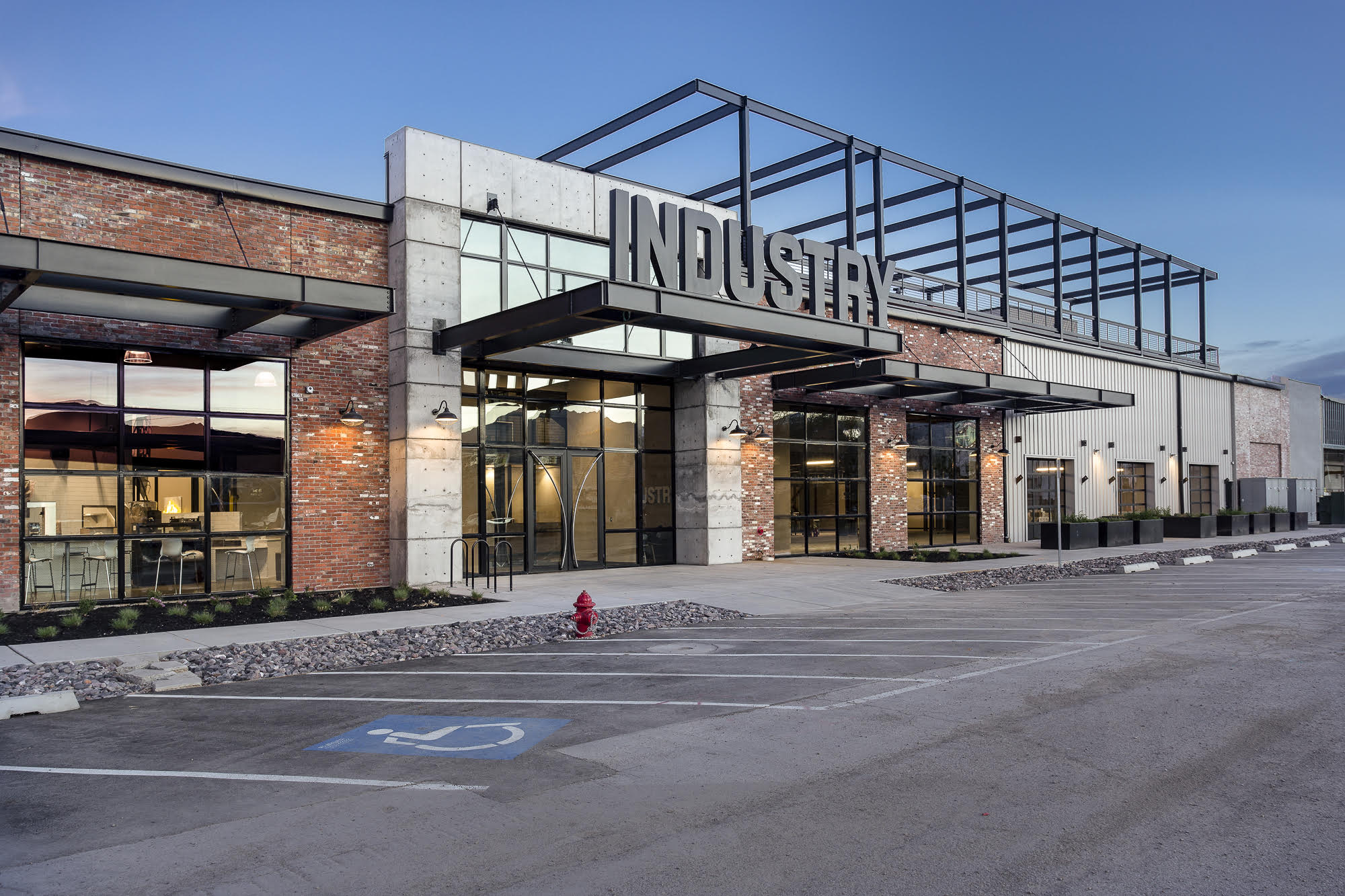 Ellen Winkler thinks Salt Lake City has all the workings of a tech hub.

The city’s urban environments are vibrant and filled with restaurants, art, and entertainment, Winkler says, but with all manner of outdoor recreation just minutes away. Salt Lake is a city with something for everybody—even the CEO, with a nearby international airport and top tier-tech talent to boot. “Salt Lake City is what most people think Denver is, a city that is truly in the mountains,” Ellen’s husband Jason, agrees.

As business owners and mountaineers themselves, Jason and Ellen originally set up shop in Jackson Hole, but found that their location contributed to high employee turnover. So they moved to Denver and while they fell in love with the city, found that it didn’t offer the exact lifestyle they and their employees were seeking. Salt Lake City did.

This outdoor urban environment continues to draw new businesses to Salt Lake City. But for fast-growing, homegrown tech companies, Salt Lake City is a harder sell. For locals, Lehi remains both the physical and symbolic headquarters of the Silicon Slopes.

But times are changing. Salt Lake City has set its sights on bringing in more high-tech industry, particularly in life sciences. And COVID-19 could end up being a blessing in disguise, perhaps easing some of the barriers that have historically made real estate in Salt Lake City a difficult, if desirable, acquisition for tech entrepreneurs.

For Ellen and Jason Winkler, the founding team behind modern office and mixed-use development chain Industry, Salt Lake City was an obvious fit for their next location. The companies they work with—firms with headquarters in places like San Francisco and New York wanted to open offices in Salt Lake City to take advantage of the local lifestyle and talent pool. “If you really want progressive living, Salt Lake is an amazing place to call home,” Ellen says.

But when out-of-state companies look to open an office in Utah, they think of Salt Lake City, not Lehi or the surrounding suburbs. Of the companies looking to relocate to Utah this past April, about a third were tech-related in some fashion, according to Michael Flynn, chief operating officer at economic development consulting firm EDC Utah. “And there are a lot of them that would view Salt Lake as the center of the tech universe,” he says.

“Tech companies locate where they can find talent, and where they can recruit talent, and Utah checks a lot of boxes,” says Dee Brewer, executive director of the Downtown Salt Lake City Alliance. Utah in general offers a plethora of outdoor recreation, an educated workforce, and a high quality of living at an affordable cost—a selling point if you plan to bring in talent from out-of-state.

Salt Lake City, as the only truly urban environment in the state, offers these benefits in addition to arts and entertainment, restaurants and nightlife, according to Andrew Wittenberg, marketing and research manager for Salt Lake City Economic Development. This can be critical to companies from other urban centers, which may prefer this urban environment.

“We’ve had companies want employees to live in multi-tenant housing and be able to walk to bars and restaurants,” Flynn says. Some have environmental goals that can only be achieved in Salt Lake City due to questions about the availability of public transit and neighborhood walkability.

Salt Lake City may also be more desirable to some companies trying to reach diversity goals, says Blake McClary, president of the Silicon Slopes Salt Lake City chapter.  The city not only draws companies from out-of-state but also residents, which means that Salt Lake City is more diverse than other regions, including the tech centers in Utah County.

Working women, McClary says, may also find Salt Lake City to be more friendly and populated by like-minded individuals, and so it may be easier for companies looking for qualified female candidates to find them in Salt Lake City. “Generally, I hear from companies moving to Salt Lake saying they want to be here because [while] it’s still pretty homogenous… you get more religious, gender, and ethnic diversity in Salt Lake County than in Utah County,” McClary says.

The most telling sentiment of all, Wittenberg says, may be the reality that good office space can be hard to come by in Salt Lake City. There are more buyers looking for space than square footage available for rent, resulting in an office space vacancy rate of around six percent.

The overall amount of office space available in downtown Salt Lake City has increased in the last decade, according to Megan Cambon, a market analyst for the CoStar Group. But almost all of that increase has gone to four- and five- star rated real estate—the high end of the market. In many cases, she says, that increase has come at the expense of the more affordable one-, two-, and three-star offices.

This poses a logistical challenge for younger companies, companies looking for large offices or even full-scale campuses, or, well, anyone on a budget. As a result, Lehi may be a more attractive option to companies in these categories—including many Utah startups.

It’s not that nightlife and work-life balance don’t matter to this particular subset of tech companies, McClary says.  But for many tech companies, it may be easier to find what they’re looking for in suburbs like Lehi, where office spaces tend to be more affordable and more available thanks to a nine percent vacancy rate, than in the downtown area.

“If you’re doing a ten-person office,” McClary says, Salt Lake City’s constrained real estate options are “probably not a big deal. But if Pluralsight wanted to move its entire campus to Salt Lake, that would be untenable. They couldn’t find anything.”

The intense demand for Utah real estate creates a unique challenge for Salt Lake City planners, Wittenberg says. “We want to be responsible about how the city grows,” he says. “We’re not going to wildly build beyond our capabilities.”

This isn’t just with respect to issues like air quality or sustainability in an environmental sense, he says, but also in a financial sense as well. Demand has already begun to push housing prices skyward—a development that has, in turn, made downtown living less affordable and eroded some of that Utah value proposition of high quality living at a low cost.

This dynamic is occurring on a commercial level as well, and that’s what’s most concerning to Salt Lake City officials. With prices on the rise, landowners and developers are under pressure to redevelop and expand skyward. That could put historic buildings and longtime small businesses at risk if they’re pushed out by higher offers, which could, in turn, erode the unique vitality that made Salt Lake City attractive in the first place.

“That’s why it’s crucial to maintain the environment we have now,” Wittenberg says. “We don’t want to get into a situation where it’s a snowball, something the city can’t sustain and it looks like something we can’t recognize.”

That’s why some developers, like the Winklers, have put their creativity to the test by trying to remodel old warehouses or other industrial sites to preserve the history while meeting demand. “We’ve seen some of those old buildings demolished or repurposed into other kinds of space this cycle,” Ellen Winkler says. “This has opened the door for developers to consider new ideas and even new neighborhoods, such as the Granary District where Industry’s Salt Lake City office is located. We are going into more of a gritty neighborhood, and trying to welcome people back into a neighborhood that is forgotten about,” she says.

“Salt Lake has room,” she continues. “We’re just trying to get more people to recognize these areas.”

Other projects, like the 95 State at City Creek, are going vertical—which takes time and capital but will create more office space in the long run. Still, others are expanding the boundary of Utah’s urban core to cities outside Salt Lake proper, building high-rises in between Salt Lake City and Lehi in municipalities such as Sandy.

“The value proposition being as good as it is here, combined with all this development—we’re going to have the best of all worlds” within a few years, Flynn says. “There is a universe where there are better times ahead.”

One uncertainty remains. Though the long-term consequences of COVID-19 remain to be seen, its impact is already being felt within real estate markets. One month into the pandemic, Flynn says, about 20 percent of the company relocations in which he was involved had already been put on hold. And long-term, he says, it may change the way we think about office space.

The debate around whether it will increase or decrease demand for office space remains unclear. On one hand, Brewer believes it’s possible that COVID-19 could result in the death of open office concepts, bringing back cubicles or similar arrangements, and with them, the need for more spacious office floor plans.

Brewer believes the value of cities as gathering places remains unchanged. But will those gatherings take place in a new form? “Cities are not going to be dismantled based on what we’re experiencing,” he says. “They will be re-engineered.”

On the other end of the spectrum, Wittenberg says Salt Lake City is envisioning an economic development strategy that targets companies in the life sciences sectors—businesses that require physical laboratories and on-site operations—just in case businesses in other tech sectors such as software engineering realize “they don’t mind the teleworking aspect, and may have 25 percent of their workforce stay at home.”

Jeff Rossi, executive director of tenant representation in Cushman Wakefield’s Intermountain Region, expects that the long-term result of COVID-19 will be a mix of these two realities, with corporate leaders increasing work-from-home opportunities, and likely looking for offices that are both more spacious and more flexible.

This could lead to more opportunities in suburbs in general, and in Utah in particular, Rossi says, because Utah, like the suburbs, has more land available for low-rise, lower-occupancy offices. New office designs could be implemented faster in suburbs as well because red tape in the city can cause the development of a project that might take 3-5 years to construct outside the city to span a decade.

While he expects balance to eventually return, these trends will be intensified in the short term, Rossi says, because many companies are currently avoiding long-term commitments in favor of short-term, flexible options while they wait to see how the pandemic will ultimately shake out. While Cushman Wakefield is usually pursuing tenancy deals for 30 some commercial clients at any given time, Rossi said that as of mid-July, he was down to 13.

Many companies are currently concerned about the safety of high-rise office buildings, where thousands of workers typically shuttle in and out of the same small space every day. And with the nightlife closed and sporting events canceled, much of what makes downtown Salt Lake City unique has lost its appeal, Rossi says, leading many companies to decide that the suburbs are a better solution.

Being a smaller city with room to spread out, Rossi believes that long-term, Salt Lake City and Utah at large will benefit from this shift in direction.

“I think we’re in a great position,” he says. “With so much going on from the perspective of investment downtown, with the buildings going up and the convention center and airport and granary district and new apartments, I think we will be very well positioned as a receiver for the post-COVID new normal.”