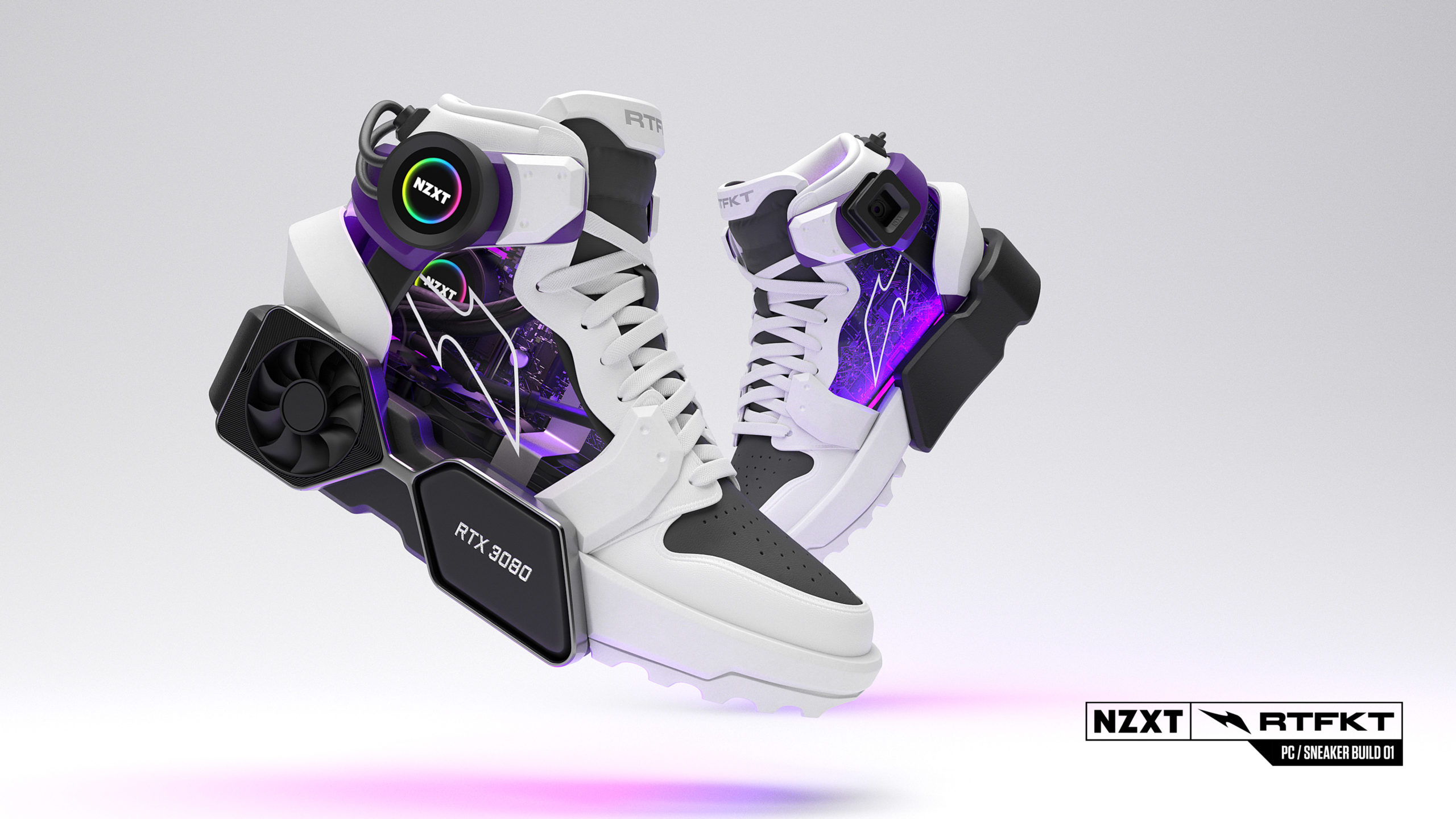 RTFKT is selling NFT cybersneakers to the metaverse

The Covid lockdown was good to Chris Le. The Salt Lake City entrepreneur sat in his basement during those 2020 months, often wearing virtual reality goggles, building virtual products on his computer. A year later, he became a multi-millionaire selling shoes—without even a factory to make them.

The 32-year-old Utah native is one of a handful of pioneers of the burgeoning industry of non-fungible tokens or NFTs. Pre-Covid, his startup RTFKT Studios (pronounced “artifact”) landed a pre-seed investment of $1.5 million from digital asset merchant bank Galaxy Digital and San Francisco VC fund, GFR Fund.

Then during lockdown, he and his co-founders huddled over separate computers across the globe to build virtual sneakers that could be traded via NFTs. One founder, Benoit Pagotto, a UK branding consultant, worked from a shared 290-square-foot flat in Paris, while luxury fashion guru Steven Vasilev worked out of Mexico. Le huddled in his Salt Lake City basement.

By October 2020, RTFKT sold its first pair of cyber sneakers for 30 ether on the Ethereum network for the equivalent of $90,000—setting a record for the highest-paid digital fashion item. In April, the startup sold 600 NFTs of sneakers and sold out in just seven minutes—reaching a total revenue of $3.2 million.

Minting NFTs for the virtual world

An NFT is a unit of data stored on a digital ledger, called a blockchain, that certifies a digital asset to be unique and therefore not interchangeable. Le makes it more concrete by explaining it this way: If your kid has ever asked you for your credit card to buy “skins” or decorative outfits for their avatar in the video game Fortnite, then you unknowingly bought NFTs.

These blockchain-based collectibles have exploded in the past couple of years—as people trade virtual goods, such as character skins for games, fashion, real estate, and art via NFTs, a market expected to grow to $190 billion by 2025.

It’s not just RTFKT. Video game skins have proven to be one of the hottest collectibles in the virtual world―and sneakers are just as popular in the physical world. Le says he and his team simply merged the video game aesthetics with fashion and used NFTs to sell them—and as a result, ignited a flame. “It was all for fun,” says Le. “I didn’t know it would blow up that fast.”

NFTs first emerged in 2017 when Canadian company Dapper Labs started CryptoKitties, a game in which people collected, bred, and traded goofy cartoon cats―at one point, one cat sold for $100,000. NFTs blossomed with Cryptopunks―collectible pixel images of misfits and eccentrics―and NBA Top Shot, a platform to trade NBA video collectibles. People can now buy digital art that’s tracked and verified using blockchain on Nifty Gateway and Rarible, and they can collect and trade digital versions of luxury brands such as LVMH and Gucci.

All of this blossoms in the metaverse―a collective of virtual worlds that provide social, entertainment, and shopping with digital storefronts a la Minecraft. Digital avatars are popular in Snapchat’s Bitmoji, Apple’s Memojis, and Roblox’s Loom.ai. Now Apple is developing AR glasses that will fuel that blend of physical with digital reality, and Facebook and other Silicon Valley companies are betting their futures on the metaverse.

Building sneaker hype in the metaverse

Le began his NFT career in 2007 as a 17-year-old at Bingham High School, when the Def Jam music label picked up his graphic designs. Soon, he began directing and producing music videos and produced his first film, Zombie Hunter, starring Danny Trejo in 2013.

Le then moved into 3D design for the videogame industry and began making skins for avatars for the video game “Counter-Strike” and others. He noticed how kids were collecting and selling these skins on the Steam Community Market, a digital marketplace that allows users to buy and sell certain in-game items. He received a tiny royalty each time the skins were sold, which created a substantial financial windfall.

When Twitch gamers began talking about collecting physical sneakers, he saw a new market: gamers who were also sneakerheads. His designs went viral, and RTFKT was born to sell those sneakers using NFTs so people could wear them virtually in a variety of video games and inside the larger metaverse or virtual game.

“Everything we did went insanely viral,” says Le. Billionaire Elon Musk has a pair of those $90,000 cybershoes—futuristic-looking, silver metal platform ones. Other “drops” of sneaker styles sell for anywhere between $500 to $100,000 a pair.

RTFKT’s cybershoes themselves are funky: one pair flaunted purple soles, silver edges akin to metal armor, and jagged accents with patterned graphics that look as if they were culled from a video game. Another pair featured black and orange block designs that look modeled after items in a Minecraft world. They collaborated with popular designers, including Jeff Staple and young NFT artist Fewocious.

Le admits he didn’t even know who Andreesen Horowitz was originally and his team ultimately had to turn away investors. “Everyone threw term sheets at us,” says Le.

Major luxury brands also came calling, Le says, asking to partner up. But RTFKT saw a “cash grab” in their offers, as it seemed the brands wanted to ride the coattails of the popular new technology trend. RTFKT is working with Janet Jackson on a line of cyber sneakers, however, and the company inked a partnership with EA Games to design avatar skins for its game Apex Legends, Le says.

The company is now merging the physical world with the digital by enabling an NFT to act as a ticket for a physical product. RTFKT does this with “forging events”—akin to a blacksmith’s forge—in which a real physical pair of sneakers is 3D printed and sent to the NFT owner.

The startup is also establishing its own luxury brand by creating virtual jackets, charms, and other fashion items that can be “flexed” in the virtual world and eventually worn in real life. Le’s Punks Sneaker Project allows Cryptopunk holders to mint their own sneaker based on the cryptopunks they hold.

Cashing in on the cryptocraze

Real money has been made from cryptocurrency trades, says Curtis Morley, a longtime Utah tech entrepreneur and now director of the University of Utah’s Kahlert Initiative on Technology. He cites several university donors who’ve had bitcoin windfalls and a friend who turned crypto cash into a shiny yellow Lamborghini.

“We’re in the gold rush of crypto and NFTs,” says Curtis. But he believes that hype will cool, and crypto and blockchain will become more standard in society and business.

The importance of blockchain goes beyond betting on whether the values of NFTs or cryptocurrency rises. Blockchain has the potential to transform business and assets. Anything that can be copyrighted can be turned into an NFT: art, music, IP, or designs. The blockchain creates a way to track and distribute the rights using a distributed, decentralized network, where no one can change or manipulate the information. “It creates this virtual, unhackable environment with sovereign ID and ownership,” Curtis says.

In the years to come, every copyrightable work could be distributed in the blockchain, and in the next five to 10 years, every government will recognize its own cryptocurrency. Elections and results could also be preserved in the blockchain. People might one day use cryptocurrency credit cards to pay for everything from restaurant tabs to city services.

Yet cryptocurrency and NFTs are still foreign to most people. It’s still a cumbersome process to get a crypto wallet, download a Chrome extension, set up a Coinbase account, and understand the platforms for buying and selling assets. “You’d be surprised, but only around 200,000 people are heavily involved,” says Everett Kohl, founder of Dbilia, a Canadian company making a new platform that makes it easier to access NFTs and cryptocurrencies.

The University of Utah is preparing for the next wave of technology and last year launched a new cryptocurrency and blockchain program through the Kahlert Initiative on Technology. The blockchain class is open to any student, regardless of whether the student majors in business, English, or pre-med. “We’ve had a fantastic response,” says Curtis.

Le also intends to start working with young creators in Utah to ensure they understand NFTs, the potential to innovate and be compensated for their designs. His firm has generated $7 million in revenue this year, created assets worth $22 million on the blockchain, and delivered $3 million back to creators.

After all, Le—who spends much of his day wearing VR goggles chatting with collaborators, designers, and collectors in the metaverse—says the metaverse is the future. “It’s the perfect place for the creative,” Le says. “And I want Utah on the map.”