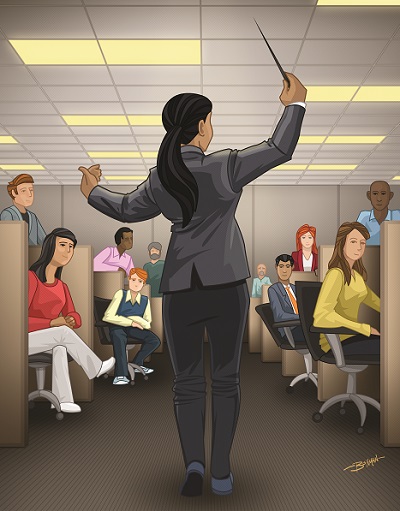 When asked what makes a great leader, Carine Clark, CEO of Banyan, shares, “Someone recently said to me, ‘I don’t understand why people don’t do what I tell them. I’m the boss.’”  Clark then replied, “You know that Lincoln freed the slaves, right?”

Clark’s no-holds-barred response reveals truths she has learned throughout her career as an executive at companies like MaritzCX, Allegiance and Symantec—and lessons she gleaned from her father, a colonel in the U.S. Army.

“My father was always calling out what a leader does, showing us good examples, bad examples,” says Clark. “He taught us that a leader may be in charge because of a rank, but people still don’t have to follow you. A leader needs to be someone who is an example, who also inspires people. The best leader is someone you want to follow when you don’t have to.”

From a first supervisor promotion all the way to C-level advancement, leadership opportunities come a-knockin’ for many people. But does moving up the ranks necessarily open the door to excellence in leadership? What are common mistakes leaders make—and how can those pitfalls be avoided? How can folks raise their leadership IQ and truly practice great leadership?

It all starts with defining the leadership role. Kevin Ames, director of speaking and training for O.C. Tanner, a Utah-based leader in employee appreciation and leadership, explains that a leader can be 1) a dictator, focused on command and control, 2) a travel guide, leading employees on a valuable journey, or 3) an orchestrator, integrating the talents of different people to succeed with collective purpose, collective power and collective passion. When leaders rise above the base instinct to control others, when they go beyond merely guiding employees, when they ultimately take the baton and empower others to perform in harmony, that’s where true leadership takes place.

Leaders also “get results—in a way that fosters trust and credibility,” according to Jeff Weber, senior vice president of people and places for Instructure, the Utah-based provider of platforms like Canvas and Bridge. Weber emphasizes that leaders are people who are “open, willing to listen to new and different ideas, and who focus on developing others, believing that the success of others is valued as much as individual success.”

This idea of focusing on others is powerful, according to Alex Shootman, CEO of Workfront, a Utah-based project management software company. “Some leaders think, ‘What are people going to do for me today?’ Then there are leaders who ask, ‘What am I going to do for my folks today?’ When we see our purpose is to help our folks be more successful, and we occupy that posture more often than not, we end up leading them.”

This employee-centric approach to leadership is something that’s backed by research. Rodd Wagner, vice president of strategy for employee engagement and customer loyalty firm BI Worldwide, has written the book on connecting with employees—literally. As the author of Widgets: The 12 New Rules for Managing Your Employees as if They’re Real People, he references research that reveals when employees see their leaders as invested in their happiness, those employees are more likely to work harder.

“There’s a pressure there at the senior levels, that it should all be about return-on-investment and company performance, and to be concerned with the happiness of your employees makes you a soft and ineffectual leader—when in fact the opposite is true. More enlightened leaders realize this is a reciprocal arrangement: You want them to be driven by the mission of the organization, and the way you do that is to say, ‘We want you to be happy and have a fulfilling life.’ Leaders who do that get paid back many times over by employees who feel a moral obligation for the organization,” says Wagner.

For many leaders, a common mistake in hitting that employee-centric stride comes from making assumptions. First, there’s the easy assumption for new leaders that they should pass on their own personal approach to the work.

“When they make the move to leadership, leaders think they are going to try to teach people what they did to be successful,” says Ames. “But that’s not going to relevant to the followers. The challenge is to transition from an independent achiever to this idea of collective achievement. Leaders have to reframe their thinking and inspire others to achieve in the way those individuals want to, a way their skillsets are brought to the forefront. They have to discover what’s going to cause other people to achieve effectively.”

There’s also the assumption that leaders need to have all the answers. “We’re all human, and nobody knows everything. Leadership is as much about the ability to be vulnerable as it is to be strong, as much about being humble as it is about being confident,” says Beth Noymer Levine, founder and principal of Utah-based SmartMouth Communications and author of Jock Talk: 5 Communication Principles for Leaders as Exemplified by Legends of the Sports World. “We live in a world where people pick it up anyway. You can’t fool anybody. So it’s powerful when a leader is willing to say, ‘Hey, I don’t know; I’m willing to work on that together.”

“No sneaky leaders out there,” is how Dr. Trent E. Kaufman puts it. As CEO of Cicero Group, an analytics-based management consulting firm headquartered in Utah, Kaufman says leaders need to resist the temptation to “package things.” He explains, “You can’t slap lipstick on pigs and be a leader. You’ve got to package things correctly—yourself and your ideas. In order to lead, in order to have impact, you’ve got to be true to your word, straightforward.”

For seasoned leaders, Kaufman also cautions against resting on laurels. “Leaders assume that once they’ve demonstrated leadership, they are always a leader. Bad leaders get lazy. Good leaders wake up every day and re-earn their stripes, trying to add value every day, improve every day, get better. They’re very self-reflective.”

Listen up & lean in

That reflectivity can be a powerful accelerator for leadership. Wagner tells of an interaction he had after a presentation he delivered to a group of about 500 leaders: “A newly-minted manager reached out privately and said, ‘I’m worried that I’m not going to be an effective manager. I don’t know if I’m going to be any good at this.’ I said, ‘You’re going to be fine. The fact that you’re worried about it means you’re going to invest yourself in being a really good manager. You’re going to obsess over what your people want.’ It’s the people who take it too lightly, the people who don’t really evaluate themselves who end up irritating employees in the process.”

Wagner also recommends extending that introspection beyond oneself. “It doesn’t hurt to ask a trusted advisor how you’re doing. It can also be really useful to sit down and have coffee or lunch with someone who reports to you and say, ‘How could I be more supportive of you? What do you need? How are you feeling?’—all the questions along the lines of what we ask people in our research,” says Wagner. “It does a couple things: You get the info, and you also communicate to the person on your team that you are invested in being a better leader and you’re open to hearing their feedback.”

With her professional emphasis on communication, Noymer Levine is a big believer in asking—and listening to—employees. She offers parameters for that kind of communication, saying, “Establish trust. Make sure there are no repercussions for being honest. Then say, ‘I know I have some areas of weakness. What are some you’ve seen, and how do you think I can improve on them?’”

She says this kind of brave-yet-humble transparency can have an impact, especially with a younger workforce. “Organizations are increasingly being populated by Millennials. They want a seat at the table; they want that meaningful dialogue, meaningful contribution. I think that’s one way to create an environment where Millennials feel like they have a voice and are contributing.”

Just like surgeons would never operate on themselves, Kaufman likewise recommends turning to others for insight on improving leadership. He does advise, however, to weigh the perspective and experience of the source. “Listen to feedback, but especially if it’s from people who haven’t held that mantel, who don’t know what it’s like to have the buck stop with you, to wake up every morning with the responsibility of hundreds of people’s families and mortgage payments on your shoulders—if they’ve never felt that, they can prioritize the wrong things. Put the feedback through some kind of filter, make sure it’s going to help you improve.”

In the quest for better leadership, leaders often look to expert resources for ways to perpetually improve. Clark, who earned an EY Entrepreneur of the Year Award not long before taking on her current role at the Utah-based patient engagement company, prefers to study military leaders. “I’m a student of World War II,” she says, “I follow Patton, Eisenhower.” She examines key moments, like how as the Allied Forces’ Supreme Commander, Eisenhower weighed whether to “go or no go” with the D-Day invasion. Clark points out his humility as he sat alone in the mess hall afterward, reflecting on the far-reaching impact of the decision he had just made.

Kaufman leans toward personal improvement for leadership insights, and he credits Stephen R. Covey’s The 7 Habits of Highly Effective People for setting him on his professional trajectory. His father gave him the book when Kaufman was considering running for student government in high school. He was inspired to start tracking his goals and plans in a day planner, which he said helped him manage life “instead of my life managing me.” He went on to pursue a career in secondary education as a principal, followed by a change of course, earning a PhD in performance management at Harvard, and has enjoyed a second career in corporate leadership since.

Others turn to leaders they’ve encountered along the way to add to their leadership acumen. Weber says, “I’ve had the opportunity to work with and for many executive leaders who have all shaped my experiences and how I view the role of a leader.”

And others look to hard knocks for some of their greatest leadership lessons. Shootman, for example, shares the realization that “not everyone has to like you to be an effective leader, they just need to have the resources to be successful.” And Kaufman shares an early mistake—speaking ill of a colleague behind the co-worker’s back. When the colleague learned what he said, Kaufman discovered a painful truth: “You’ve got to value your team, value your teammates. You’re in this together. You’re all on the same team, so appreciate the people around you.”

IN A SENTENCE OR TWO …

Perhaps some of the best insights for enhancing leadership IQ can come from asking long-time leaders their advice, in a sentence or two.

“Embrace disruption. The best leaders are ones who embrace the disruption and understand the appropriate response to it.” – Carine Clark, CEO, Banyan

“The most important thing I‘ve learned is there is no replacement for sitting down and having one-on-one conversations quite regularly. Ask the 12 questions we ask at workhappier.com. Get inside their heads. Understand them. It’s the simplest suggestion, but it solves everything.” – Rodd Wagner, author, Widgets

“You’ve got to care deeply, to go beyond just understanding. You’ve got to have this emotional connection to your people. What we’re seeking out of people is engagement. When we help them engage with the organization’s higher purpose, when we make them feel deeply appreciated, they engage in great work.” – Kevin Ames, Director of Speaking and Training, O.C. Tanner

“Remember management is not a privilege, it’s a responsibility,” – Alex Shootman, CEO, Workfront