Out to Eat: New restaurant franchises are staking a claim in Utah

Retail follows rooftops—it’s a tried-and-true real estate maxim. When population in an area grows, new shops and restaurants soon follow. In Utah, population growth has led to a boom in multi-family housing and that, in combination with several flourishing new office parks, has drawn an extensive menu of chain restaurants that are new to the Utah market.

Just since the beginning of 2018, Tampa-based PDQ, a fast-casual chicken tender chain, opened in Lehi, and California-based Chop Salad announced it’s looking to expand into the Utah market.

The state’s fast-growing areas—like Lehi, Draper and Pleasant Grove—have drawn the attention of national chain restaurants, says Melva Sine, president and CEO of the Utah Restaurant Association. When evaluating a new location, she says, most restaurants look within a 10-mile radius of the location to ensure there’s enough people to support it. And Utah County is ground zero for a population boom.

While sheer population growth is one reason new chains are opening here, evolving food trends are also dictating what kinds of restaurants will be successful in any given market. Utah, with its youthful, active population, is drawing several restaurants with fresher, healthier options.

For instance, MAD Greens first came to Utah in late 2016. The fast-casual eatery offers customizable salads with a full palate of fresh toppings, like artichoke hearts, edamame, quinoa, Kalamata olives, feta cheese and avocado. The restaurant proved successful in its Lehi location and soon opened another location in Farmington.

Utah is home to “active-lifestyle people who are interested in taking care of their bodies,” says Rick Timmons, who brought CoreLife Eatery to Utah in the summer of 2017. 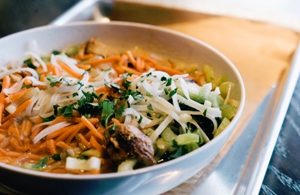 CoreLife offers greens, grains and slow-simmered bone broth dishes. Timmons, who first moved to Utah 12 years ago, discovered the New York-based chain just a couple of short years ago, when it only had five total locations. “We looked over the brand and over the menu and thought it would be a good fit for Utah,” he says.

So Timmons became a franchise partner with CoreLife Eatery and opened its first Utah location in Lehi. The chain is fast-growing—the Lehi location was its 12th, and six months later when Timmons opened a location in Sandy, that eatery became the chain’s 25th location. “Business has been above expectations,” says Timmons, who has plans to open locations in Millcreek and at City Creek later this summer.

Part of the brand’s appeal, says Timmons, is its commitment to fresh, wholesome ingredients. All ingredients are free of trans fats, artificial colors, sweeteners, other artificial additives and GMOs. Customers are sometimes surprised when they realize they can’t even get a soda at CoreLife Eatery, he says. But it’s hard to miss your Diet Coke when you have the option of fresh-squeezed Cucumber Basil Lemonade or Apple Cider Green Tea.

One benefit of working with a “smaller, upstart brand,” says Timmons, was the opportunity to help customize its menu for the Utah market. In particular, Timmons helped CoreLife Eatery beef up its kid’s menu, knowing the local consumer would demand it. “We developed several recipes, and now they’ve been implemented across the country,” he says. Additionally, he helped CoreLife develop some recipes with a stronger, Southwest-inflected taste profile.

Sine agrees there is robust demand locally for healthier, lighter fare. “Restaurants are thinking strategically about what the portion size should be, how can we make this product interesting yet healthy, something that’s of value in terms of price—because it seems like the healthier food, the more expensive it tends to be.”

Utahns are willing to pay a little more for food that is healthier, Sine says—but not everyone wants healthy options all the time. So while restaurants like MAD Greens, Slapfish and CoreLife Eatery are laser focused on that segment, other chains develop a wider menu to appeal to a broad consumer base, while incorporating healthier or lighter options for diners who are looking for that.

“Our diversity is increasing all over Utah, and so therefore people want more choices,” says Bogden. Those choices encompass globally inspired dishes and flavors, as well as upgrades to familiar standbys like pizza and fried chicken. But all of them have one thing in common: convenience. “It’s a fast meal but it’s a good meal,” she says. 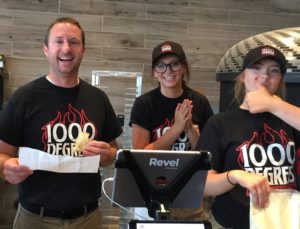 Want pizza? Just in the past two years, Blaze Pizza, 1000 Degrees Neapolitan Pizza, Marco’s Pizza, MidiCi: The Neapolitan Pizza Company and Mod Pizza have all settled in Utah. If pizza’s not your thing, Fatburger, Buffalo’s Express and Tropical Smoothie Café have each announced plans to expand into Utah in the near future. There are rumors that Hash House and Shake Shack are exploring the state, too.

Will Utah continue to see new chain openings at the same fast clip?

Yes—in the short term, says Sine. “Utah is the last frontier for a lot of these restaurant franchises.” With a growing population and a strong economy, she says, “This is the land of paradise. Get it while it’s hot!”

Despite that optimism, Sine says many chains are still cautious about Utah. Some brands, like Boston Market, did not thrive in the Utah market. “I don’t think you’ll see an explosion of chains coming into the market,” she says. “Although people are optimistic, there is still an air of caution about our market. … It’s still is a marketplace that you have to be strategic about.”

We may not see an explosion of new chains in Utah, says Bogden, but based solely on population growth, “I see just a need for more and more service in the food industry.”

The Silicon Slopes area and other booming centers, like the Station Park area, will continue to attract restaurants and retail. But don’t expect to see too much of that in Downtown Salt Lake.

“Downtown Salt Lake City continues to do well, but with a lack of opportunity—meaning not enough room—we’re starting to see more people doing redevelopments or backfill older restaurants and turn them into new, niche, chef-driven kitchens,” says Bogden.

As for the near future, Bogden won’t give anything away, but she says there are exciting new-to-Utah brands currently scouting the state.