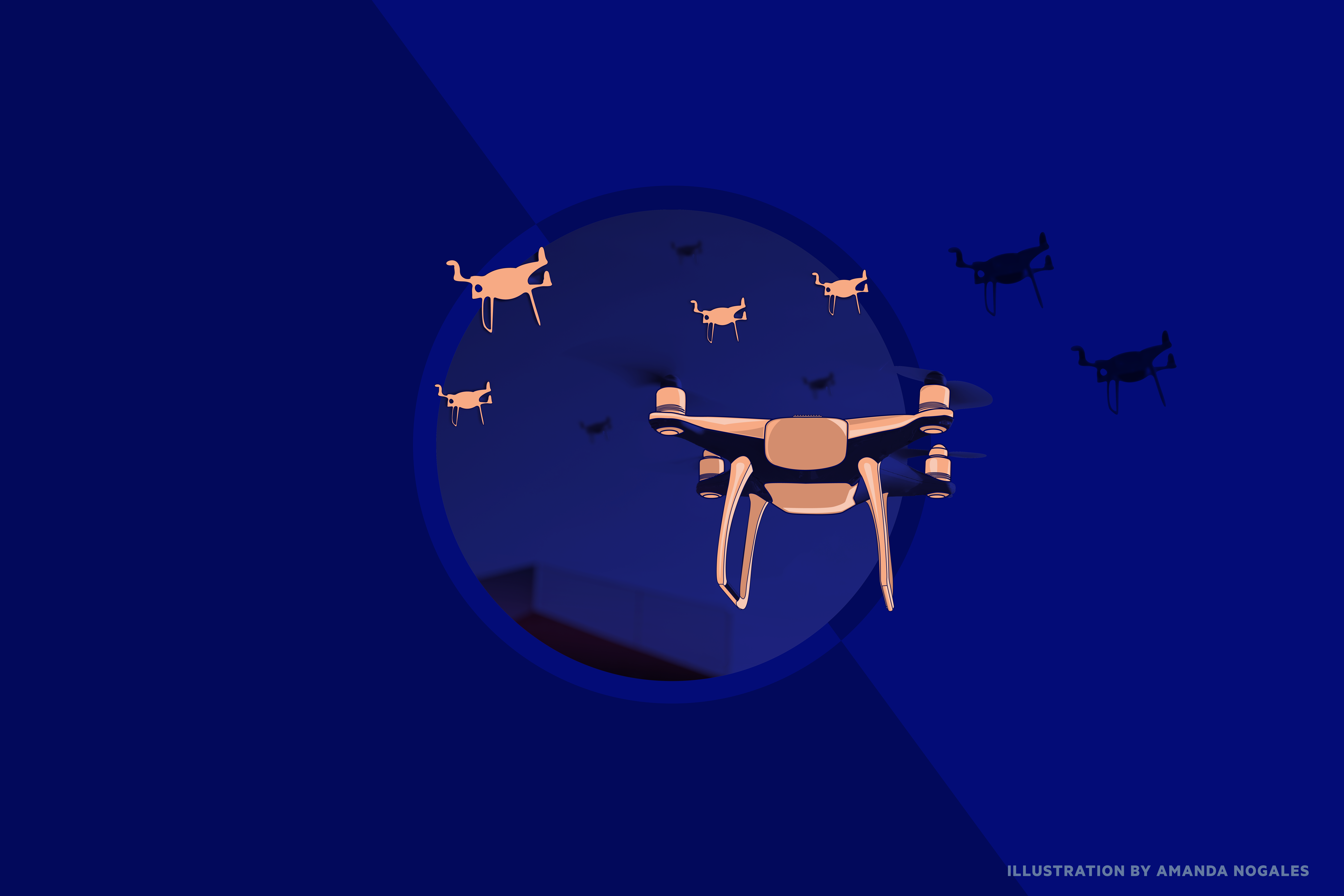 In 2018, then-FBI Director Christopher Wray included a mostly ignored line in his testimony before the Senate Homeland Security and Governmental Affairs Committee—one that felt worded as if someone was hoping to get on the record: When this happens, don’t say we didn’t see it coming.

“The FBI assesses that, given their retail availability, lack of verified identification requirement to procure, general ease of use, and prior use overseas, [unmanned aircraft systems] will be used to facilitate an attack in the United States against a vulnerable target, such as a mass gathering,” Wray said.

“Drones are here to stay. Drones do a lot of good things. But they can also get into the hands of people who do nefarious things,” says Bean, who points to Wray’s testimony when explaining the urgency behind his company’s offering, which he alliteratively describes as a system that “detects and defeats dangerous drones.”

Director Wray’s statement stands out for two reasons, the first being its unusually high level of certainty and specificity. The second reason is that despite the high level of certainty and specificity, several years have passed with no successful drone attacks on mass gatherings of civilians. As far as has been reported, none have been attempted.

Or have there been?

Thanks to Fortem Technologies, we may never know the answer to that question. Fortem’s drone killing systems have been deployed scores of times across the globe. With very few exceptions, two of which include the Ukraine war fighting Russian drones and Qatar for the 2022 World Cup, the firm is not permitted to disclose exactly where or with what results.

“We have 102 deployments around the world right now. We always ask [our clients for permission to disclose the deployment], and they always say ‘no.’ But we’ve been deployed at large international sporting events, including a big one in Tokyo, but I’m not saying any more about that,” Bean says with a sly chuckle. “And we’ve been deployed at nuclear facilities around the world and other places where a drone strike would be most consequential.”

This is a much bigger technological achievement than one might imagine because the Fortem technology must meet several challenges. It must disable rogue drones without putting people on the ground at risk, which rules out using traditional air-to-air weapons. In Fortem’s case, this literally means one drone capturing the other mid-air in a net attached to a parachute. It’s rather impressive to watch.

Fortem’s drones must also be able to make and act on decisions at speeds faster than those allowing for human input. The interaction begins, proceeds, and ends based entirely on the decisions of artificial intelligence. Fortem technology must constantly evolve to keep up with the same rapid pace of drone innovation that makes their legitimate use increasingly indispensable.

"We have 102 deployments around the world right now. We always ask [our clients for permission to disclose the deployment], and they always say ‘no.’"

A brief overview of the drone arms race Fortem confronts is instructive. Two or three years ago, Bean explains, anti-drone technology consisted of a person stationed at an event considered vulnerable to airborne attack, listening for signs of activity. If detected, that operator would jam a broad spectrum of frequencies to prevent further interaction. The drone would usually then fly back to its point of origin for use another day.

Drones then gained the ability to communicate via mobile data networks, which would also be jammed. These both interfered with much legitimate and vital ground-based communication while only deferring the threat.

The next step had the drone defense operator hack the offending drone and fly it somewhere safe for recovery and study. While effective and lacking unintended consequences, this approach was rendered obsolete when drones became flightpath pre-programmable. Communication with the ground was no longer required.

In response, anti-drone systems investigated jamming the GPS signals these pre-programmed drones depend on. This is also highly disruptive to a multitude of legitimate and essential technologies. In addition, drones are quickly developing the ability to navigate by recognizing features on the ground independent of GPS.

“Our disruption is that we don’t rely on the enemy drone to be receiving or emitting anything,” Bean says. “We broadcast a radar signal into the air that lets us see everything in the airspace. We can see it and then have the kinetic ability to stop it.”

Indeed, Fortem’s disruption may be why not one drone attack against a civilian gathering has been realized.

While the threat of terror attacks on public events is what captures our collective attention, it’s vanishingly unlikely that an outside organization was responsible if someone gets injured or killed in such a setting, says Mark Breen, director at Ireland-based Safe Events, a global firm specializing in safeguarding large music festivals.

“I can honestly tell you that counter-terrorism does not occupy a huge amount of our thinking and planning,” Breen says. “But I would say it occupies the correct amount.”

Twenty-one years after 9/11, the near complete lack of politically motivated attacks against civilians at large entertainment events seems to support Breen’s position.

“What we plan for, more than terrorism, is exuberance,” he says. “People say, ‘We’re fed up queuing, and so 20 of us are going to rush the gate and try, and most of us will get in.’ It’s bad behavior that hurts people, but they’re not intending to, and that’s what we see.”

Breen says every nation is assigned a threat level rating correlating to its likelihood of being a terror target, and Ireland enjoys a rating so low as to barely register. In contrast, the UK threat level is currently rated as “substantial,” which is midway between low and critical.

While the threat level in the US is not broken down by state, Utah most certainly rates lower than, say, New York. For that reason, terror attacks fall further down the list of concerns confronting Vivint Arena’s VP of Public Safety and Guest Experience, Blake Paris. He would know, owing to his professional history that includes a stint as VP of security at Brooklyn’s Barclays Center.

Paris mirrors Breen when he says his job is primarily one of knowing how to anticipate and account for the differences in human nature exhibited by enthusiastic individuals—who rarely attend large events intending to create a disruption—and the notoriously unpredictable nature of enthusiastic groups.

“Having an understanding of pack mentality, how people react versus how crowds react, is vital,” says Paris, who adheres to the philosophy that keeping fans from feeling frustration outside an event is the key to keeping them well-behaved inside. This, in turn, can be achieved by such low-tech solutions as the strategic arrangement of crowd control barricades.

“People will walk farther and not be bothered as long as they’re moving,” he continues.

Technology does play a role in helping Vivint Arena minimize certain potentially disruptive acts. Paris reveals that before and during events, his staff actively monitors social media channels for evidence of potential problems, such as fans vowing to engage in disruptive behavior if their post receives sufficient support. Paris makes a point of managing those situations quickly and personally.

“The look on their faces says, ‘How did you know that I just posted that? How did you know where I was sitting?’ and makes them really understand that we are watching and there are consequences,” Paris says.

That’s incident prevention. Regarding incident response, Vivint Arena has invested in technology created to facilitate communication between emergency responders even when operating without electricity or mobile phone service, with each responder’s phone able to act as a mini Bluetooth hub contributing to a larger, ad hoc network.

While Fortem Technologies remains on the front lines of a quietly waged fight to head off outlier attacks aimed at outlier targets, both Breen and Paris agree that, more broadly speaking, we’re now in a post-post-9/11 era as indicated by the pragmatic re-examination of normally competing goals.

“As time has gone on and we haven’t had any major incidents here in the US, our industry is starting to reconsider that fine line of safety, security, and guest experience,” Paris says, adding that the emergence of positions such as his own—which places the burden of finding answers to those questions atop the same set of shoulders—is evidence this event safety paradigm shift is well underway, backed by real momentum.