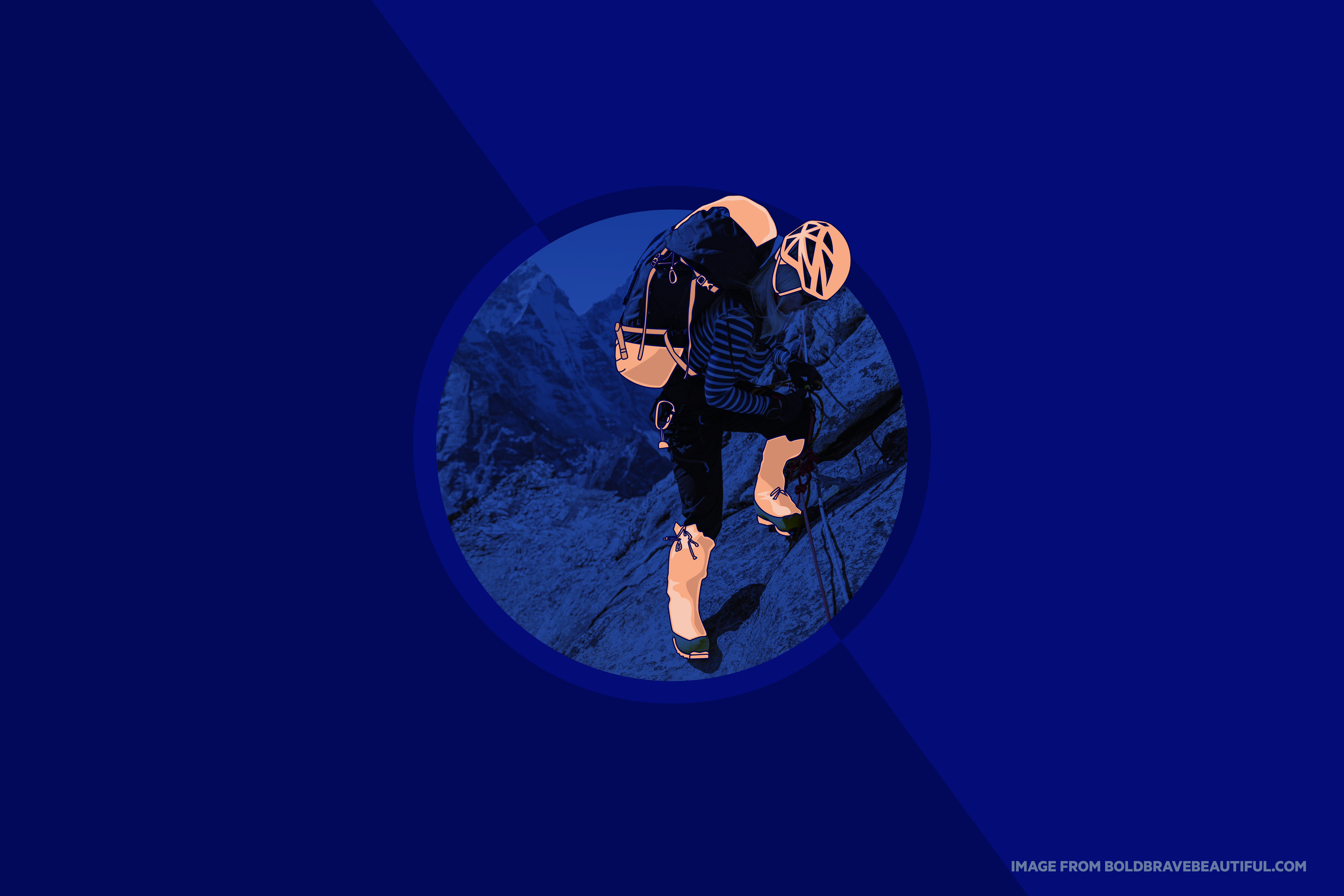 This Utah entrepreneur is about to set a mountaineering record

There’s a moment captured on Instagram when Jenn Drummond reaches the top of K2. With tears making their way down her windburned cheeks, she says between breaths, “It’s a lot of work…second time trying…I’m so grateful. Hard work works.”

The moment feels big—not just because the mountain’s daunting terrain has earned K2 the nickname “Savage Mountain,” or that team setbacks caused Drummond to abandon her first attempt at summiting the 28,251-foot peak the year before.

Drummond, a Utah-based entrepreneur and mother of seven, is making world history on her way to becoming the first woman to climb the Seven Second Summits. The Seven Seconds are the second-highest peaks around the globe, with one on each continent: Gora Dykh-Tau, K2, Mt. Kenya, Mt. Logan, Mt. Tyree, Ojos del Salado, and Sumantri (or Mt. Townsend—there’s a dispute over which peak qualifies as the seventh summit, so Drummond is going to climb both to eliminate any controversy).

It’s surprising to learn that this aspiring record-setter just started climbing a few years ago, and it’s even more surprising upon learning her life story. “I got into a car accident in 2018 that should have taken my life,” Drummond says. “The police rebuilt the accident 50 different times, and could not build one scenario with how I lived. When you have one of those life-shaking experiences, you realize, ‘I do not get to choose when I die, but I sure get to choose how I live.’ Life is a gift, I’m so lucky to be here. It shifts everything for you. I’m writing my obituary every day.”

That “every day is a gift” mentality is what led Drummond to take a fun challenge from her son to heart. While giving her then-nine-year-old son encouragement during a rough patch, she reminded him, “We can do hard things.” He quipped back, “If we can do hard things, then why aren’t you climbing ‘I’m a dumb blond?’” (This was his funny way of saying Ama Dablam, a famous peak in the Himalayas, Drummond explains)

This got her thinking: Why not climb that mountain? With encouragement from her coach, she decided to go for it.

Drummond was worried about the toll it would take on her kids. While they would be well cared for by her mom and live-in nanny, Drummond knew her absence could also have an impact on their schooling. She visited her children’s elementary school in Park City to discuss her concerns, and the school decided to create a program around Drummond’s adventure.

They launched an Everest Campaign, with Drummond speaking in classrooms about setting goals and challenging the students to identify their “Everest goal.” While on the mountain, Drummond held Zoom calls from basecamp answering students’ questions. And when she returned, she shared her experiences with the school. “The community got so behind me, my kids felt so loved and taken care of,” Drummond says. “It ended up being a project that was bigger than me.”

"That 'every day is a gift' mentality is what led Drummond to take a fun challenge from her son to heart. While giving her then-nine-year-old son encouragement during a rough patch, she reminded him, 'We can do hard things.'"

Her children were the catalyst for her current goal, as well. Drummond says one of her kids’ favorite books is the “Guinness Book of World Records,” and their love of the book spurred Drummond to joke with her coach that she should go for some kind of world record to impress them. Her coach took it seriously and suggested the Second Seven Summits. Drummond agreed.

Her first of the Seven Seconds was Ojos del Salado, which borders Argentina and Chile. The December 2020 trip took her from the Salt Lake City International Airport to Lima, Peru, and finally Copiapó, Chile. After a six-hour drive across the desert, she arrived at the base of the mountain. After a few days of acclimatizing hikes, she and her party made their way up the peak.

In her summit notes, Drummond opens up about the difficulties. “It was way more challenging in terms of mechanics than I expected…There were two moments when I thought I might have to come back another time, an idea that honestly felt like having to succumb to another stint in fiery hell. It was a difficult mental space to inhabit when the thought crept in.”

Mount Kenya in Kenya, Africa followed a couple of months later. The climb required extensive gear, and reaching the summit demanded a hike through what’s known as the Gates of Mist, which made using ice axes and crampons tough in low visibility. The way back down was even trickier under a pitch-black night sky with only headlamps to light the descent.

For her next climb, Drummond focused on K2. Her summit notes detail the complicated journey, which started in Utah on July 2 and ended in a truce with the mountain on July 26. Several setbacks, weather delays, team health issues, and more plagued the trip.

A few days before the team decided to forgo reaching the summit, Drummond writes, “Spirits are getting a little dampened around base camp, and there is a lower vibe in terms of what people seem to be willing to tolerate…The number of people here that want to attempt the summit again has been halved and there are longer weather delays to come.”

Drummond would go on to summit Gora Dukh-Tau and Mt. Tyree in 2021 before finally conquering K2 in January of this year. In November, she hiked Sumantri, and now she has just Mt. Logan and Mt. Townsend left.

As Drummond mentioned, her journey has become bigger than her. What started out as an Everest climb to share with her kids and their schoolmates has grown into a record-setting quest with thousands of social media followers watching.

Some followers wonder how a busy mother of seven in Park City—who also heads a financial services firm in Michigan—can squeeze in these monumental climbs. She says being super-organized helps her manage the day-to-day shuffle of work, kids, school, practices, and events.

As for conditioning, Drummond trains about five days a week. From strength training days to hikes on Mt. Olympus and Mt. Timpanogos, she mixes it up. She’s even known to “get vertical” by dropping a 12-inch step on the sidelines of her kids’ soccer games. “I’m the mom that’s going up and down on the step vs. standing still,” Drummond jokes.

In response to how one can afford to hike the Seven Second Summits, Drummond credits her career in financial services. “I think learning to save at an early age gives you financial resources years later,” she says. “I’ve also had people excited about the mission, about empowering other women, so they’ve made private donations to further the cause.”

For Drummond, it’s not just the thrill of the climb and the lessons learned that have kept her going—it’s the connections she’s made along the way. When she was climbing Ama Dablam, for example, she had a follower out of Ohio reach out who says she had always wanted to climb that peak, but as she was battling cancer, she was at least glad to experience it through Drummond.

“I walked prayer flags up the mountain for her, carried them down, and mailed them to her,” Drummond says. “She ended up passing away three months after. Her husband reached out to me, letting me know she kept the prayer flags in her hospital room, and she wanted to be buried with them. For all the hate you get on social media, for that one person, whoever that person is, I’m here.”

As for what’s next, Drummond is creating a fitness program to build a community of “vertical athletes,” where people can get the benefits of climbing activities by using the stairs, using a stepper, hiking—whatever it takes to get those vertical steps in for at least 40 days. She’s also writing a book, and our guess is it’ll have something to do with surmounting life’s big obstacles.