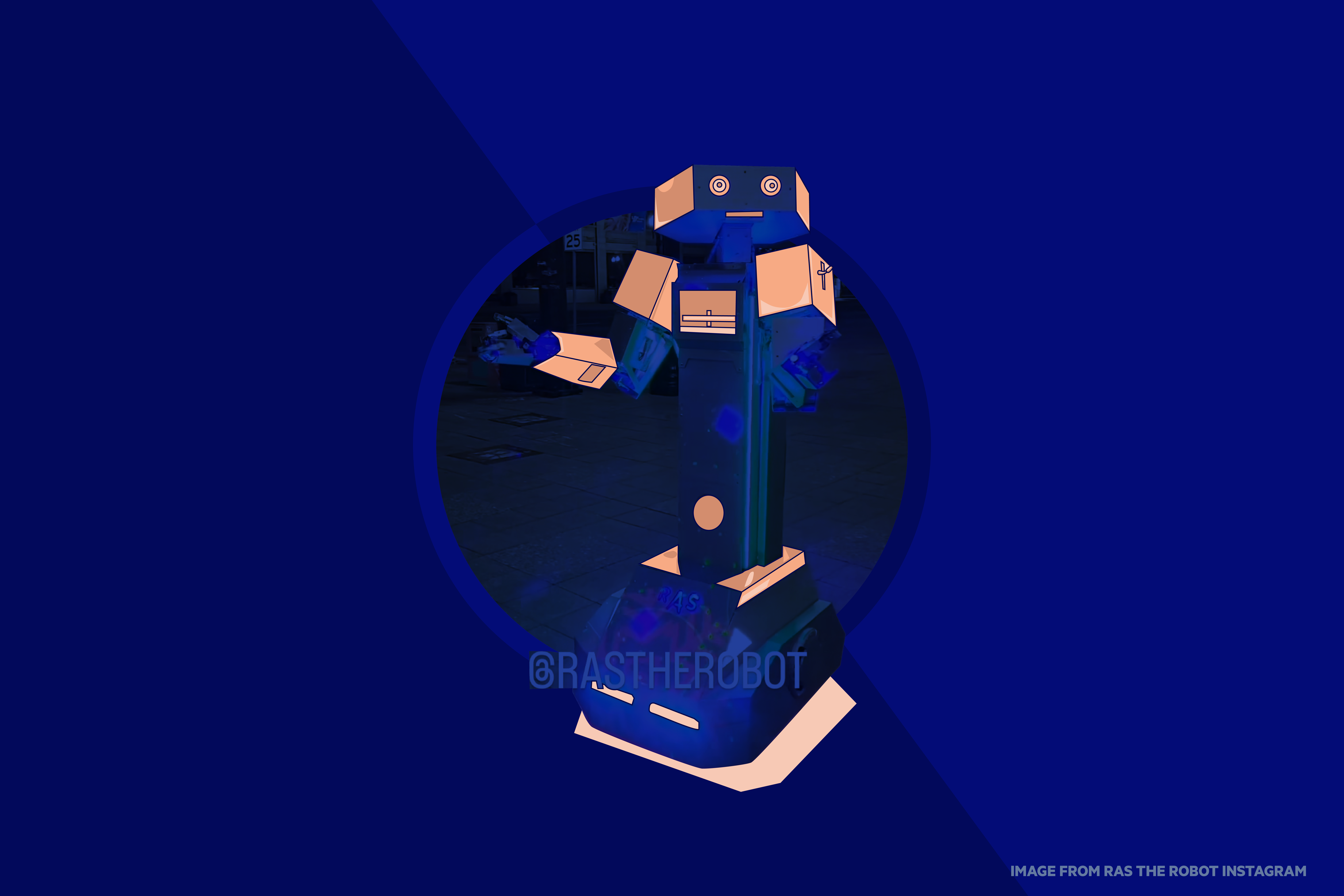 That’s the question Michael White, Salt Lake City local and robot enthusiast, has for engineers. “As humans, we’ve been very focused on robots to send to space, to automate production, and all of these other things,” he says. “But we forget that robots can be fun, too.”

“Fun” is the motivation behind Ras the Robot, White’s six-foot, three-hundred-pound singing, dancing, street-performing robot that you can spot in downtown Salt Lake City most nights.

That’s right: the robot is a street performer. Ras is animatronic, complete with a built-in sound system, lights, a fog machine, and a tablet on his chest to display advertisements.

“I’ve choreographed his head and arm movements,” White says. “And he’s on remote-controlled wheels, so I can put on any music, and he’ll dance to it.”

While Ras the Robot is as futuristic as they come, he has a long, storied past starting at White’s junior high.

“Ever since I was a kid, I’ve had a passion for designing,” White says. “But it wasn’t until my ninth-grade science project that I realized I could actually build something.”

He passed up the baking soda volcanoes and vegetable batteries for a mechanical hand—a fully functioning, humanoid appendage. “I did really well on that assignment,” White reminisces.

But his creative process became much more personal when White entered the foster care system.

“When I was 12, a family living in California adopted me,” he says. “When my sisters visited, we went to Disneyland. I remember just being captivated by the animatronics. I wanted to create things that brought people joy.”

Growing up in the 80s, White also spent considerable time watching all kinds of tech and futuristic movies. Throughout the years, one really stuck with him: “Short Circuit.”

“Ras the Robot was inspired by Johnny 5,” he says. “I didn’t want a robot with five fingers. I love that 3D design, the look of a classic robot. I wanted to create that same kind of feeling with Ras.”

This nostalgia would come into play decades later, but the commotion during his childhood caused him to halt all creative projects.

“I spent most of my school years doing just that: trying to get through school,” he says. “I didn’t do anything in that world again until my early twenties.”

Even then, Ras wasn’t in the works. When White reached young adulthood, he went back to familiar robot-building territory: hands.

“I would build a mechanical hand, take it apart, and build another,” he says.

Soon, he went back to school for a bachelor’s in robotics engineering while building and deconstructing in a loop.

“Once I graduated, I wanted to use my degree,” White says. “I started building out my portfolio. I realized it couldn’t all be mechanical hands.”

In 2013, nearly ten years after constructing his first hand, White threw caution to the wind and drew out a few forearms.

“I went step by step, mastering each body part,” he says. “With the forearms down, I started working on elbows. Eventually, I had a whole robotic arm. Once I had an arm, I was like, ‘Might as well build two arms.’ There wasn’t a plan. It was a lot of, ‘If we already have this, it wouldn’t hurt to build that.”

Slowly, in White’s garage, Ras finally started to take shape. White kept his head down, designing and redesigning, trying to problem-solve on a shoestring budget.

“I gathered most of my supplies from thrift stores,” he says. “The base of Ras was an old electric wheelchair; his frame is an old stand my neighbor gave me. I kept things simple and stayed patient.”

Despite spending every spare moment with the pieces that would make up Ras, at the end of the year, the reality of his finished robot knocked the wind out of him.

“It was all so unexpected,” he says. “I felt like he came out of nowhere. I’d wanted a robot since I was 12, right? And suddenly, here he is, from my mind.”

Immediately, White wanted to show Ras off. “The whole project had turned into something else,” he says. “He wasn’t something I wanted to hide in the garage—I felt like Ras needed to be shared.”

A few days after White wrapped up his first pass at a full-body robot design, he was rolling him out to the neighborhoods of California.

In the last few months, Rent-a-Bot hit new highs. White rented an office space at Kiln, started lecturing about robotics, and may soon be working at an after-school program alongside Ras. Today, he makes enough from street performing, gigs, and merch sales to support himself.

“My favorite spot was an intersection near our house,” he says. “Lots of cars would go by, and I’d stand there with Ras and show people what he could do.”

White knew he’d take personally whatever reaction the public had to the robot. Turns out, there was no need to be worried.

“I got the most beautiful reactions, better than what I could have hoped for,” White says. “People stopped in the middle of what they were doing to ask questions and learn more about him.”

Some folks would even go as far as to give White robotics advice—most of which he would later take to improve Ras.

“People would tell me to add this or that,” he says. “And most of the time, it was something I’d already been thinking about. It was often just confirmation for me that I was going in the right direction.”

“He’s become something of a community project,” White says. “That’s something a lot of engineers have trouble with. But the truth is, your creations are better when you make progress together. Too much secrecy doesn’t help you or your work.”

It’s just the opposite: word-of-mouth is really what got White off the ground. He’d passed out business cards while performing, and soon he started getting calls.

The demand gave White the confidence to turn Ras into a real business. In 2019, Rent-a-Bot, White’s LLC, launched. Although money started flowing in, it wasn’t all easy.

“‘I’ve been kicked out of a lot of places,” White laughs. “Especially Vegas—casinos really don’t like when you distract their potential patrons with a cool robot.”

Though Ras was picking up steam, a series of personal tragedies put White’s creativity on pause again. In January 2022, White reconfigured his minivan to transport Ras safely and moved his life to Utah.

“I came to Salt Lake to be with my sister,” he says. “We were both going through a lot of different emotions, and we wanted to take care of each other.”

A few months into trying to make himself at home, White had a realization. “I was at a very low point,” he says. “I decided that I had nothing to lose, so why not just go all out on Rent-a-Bot? I needed something to bring me joy.”

White designed Ras merch and hit downtown Salt Lake every evening. It turned out that people in Utah love Ras just as much—if not more—than Californians.

“Salt Lake is fantastic,” he says. “On top of the super positive reception to Ras, the incentives for running a small business are incredible. There’s just nowhere like Utah.”

In the last few months, Rent-a-Bot hit new highs. White rented an office space at Kiln, started lecturing about robotics, and may soon be working at an after-school program alongside Ras. Today, he makes enough from street performing, gigs, and merch sales to support himself.

But that’s just the start of his plans.

“I want multiple robots in multiple states and to get to the point where it’s not just me doing all of the grunt work,” White says.

He pauses to recalibrate.

“It’s actually not ‘grunt work’ at all,” he says. “I’m having the time of my life living my passion every single day. I think what I really want is to have more people doing it alongside me.”

A second robot would take only three months to build, he says, compared to the year of work that went into Ras’ initial iteration. But for now, White has put the brakes on that expansion to continue tweaking his current design.

His first order of business will be a new sensory system—something akin to a Roomba, White says.

“Sometimes Ras loses himself in a dance and gets a little too close to a curb,” he says. “I’d like to avoid those scrapes.”

But even without those upgrades and nearly two decades into the process, White says Ras is still one-of-a-kind.

“I’ve met tourists in downtown Salt Lake from France, Japan, and Canada,” he says. “Every time, they say they’ve seen nothing like him. It amazes me.”

While Ras is a fascinating technological achievement to passersby, to White, he’s a friend, too.

“Ras has helped me in so many ways,” he says. “It’s funny because I didn’t plan on him at all. I just started making what I wanted to see, and he became one of the best parts of my life.”

Despite all the ups and downs, White only regrets one thing: not starting sooner.

“That’s my message to anyone with a big dream: follow it,” he says. “It doesn’t matter if it might not make sense right now or you’re not sure how you’ll get there. Things tend to work out.”