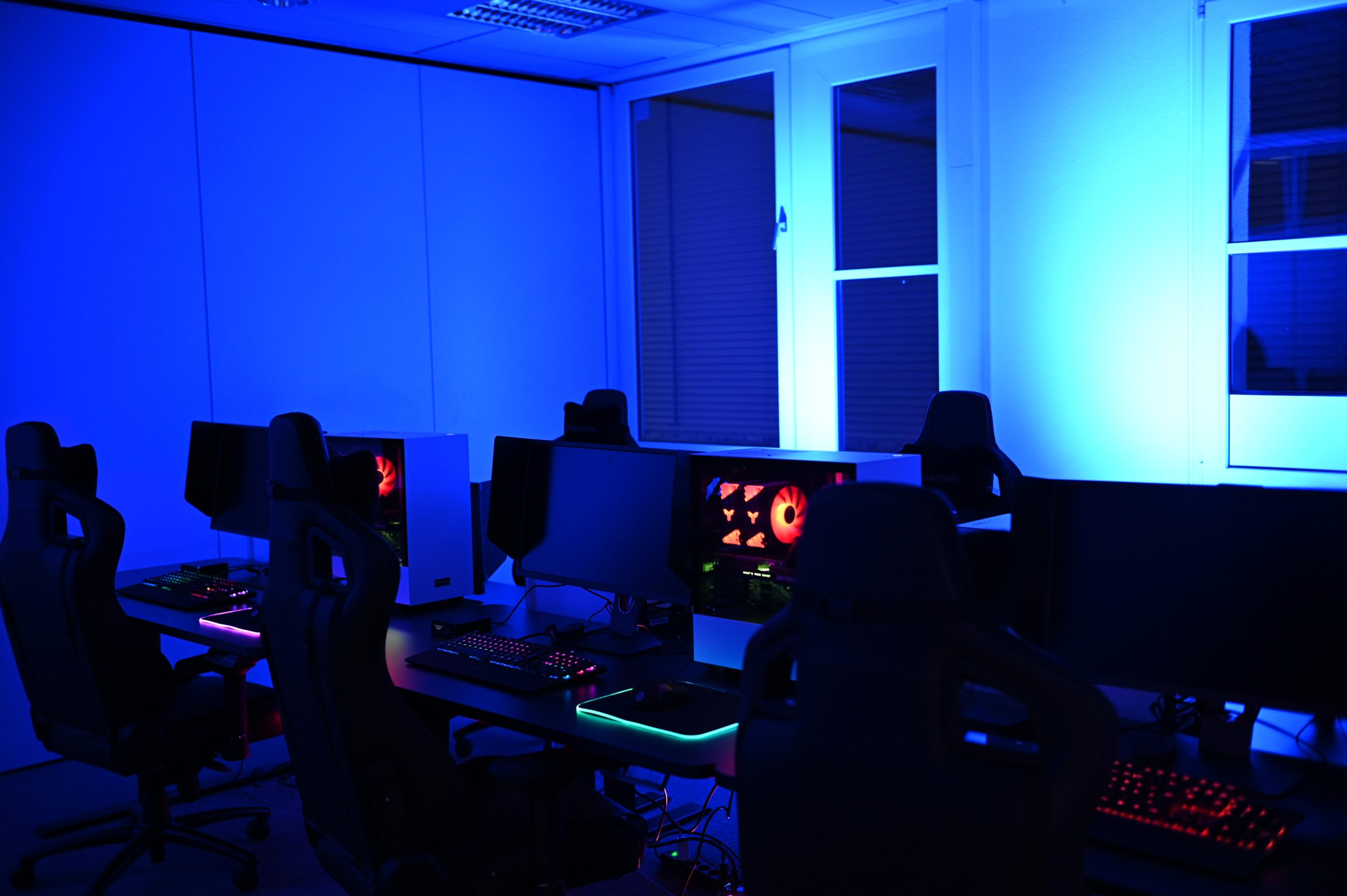 Growing up in Brooklyn, Jelani “Comp” Mitchell regularly shook off complaints from the adults around him about the hours he spent playing video games during his free time. Most people thought it was a waste of time.

But now, 28-year-old Mitchell proves them wrong on a daily basis: He’s head coach of Utah Jazz Gaming, a Salt Lake City professional eSports team affiliated with the NBA—stellar proof that video gaming is not a waste of time. “People are seeing that you can make a livelihood from this,” he says.

That’s a bit of an understatement. While organized competitive gaming has existed for decades, it’s burgeoning into a full-fledged industry. The video game market alone was worth more than $90 billion in 2020, and Mitchell’s world of professional video gaming—or eSports—has literally exploded to become a $1.08 billion market, up 50 percent in just the last year. Twitch, Amazon’s eSports streaming channel, logged a staggering 17 billion hours worth of content last year, an 83 percent jump over 2019. In 2020, eSports companies raised more than $2 billion from investors, up 115 percent from 2019, according to Quantum Tech Partners.

Esports has never been hotter. Credit better technology, streaming capabilities, increased popularity—and the pandemic. Even before Covid, industry analysts projected 2020 to be a huge year in anticipation of new Playstation and Xbox consoles that boasted dramatically better graphics processing and motion control. But at the start of global lockdown in March 2020, consumer spending on games surged, surpassing $10 billion that month, as people searched for more Covid-friendly entertainment.

During the pandemic, the NBA 2K League, which includes the Jazz and 22 other teams, wasn’t able to hold its professional video game competitions with in-studio audiences or in stadiums as it had in the past. But it didn’t squash its audience: As many as 475 million people from around the globe tuned in for the league games on Youtube and Twitch—complete with broadcast production, commentators, and analysis. ESPN2 also aired games in lieu of in-person professional NBA team games. The Utah Jazz Gaming team’s online viewership alone grew 69 percent last year.

That’s created some froth among NBA 2K League advertisers, which include Nike, AT&T, Snickers, Wilson, Snickers, and Gatorade. Esports has commanded the attention of Spotify and venture capitalists and spawned platforms with recent hot IPOs and acquisitions. Several colleges and universities, including Ohio State and George Mason, now even offer undergraduate degree programs in eSports. In addition to the Utah Jazz Gaming team, the University of Utah boasts an eSports team, and a number of high schools recently created new varsity eSports teams.

The state is home to a dozen of fast-growing video game makers, including a branch of stalwart Epic Games. It’s also home to a new generation of mom-and-pop gaming centers that offer a taste of the fun with hourly rentals of virtual reality gaming and equipment and rows of PCs with the newest multiplayer games. The lockdown shut down those operations for a few months, but as things open back up,  people are flocking to these brick-and-mortar gaming centers.

“When we tried these games, we thought, ‘this is too fun,’” says Preston Smith, manager of Lowes Xtreme Air Sports, a trampoline park in Provo. So the Lowes Xtreme team acquired Virtual Experience, a Provo virtual reality, and multiplayer gaming arcade. “I like shooting zombies. It’s like you’re living out your childhood dreams,” says Smith. “People love it.”

It’s a similar story at Gamer Planet, a six-year-old VR and multiplayer video game center in Sandy, Utah. This year has been its fastest-growing year yet. “There’s a huge demand,” says store manager Dilan Rees.

It helps that Utah skews young in its population—a median of 30 years old, younger than any other state in the nation—and it’s home to a vibrant $18.5 billion tech industry, which accounts for one in every job in the state. “There are a lot of people who play after a long day at work,” says Jonathan Rinehart, managing director of Jazz Gaming. And watching Jazz Gaming basketball online is “just like watching traditional basketball.”

In the professional NBA 2K League, each team member controls their own avatar for a 20-minute game, sitting together as a team, communicating with one another via microphone. They run traditional basketball plays like pick-and-roll, boxing out, fast-breaks, and zone defense, virtually.

Jazz Gaming’s six team members draw a base salary of $38,000—small in comparison to the $1-$34 million commanded by Utah Jazz basketball players. Still, they can play back-to-back 20-minute games with no breathless wind sprints. All told, a season comprises 28 games and a handful of tournaments, which, if they win, lets them grab a piece of the league’s $1.7 million in prize money.

It’s also comradery. The Jazz, owned by Smith Entertainment—a new venture owned by Utah tech billionaire Ryan Smith—drafted its team of six from New York, Houston, Seattle, Milwaukee, and Connecticut through Y2 tournaments. All of them are in their early twenties, including a pair of twins, and live together in a league-sponsored Salt Lake City apartment complex during the season, which runs from March to September. Needless to say, they spend a lot of time living and breathing gaming—especially during the pandemic.

“We’re a tight-knit group,” says Mitchell. “We just go in and try to get better every day.”

That coaching philosophy is working. Mitchell was named 2020 NBA 2K League Coach of the Year. In his second season, he led his team to a 14-2 regular-season record, the best in franchise history, and earned the No. 2 seed in the playoffs. This year, the team is preparing for an upcoming tournament and the chance to win a $117,000 winning pot. It will involve critical thinking, fast reflexes, strategy, and comradery, says Mitchell. He no longer plays video games himself, but he turned his experience into a valued skill.

“My job is really coaching to the core,” Wilson says. “We want to ensure we can peak at just the right moment.” Until then, they’ll just get paid to ride the eSports wave.