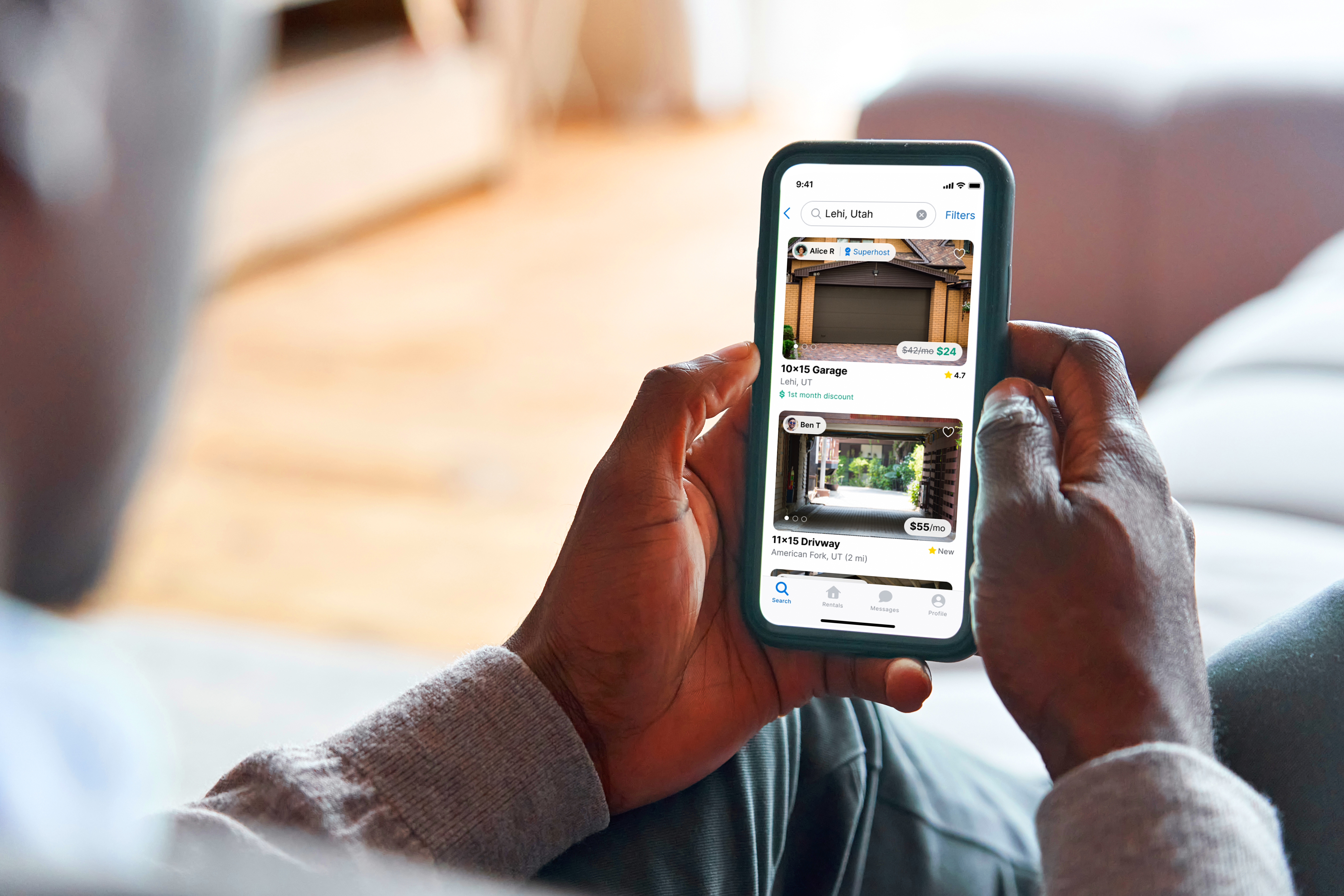 The last thing Preston Alder, my co-founder at Neighbor, had on his mind in the Spring of 2016 was starting a company. He was newly married and he and his wife were planning on moving to South America to volunteer for a global humanitarian organization. Because they were moving out of the country, Preston’s most urgent matter was finding a storage unit for their combined items.

He began searching online for local storage units, just as millions of Americans do each year, and he quickly found that each facility nearby was completely full. After he finally found one with a vacancy, an inconvenient two cities away, he realized he would need to pay hundreds of dollars a month just to store their items.

In an effort to solve his own problem, he turned to his connections and found a longtime family friend who was willing to let Preston use his garage as storage. He quickly moved his items in and boarded a plane soon after. Several months later, Preston and his wife returned to the United States ready to move into their first apartment and after picking up their belongings from their neighbor’s garage, Preston had the thought: “Why doesn’t everyone do this?”

All summer while in South America, he had such peace of mind knowing his items were in a neighborhood, and a house, that he trusted. Not only that, but he had saved a lot of money. It was such a better experience than leasing a storage unit. This was when an idea started to formulate and he reasoned, “There’s got to be a garage or some sort of vacant space in every neighborhood in the country. Why isn’t there a nationwide directory or marketplace for available spaces?” And Neighbor.com was born.

From friends to co-founders

The first person Preston shared the idea with was his best friend Colton. Preston and Colton first met in the Chaco of Paraguay while serving a humanitarian mission for their church. They had since returned to Paraguay together to work for a social impact firm helping Paraguayans start small businesses. Later, they joined Sorenson Global Impact Investing Center to identify the companies doing the most good in the world.

When Preston shared his idea, Colton was just a few months away from graduating from the University of Utah and was preparing to start full-time at a data consulting firm, Cicero Group. Colton, like Preston, had no plans to start a company, but he loved the idea and thought, “Why not take the $40 billion paid to large self-storage corporations each year and distribute it to local homeowners where it will do more good?”

The same summer Preston had been in Peru, I had been working for Bain & Company, consulting a $7 billion global engineering firm. Bain was my dream job, and when they gave me a full-time offer to return the following year, my wife and I accepted on the spot. We were a month away from the birth of our first child, and I was excited to return to BYU for my senior year before embarking on my life adventure with a new family.

I ran into Preston my first week back at school—he and I had been good friends and classmates at BYU, often taking classes together and even competing in case competitions with each other. Preston’s wife had also accepted a job at Bain & Company, so we were always running into each other.

I had no reason to believe that running into Preston that first week would change my life. Thankfully it did. Preston pitched me the idea for Neighbor, and I was hooked. I vividly remember walking into my apartment that night and exclaiming to my wife, “Preston had the best idea I’ve ever heard in my entire life. This is amazing, and I want to be a part of it.”

In the early days of Neighbor, we’d spend nearly every waking hour building out our ideas. When it came to finding a workspace, Preston and I would often huddle for hours on the floor of a dead-end hallway in the Marriott School at BYU while entertaining my 6-month-old daughter in between classes. Every so often maintenance would stumble upon us. Meanwhile, Colton, who was already working full-time, would work nights until 3-4 AM and weekends.

We acquired our first hosts by knocking on doors in neighborhoods across the Wasatch Front, trying every tactic from flyers to Vivint-style pitches. In an effort to keep people from throwing our flyers in the trash, we withdrew $1,000 in $1.00 bills from Neighbor’s bank account and paperclipped a $1.00 bill to each flyer. The flyer read, “This is the first dollar you’ll make by renting out your space on Neighbor.”

We also started entering business competitions, winning some of them and losing more. One of the first major competitions we won was the Miller New Venture Challenge in March 2017. The award included $15,000 and a small office in the N. Eldon Tanner building at BYU. We spent that money real quick―none of it on our salaries and all of it to testing local ad spend. As for the office, it was a tiny room that barely fit four people.

All in all, the most important things we received out of that experience were the advice from several very generous former founders, the reassurance we were moving in the right direction, and the exposure to several local venture capital firms.

I remember when I first shared with Preston and Colton that I thought we had what it took to raise a $3 million seed round. Their mouths both opened wide and they asked, “Really?” It was kind of a shock because our initial idea was to raise $40,000 and $3 million was an absolutely unfathomable amount at the time.

Especially because we’d all heard stories of founders going through the grueling process of pitching hundreds of investors without success for the seed round. But we were pretty fortunate when it came to venture capital, and I say that because our first investors reached out to us, instead of the other way around. Looking back, we owe our thanks to the business competitions we entered because those prompted the investment interest.

Of the VCs who had reached out, three partners quickly caught our eye: John Mayfield at Album Ventures and Ben Lambert & Chad Packard at Pelion Ventures. They understood the marketplace potential better than others and treated us three green college students with an undue amount of respect. Chad & Ben had even developed a thesis around storage and had been searching for a storage marketplace.

Because of these things, we chose Pelion and Album to lead our $2.7 million seed round, falling just short of the $3 million goal. Both firms took us under their wing, with Pelion first incubating us in their office space and then Album doing the same until we had 12+ employees. John even went out of his way to personally recruit several of our first hires.

Creating more than the future of storage

Now some five years after we started, we lead the largest self-storage marketplace, operating in more geographies than any other storage provider in the world. We went on to raise a $10 million Series A in 2020, which was the first time Andreesen Horowitz has ever led a Utah funding round, and storied marketplace investor Jeff Jordan joined our board. We also raised a $53 million Series B in 2021 led by proptech-titan, Fifth Wall Partners. But these accolades aren’t why we’re building this business.

My hope moving forward is that Neighbor can continue to be the marketplace that brings communities together and empowers people to make life-enabling passive income. We decided to call the company Neighbor from the very beginning because we like to think of ourselves as a way to connect people who live very close to each other in a mutually beneficial way. In a way, we feel that this local connection will be our most enduring legacy as a marketplace.

Airbnb connects you with someone in an entirely new city or country. When you visit that person’s property, you develop a relationship for that stay. Once you leave, you likely never communicate with that Airbnb host again. Uber is similar: you may talk to the driver, but certainly not after you exit the car. It’s different with Neighbor. Since people choose storage units that are very close to each other and they usually commit to long-term deals, they are connected with that individual for just as long.

We want to be the marketplace that connects “Neighbors” together in communities across the globe. Neighbors can provide so much more for each other than just storage. And so many societal problems can be tackled if we simply get to know our neighbors better and care about them more.

We have hosts and renters telling us they barely said “hi” to each other before and now because of Neighbor they regularly have conversations with each other and care about each other. We’ve even had a host and renter start dating. Once you learn about your neighbors you realize that they’re not much different than you and start to care for them. When we start to care about our neighbors and we are willing to serve them in any capacity, we become invested in their lives and start to improve our neighborhoods. I can’t wait to see where Neighbor goes next. 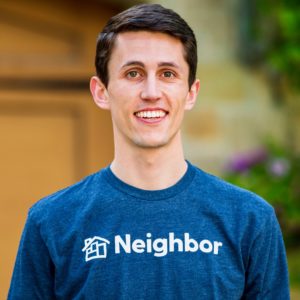 Joseph Woodbury is the co-founder and CEO of Neighbor.com