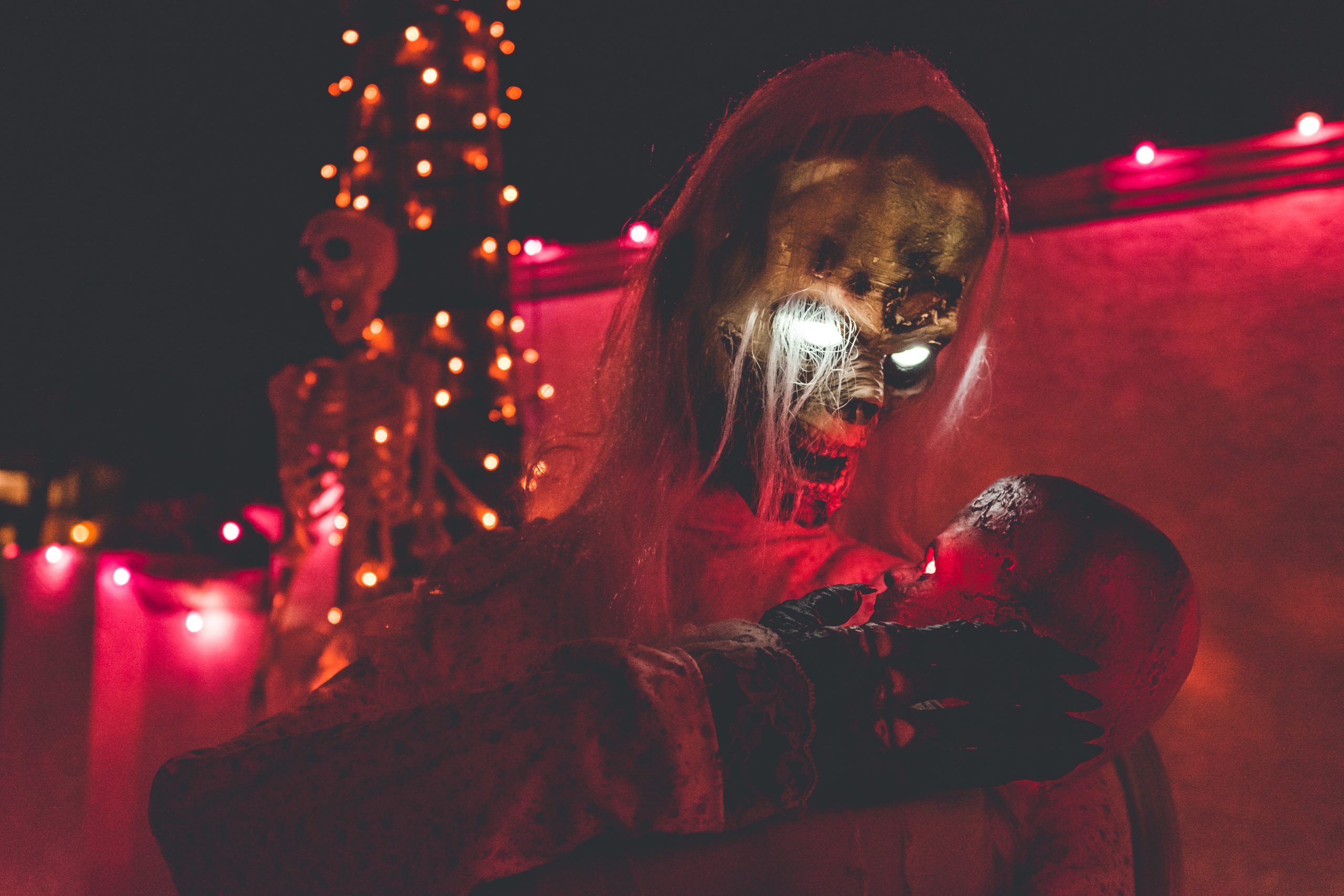 I‘ve always loved Halloween, but my love for all things spooky really sunk in when my family moved out to East Millcreek sometime in the 1950s. As we settled into our new house, we soon met an older lady who came to our door dressed to the nines every Halloween. Her dedication was seriously unbelievable and she always came dressed in the strangest, scariest, most-horrible looking costumes I’d ever seen.

For the longest time, we didn’t know who this lady really was, until one day when our neighbor across the street broke down and confessed that it had been her the whole time. I absolutely loved it―I couldn’t believe this woman had created such a thrilling ruse sure to spook us every holiday―and it was something that stuck with me forever.

While Halloween was always my favorite holiday, my career in the industry first started as a hobby when I was 22 and made leader of my church’s young men’s program. One of my first tasks was to oversee the Halloween party and I immediately suggested that we create our own haunted house―I wanted to give someone else the same experience I’d had with my neighbor as a child.

The idea was well received so I secured an old world war radio and arms plant for the haunt and set to work creating a story, designing a set, etc. Despite the fact that it was my first “official” haunted house, it ended up being an incredible success. In fact, it was so successful that the members of the young men’s group begged me to hold the attraction open another night for all of their classmates. I relented and somehow we pulled it together for one more night, charging .45 a person for admission.

I had so much fun putting that first haunted house together that I put together a few more haunted houses for the young men’s program over the next few years at the Smith’s farmhouse in Murray, The Old Mill, and more while working as a founder/interior designer for my company, Custom Interior Design Gallery, during the day. I didn’t realize it at the time, but it’s amazing how much of my interior design expertise is needed to create these haunted houses.

I probably would have been content building haunts for my church every Halloween but one year, they changed the rules around wearing masks due to safety reasons. Due to these new rules, my envisioned haunt wasn’t possible and I decided to step back from the project. I was bummed at the time but it ended up working out for the best when Bruce Hanks, the president of the Salt Lake March of Dimes, contacted me to be the chairman of the March of Dimes Haunted Houses the following year.

I worked with the March of Dimes as a side project for the next few years until 1988 when I began to rethink things due to the sheer time commitment involved. Instead of it taking only a few weeks to pull off these haunted houses every year, I was soon putting in months of work at a time and recruiting my family members to help me. Each year we continued it seemed like we were putting in more work to make the haunts more unique and elaborate.

By this point, I knew that I was seriously burnt out on haunting so I decided to retire from the March of Dimes before the Halloween of ‘88 and spent that fall remodeling a tiny cabin in the woods. It was a much-needed change of pace compared to what I had been doing every fall prior but I had a feeling that I’d soon find my way back into the industry.

Building a career on scares

And I was right. Sometime in 2008 my son-in-law, Keith started calling and inviting me out to explore local haunted houses. This was during the housing crisis and the interior design business was slow, so we had a lot of free time. What started off as a single trip to a haunted house quickly spiraled into dozens―it was almost as if I had forgotten the magic of being scared (and scaring people!) and I missed it.

After a few months of exploring local haunted houses, Keith and I thought it would be fun to open up our own haunted house with the help of my son Rob and his wife, Heidi and Keith’s wife, Cindy. We were inspired to take the plunge because we missed haunting, of course, but we really wanted to do something that could supplement our incomes and we wanted to do it with our family. Fortunately, it wasn’t a hard sell to get them involved, though at the time we all planned on keeping our day jobs to better fund the project.

Immediately after we all signed on to the idea, we set to work finding a location for our new haunted house, but this proved to be our first real challenge. The Old Mill I’d used for an attraction years prior was still there, but it was too costly ($10 million!) to bring it up to current zoning regulations. We began shopping around for properties and Rob came across the Portland Cement Company along I-15. It reminded us of The Old Mill in all the best of ways―from the grandiose nature of the structure itself to the winding underground tunnels―so we immediately bought it and started building what everyone now knows as the Fear Factory.

From the moment Keith approached me about the project and we started building, it’s been nothing but a complete team effort―we all dove in 100 percent (quite literally―we self-funded the entire thing!), and that’s probably been one of the most rewarding things for me. In the beginning, it wasn’t uncommon to see my kids in costume working the haunted house or helping at the concessions stand. For a while, Heidi and Rob were each holding a kid on their hip while also helping our staff put makeup on.

As we planned the first year of Fear Factory, our intention was that it would be a fun, scary, but small haunt. It quickly turned into a fan favorite and we were a little under-prepared for the incredible response. As a result, we were left scrambling to adjust to the demand of fans. It was a good problem to have, but in all honesty, we weren’t expecting it at all. After that first year, it really sunk in that this haunted house thing could be an actual career instead of just a hobby project for my family every Halloween.

We’ve grown a lot since that first year―going from a small cast of about 30 people to a full staff of more than 300 people consisting of actors, ticketing agents, makeup artists, security detail, photographers, bus drivers, and operations, as well as dozens of others who work behind the scenes to pull it off. We’re even profitable enough now to remodel about 70 percent of our building each year, something we dreamed of but seemed too big to handle when we first started.

Ten years of haunts (and plenty more to come)

Of course, this kind of sustained growth in the entertainment industry hasn’t always come easy. When Covid hit, we knew that we either had to pivot and figure out how to open in the midst of it all or die. So we created a 60-page Covid plan implementing social distancing, ticketing transformations, and changing the way we ran our makeup department, among other things.

At the time, such a plan in the haunted house industry was completely unheard of and we completely reinvented the wheel. When we presented the plan to the health department in order to open after lockdown, it was a complete success. They approved our plan with ease and we were able to open up in May 2020. We were the first haunted house in the country to do so, and we were the first to prove that we could do so safely. It was an incredibly rewarding moment for our team.

This year is our 10-year anniversary at Fear Factory. Things have really changed over the years and that’s what makes it fun for us. We consistently lead the industry in innovation and are recognized every year by media and industry associations as one of the best and scariest haunts in the country.

One of the keys to our success in building such a loyal team has been providing them with opportunities for growth and rewarding them for their dedication. This year, for example, we’re taking our entire leadership team on a cruise. A few years ago we created an incentive program to reward team members that work all their shifts. This allows them to make their regular wage plus a generous bonus for their commitment to excellence.

We’re always on the lookout for new and innovative ways to have fun and entertain our fans. Moving forward we’ve talked about expanding into other markets and even adding other events at Fear Factory throughout the year.

Growing up I heard people say, “choose a career that you like so it’s like you never work a day in your life.” I think I took them a little too seriously. My family and I chose haunted houses and Halloween―two things that we love so we never work, we just play all the time. 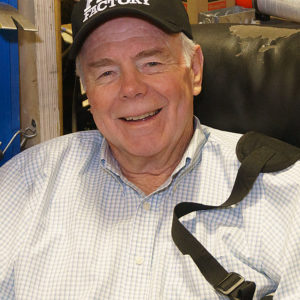 Bob Dunfield is the founder of Fear Factory.