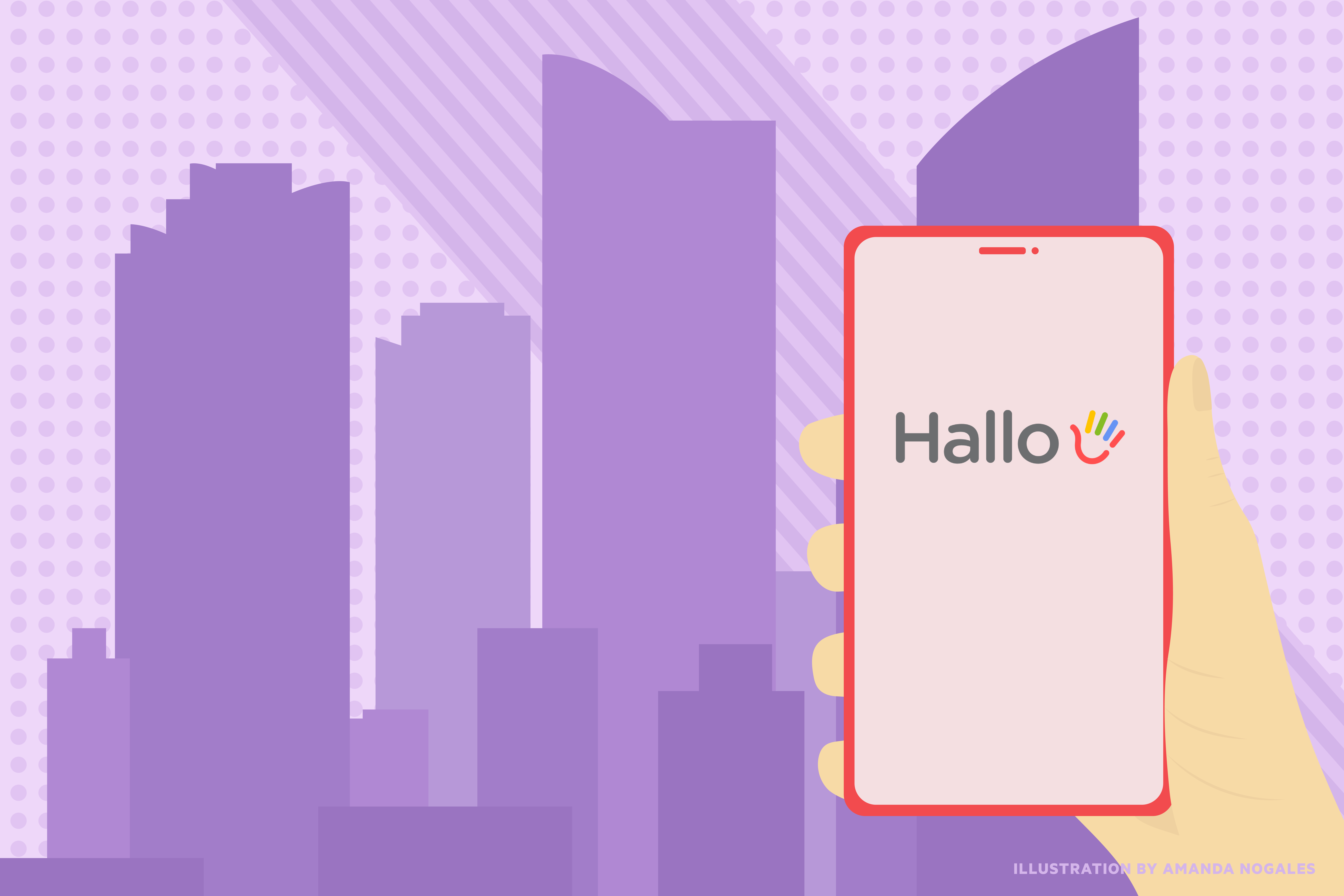 Hallo moved its team to Korea to expand their market

Hallo is turning a crowded market of language-learning programs on its head with a centralized approach to teaching English. And now, with over $1.4 million in funding raised, co-founder Joon Beh has taken the English-teaching platform to Korea on their government’s dime.

“I know the country and I speak the language, but they’re the ones that reached out to us,” Beh says. “Government officials sent us an email after seeing our growth and invited us to apply to the K-Startup, a program funded by the government to help establish new businesses in the country.”

Hallo was one of 60 applicants accepted––and only one of two US-based startups. The program required the team to pack their bags and live in the city for the next four months, testing their ideas with the Korean public and getting feedback from possible users.

Beh says that English learners in Korea still spend most of their time in textbooks, and often lack the communities necessary to learn through speaking, making them a perfect starting market for Hallo.

“In Korea, people spend, on average, $300 per month learning English already,” Beh says. “If you want to get a job, apply to a school, you have to show a score on your English proficiency, so, rich or poor, learning the language is a priority for Koreans.”

The Hallo team relocated at the end of August and has already translated their website, mobile, and web app into Korean, developing a PR kit and connecting with other Korean companies and universities.

“Our goal while here is to make sure what we offer is what the Korean audience wants,” Beh says. “Korean students are very different from other English learners––they’re shy and often have a fear of being judged while speaking English, and they’re very sophisticated. They’d rather pay more to access quality lessons.”

Many of Hallo’s current customers are in South Asia, while most of their teachers are based in the US. While private lessons have been well received, Beh says blending their existing audience with Korean users when it comes to group lessons has proven difficult.

“We’re spending a lot of time trying to strike a balance between pricing and quality,” Beh says. “Our South Asian audience is looking for a scooter, for example, and the Korean audience wants a Mercedes Benz. We don’t want to outprice our current users, but we don’t want the Korean market to think we’re not high quality.”

If Hallo can strike the right chords in Korea, Beh says they’ll be set to expand rapidly throughout Asia.

“Korea is well respected by other Asian countries,” Beh says. “Everyone loves K-Pop, Korean tech companies like Samsung, LG. Once we settle the Korean market, other countries, especially India, which is where we’re looking to next, will be quick to follow suit.”

Despite early struggles, Hallo is already attracting and maintaining big-name investors––like the owners of Lucid and Podium––and high revenue numbers. “We were generating five digits a month before moving to Korea,” Beh says. “The goal after leaving the country is to get to six a month, where we’re growing by 25 to 30 percent each quarter.”

Beh plans to get there by running focus groups with Korean users to better understand what they want out of group lessons, making payment processes easier with foreign currency, and increasing the number of paying customers.

Hallo has garnered financial and business support from Rev Road, Kickstart, and Silicon Slopes, and Beh says that help won’t go unnoticed. “We’re planning on being headquartered in Utah for the long haul,” he says. “Everyone speaks multiple languages here, and when we eventually expand out of English-teaching, that’s going to be necessary. We owe a lot of our success to the support we’ve received from the state, and from the community that’s established here.”

When their plane touches ground back in the US, Beh says his team plans to launch their Series A. He’s hoping to raise between $8 and 12 million during his first round. “We’re the only company in this market approaching language learning from this angle,” Beh says. “Democratized learning is in high demand, and we’re ready to meet it.”

Beh was born in Korea but moved to the United States with his family in his teens. “I was in the top one percent of my class before I moved to America, but because of the language barrier I had to study twice as hard,” Beh says. “I know what it’s like to not only want to learn English but have to in order to succeed.”

After graduating from Brigham Young University, Beh moved to California for a job with a consulting firm. He worked one-on-one with large tech companies in the area, learning about their weaknesses and helping to solve efficiency issues. It was in a meeting with the early stages of Uber in 2017 that the concept for Hallo clicked into place.

“We want to be the Uber for language learning,” Beh says. “You can click on a button and start talking to a native speaker, join a class. It’s learning on-demand, but at the convenience of the providers, too.”

In the earliest days of Hallo, plenty of other language-learning applications existed––Duolingo, Babbel, and Rosetta Stone, for example, were gaining new users every day, and are still lauded as ed-tech giants in the industry today. These applications often use a course model, where users work through themed lessons focused on vocabulary and sentence structure, earning funding through paid subscriptions.

Those applications and their hundred or so competitors are missing something, though: the opportunity to practice out loud. That’s why Hallo uses a teacher-student model with live lessons in both private and group settings. The user interface is like a college course, where students are given assignments throughout the week, attend lessons, and work one-on-one with instructors. Their revenue comes from a 25 percent commission from what teachers on the platform earn from classes.

“The best way to learn a language is by speaking it,” Beh says. “When I first moved, I could read and write in English but struggled with talking to native speakers. On these other apps, you can learn grammar, pick up some new vocabulary, but you can’t become fluent.”

Just four years after the idea of Hallo took root, Beh says the online platform has over a million users, with 13,000 plus students signing up for their classes each week. “Everything is about speaking, which lends itself perfectly to community-building,” Beh says. “That’s what really sets us apart from every other company in our market––we’re a place where you can not only learn a language but make friends, too. We’re as much a social media platform as we are an educational platform, and that’s really attractive to our users.”

Beh says he took a risk by both rejecting the traditional teaching model and focusing primarily on English teaching, but that it’s paid off in more ways than one.

“Some of our investors wanted us to spend more time generating revenue, but we’re playing the long game,” Beh says. “We’re establishing a foundation of learners and teachers, connecting people, building relationships that will pay off down the road and make us nearly impossible to compete with.”