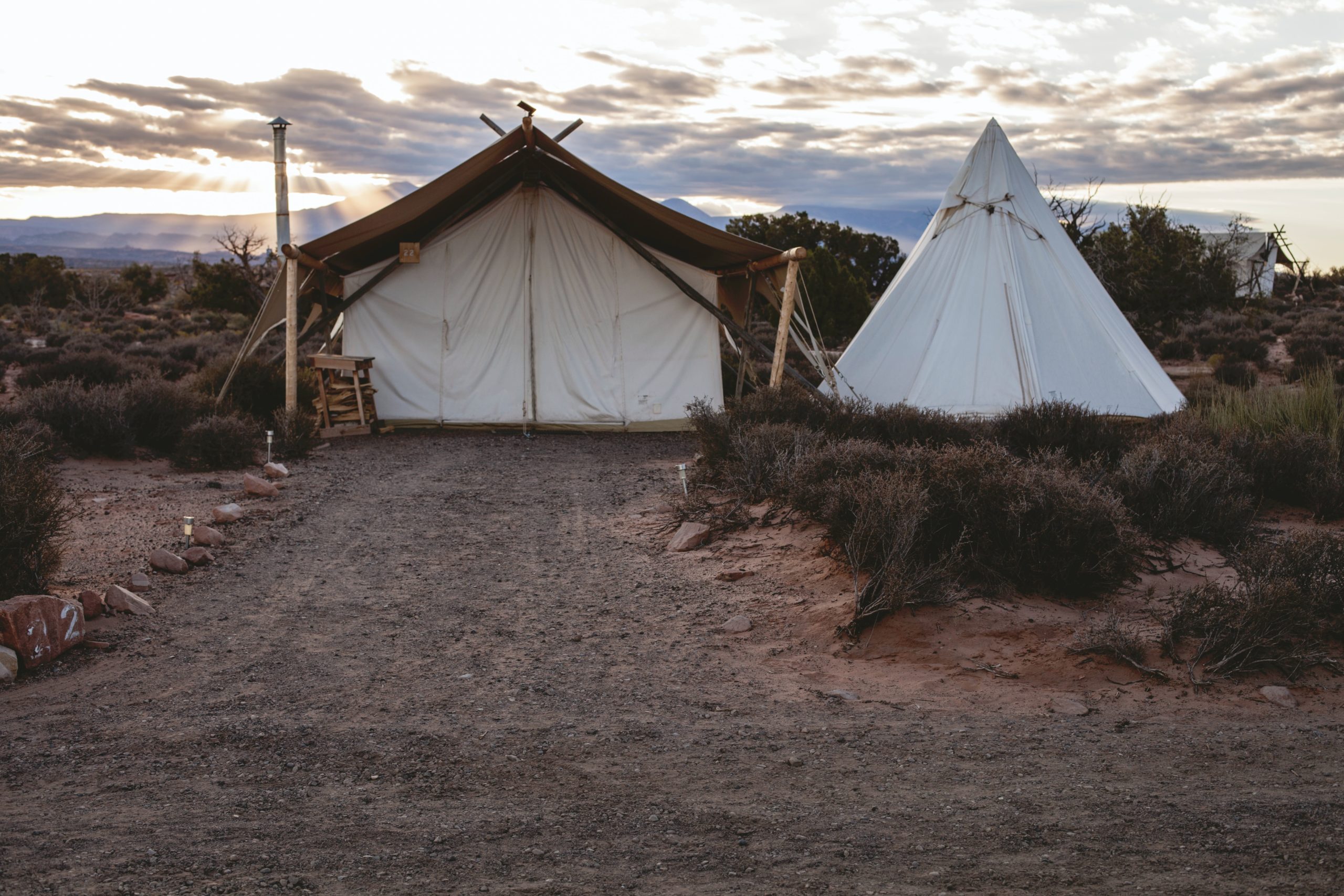 Glamping sites are popping up all over Utah

In 2020, the worldwide glamping market was valued at $1.88 billion. That market is growing at an expected rate of 14.1 percent each year. Glamorous camping—aka glamping—has existed for centuries, from 6th-century Mongolian yurts to the 16th-century luxurious accommodations enjoyed by Scottish royalty. It’s only in recent years, however, that the glamping industry has taken off in Utah.

Numerous glamping sites have recently opened near Utah’s renowned national parks, and more are on the way. This past March, Open Sky opened its luxury tents to campers in the Zion area, charging visitors between $300 and $700 per night. AutoCamp, an airstream motel service, hopes to add to the Zion glamping scene in 2022 with slightly more affordable options that max around $300 per night.

Under Canvas, which already has locations near Lake Powell and Zion, has plans to expand its Utah presence with sites near Moab and Bryce Canyon. And for the most glamorous of glampers, Camp Sarika offers luxury desert suites for $3,000 per night on the low end and upwards of $12,000 per night on the high end. Glamping is nature at its most luxurious.

The challenges of the glamping boom

While glamping is growing in popularity, the reviews are polarizing. The Under Canvas site proposed near Moab has sparked controversy and a petition protesting the proposal. The petition states, “We demand that Under Canvas and SITLA pull out of their lease agreement at Looking Glass Rock area, and stop all plans of developing the area, keeping it in its natural state for all to continue to enjoy for generations to come.”

The petition has gained over 2,700 signatures protesting the proposed site, which will include 75 tents complete with individual bathrooms, heating, and a central restaurant and lobby area.

One comment from Cindy Kamp, a signer of the petition and a Utah resident, states, “I live by Zion National Park, and glamping development is starkly changing the natural landscape. We’re seeing more and more and more.”

Bygnal Dutson, the founder of Open Sky, commented on the need for sustainable practices in the glamping industry. “Each of us has the responsibility to be good stewards. When vising nature, you have to do things the right way,” he says. “For us, that means not going in with cheap systems and not cutting corners when it comes to sanitation, sewage, and other sustainability measures.”

Unhindered by the controversy, the market for glamping is gathering more fans every day. Glamping has inspired thousands of people to experience nature, including some who might have never previously considered it. According to the 2021 KOA North American Camping Report, 2020 saw a larger increase in first-time campers than ever before. Roughly one-fifth of campers in 2020 were camping for the very first time, which amounted to 10.1 million new visitors to the great outdoors—a number five times greater than the number of first-time campers the previous year. Nearly half of all first-time campers in 2020 had their first camping experience in glamping-style accommodations.

“My market—they’re not campers to begin with, but they want to enjoy nature, and they want to feel safe at night,” Dutson says of the patrons visiting Open Sky. “With options for more comfortable accommodations, the type of people interested in seeing nature is transitioning quite a bit.”

While camping has historically been dominated by white individuals and families, a full 60 percent of first-time campers in 2020 were non-white families. Among those first-time campers, two-thirds reported that they had stayed at campgrounds with enhanced amenities like running water, electric hookups, and Wi-Fi or cell service. Black campers also reported the highest interest in cabins and other non-traditional accommodations during camping, suggesting that the diversity of accommodation options is directly related to the increase in interest from non-white individuals.

As glamping drives tourists to Utah’s famous national parks, Utah’s economy is sure to benefit. “Travel and tourism is one of Utah’s top ten industries, supporting one in 11 Utah jobs and generating over a billion dollars in state and local tax revenue annually,” reads the Gardner Institute’s research on Utah’s travel industry. In Grand County—which is home to Arches and Canyonlands national parks—visitor spending supports 2,296 travel and tourism jobs. With a population of just under 10,000 people, this means that nearly one in four jobs is tied to travel and tourism.
In response to the complaints of over-crowding due to an increase in tourism in Grand County, Moab Mayor Emily Niehaus says it’s a good problem to have, especially while recovering from a pandemic. “It’s a good problem, but it’s still a problem,” she says.