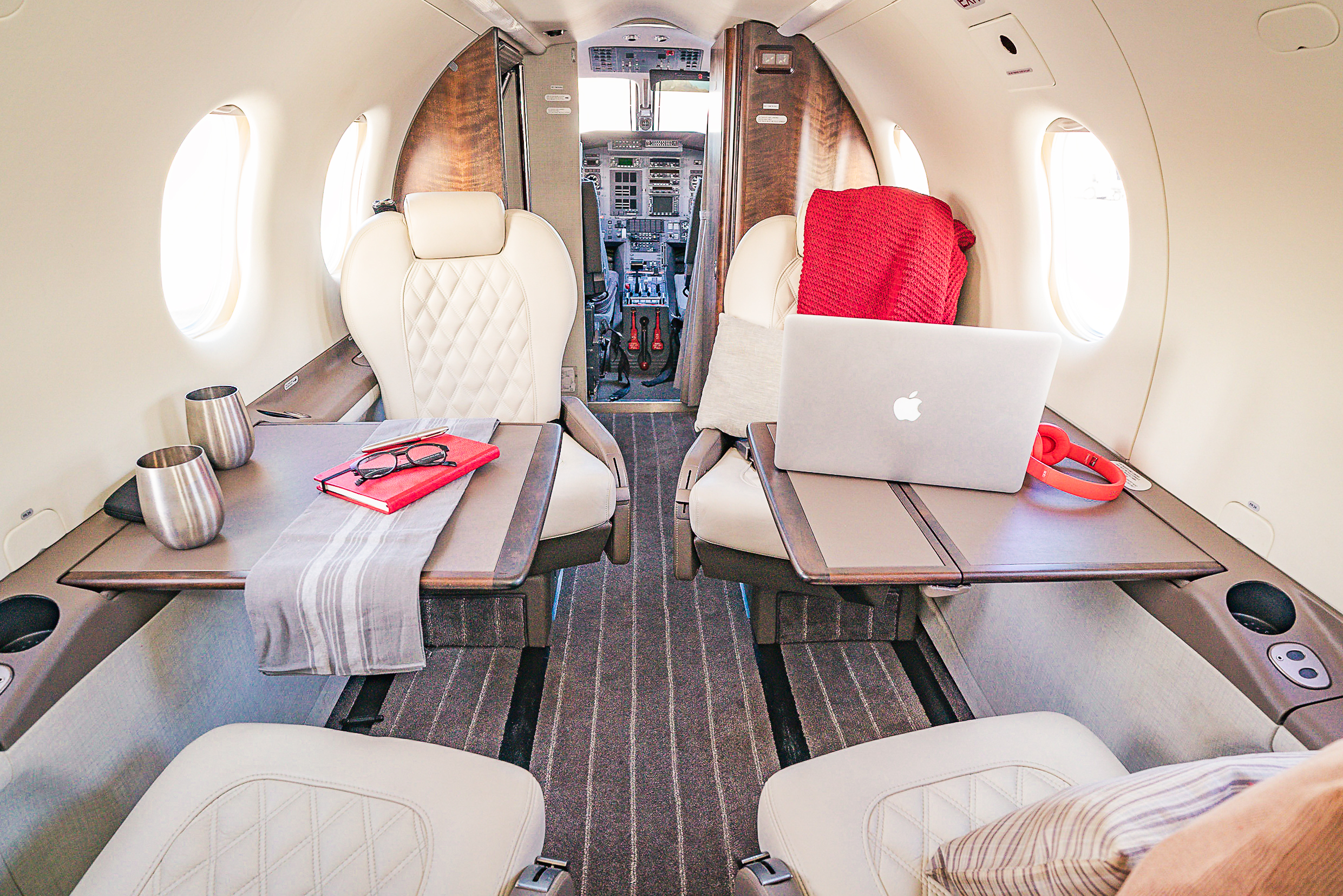 Chartered flights get a boost during the pandemic

As the global airline industry lost $370 billion in 2020, private aviation companies were quick to pick up the slack. CB SkyShare, for one, has seen an explosion in growth as more people have turned to flying private during the pandemic.

“You have at the top end of private flight, the NetJets and the FlexJets, which basically appeal to that top 0.05 percent,” says Michael Patwin, VP of marketing at CB Skyshare. To contrast, CB Skyshare caterers to the top two percent. “That’s a massive difference in how many people can actually afford the product and be able to experience the product.”

The company differentiates themselves by allowing clients to own a fraction of an airplane, while gaining them access to the entire fleet―and they tear down and rebuild all their pre-owned planes to make them look and feel brand new. This can be something of a leg up compared with NetJets, a more expensive competitor that―even if a client pays into a new plane―doesn’t guarantee they won’t wind up flying on a much older plane.

“We offer regular charter if you just wanted to rent a jet one time and go to Las Vegas or Scottsdale for the weekend,” says Cory Bengtzen, founder and CEO of CB SkyShare. “Or, we have the jet sharing program where you co-own one of the airplanes and then you have access to the entire fleet. We also service people who want to own their own airplane through our brokerage.”

Born and raised in Salt Lake City, Bengtzen spent 15 years in the auto industry, working his way up at a Ford dealership in Provo before opening two used car dealerships and owning his own bank. But Bengtzen always had a passion for aviation. After obtaining his pilot’s license and buying his first plane when he was 22 years old, he spent years flying whenever he could spare time―until the Great Recession hit.

“2009 came, and the car business was definitely not doing as well as it had in the years past,” he says. “I decided to sell the car dealership and just follow my passion for aviation. Back then, it was called CB Aviation, and our main, core focus was just buying and selling airplanes: basically [we were] a real estate agent, but our houses had wings, and they were all over the world.”

In April and May of 2020, SkyShare’s entire fleet was grounded while the world faced the first of many lockdowns. Luckily, the company had done well enough in prior years to pull through―and Q4 of 2020 ended up being the best quarter it ever had. “Even with the devastating second quarter, we were able to recoup and end up about 24 percent higher in 2020 than we were in 2019 in overall revenue,” Bengtzen says. “And so, I believe that the industry is shifting a little bit.”

The pandemic forced companies across the world to change their mode of operation. The number of flights has been greatly reduced, making scheduling difficult, and TSA regulations have increased, making the check-in process much more arduous. Plus, the potential of picking up the virus is high: when it comes to commercial air travel, there’s no way to avoid coming into contact with hundreds of people.

“[The pandemic has] pushed a whole new wave of people that had the means before to fly private but they couldn’t justify it, and now they’ve reached out to us,” Bengtzen says. To date, more individuals have been exploring plane chartering and participating in the jet sharing program than ever before.

As a result, a new phenomenon occurred: an increasing number of executives began using SkyShare’s private planes as a boardroom in the sky.

According to Bengtzen, owners of one of Utah’s most prestigious construction companies started using SkyShare during the pandemic, remarking how efficient the experience was for the team. In one day, they were able to travel to three different clients in three different cities―and prep for and debrief each meeting during the flight.

“To do the same three cities,” Bengtzen says, “it would take three to four days if they had to either drive it or do the commercial airlines, and yet, they’re having all their executives home by dinner the same night by using the boardroom in the sky.”

Plus by flying private, passengers can avoid exposure to COVID-19 by driving right up to a sanitized, private plane, and eschewing TSA entirely.

“I’m a true believer that private aviation can help grow many different companies just by the efficiencies that it gives, and there have been so many people that believe that they can never afford to do it,” he says. “And so our company goal is really to find different ways to bring the option of flying private―and make it more affordable―[to] more people so they can use the benefits.”

While Bengtzen believes that private travel will never fully replace commercial air, it definitely offers an uncontested level of safety, efficiency, and flexibility. “I do believe that what’s happened in the last year and everything moving forward, that the private sector, the private aviation side, is going to grow tremendously compared to the airlines,” Bengtzen says. “Once you start flying private, you’ll never want to go back.”

Giving back to the community

“[Cory] doesn’t have the luxury of coming from a network of people with tons of VC connections,” says Patwin when discussing the company’s evolution. SkyShare wasn’t born by pitching a concept to investors and then testing that concept with millions of dollars in the bank. Bengtzen had to bootstrap it.

“This company has to earn money every year to continue to exist and grow,” Patwin says. “This isn’t an ephemeral, non-tangible, pie-in-the-sky, ‘Hey! Let’s create something!’ This is, ‘Not only am I going to do this, but I have to make it work right away so I can grow it.’ I think that that’s what’s really impressive about our growth… it’s purely organic.”

But it wasn’t all about the high-dollar clientele. Bengtzen also wanted to create something that would help those in need.

“We partnered up with Angel Flight West, which is a really neat organization, and it’s full of aircraft owners and pilots that donate their time, and donate their plane [to patients in dire need of medical care],” Bengtzen says. He himself has flown a cancer patient along with the patient’s family to seek treatment at a proper facility that was located hours away from the patient’s home. “They would [otherwise] have to drive, and [that’s] such a horrible travel experience.”

In addition to fundraising for Angel Flight West and urging their clients to donate flights, SkyShare has been instrumental in delivering medical supplies to help stop the spread of COVID and has even conducted a special rescue mission: they were able to pick up six children from a devastating home life and safely fly them to their grandparents.

With its charitable efforts and dedication to the customer experience, it’s clear that CB SkyShare is more than just building an innovative brand: it’s redefining luxury travel as a whole.

“We’re graduating more and more into an experience marketplace where the luxury isn’t so much how it looks or what it’s made of; it’s sort of how it makes you feel,” Patwin says. “So I think if we’re going to define luxury as that, then I’m all about being a brand that’s centered in that.”