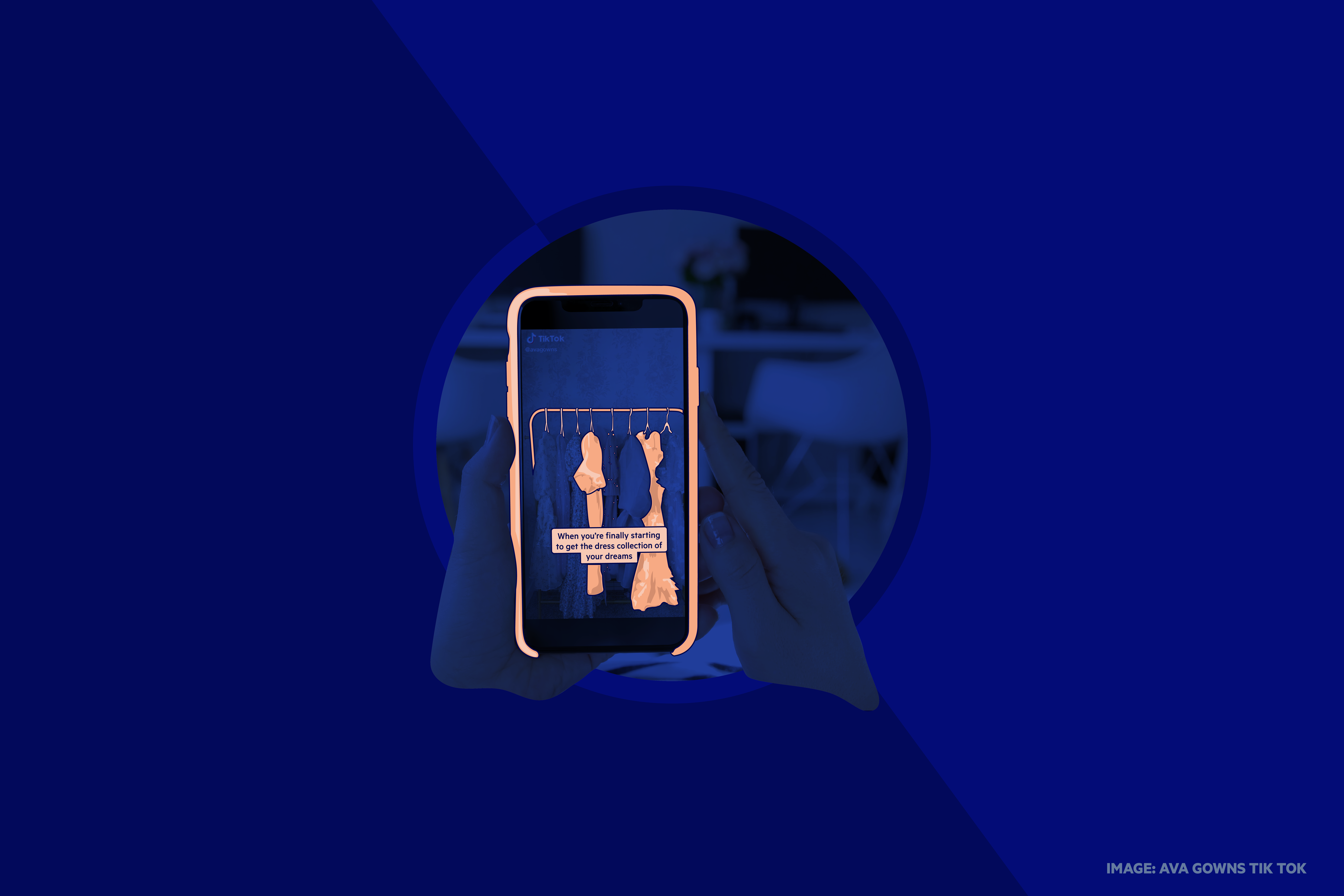 Ava Gowns is changing the way we talk about dress sizes

Ashlyn Froelic is a mom and homemaker. But for 20 hours a week, she’s also the founder of Ava Gowns, a Utah-based fashion retailer.

At this point, you may have already guessed how Froelic’s dreams came true: a viral TikTok video.

In March 2021, the morning before she posted her first TikTok, Froelic had 500 followers. When she woke up the following day, she had over 30,000.

In the months that followed, she posted more dress videos on @AvaGowns: unboxing dresses, trying them on herself, and behind-the-scenes designs. They started hitting view counts between 1-2 million. In each video, she linked her Instagram page—and her audience hit the follow button there, too.

“That’s what’s really amazed me about all of this,” she says. “How effortlessly the attention on TikTok converted to Instagram—I got 20,000 new followers on Instagram the same day.”

But while Froelic might seem like another overnight success story, she started building the foundation six years ago in 2016. “I tried to launch a woman’s boutique right before I had my first kid,” she says. “But after my pregnancy, I was too exhausted.”

Her next project was another boutique, this time for children’s clothing. It, too, fell to the wayside.

“None of the ideas really fit me or what I wanted for my life,” Froelic says.

Pivoting became second nature to Froelic as she faced the same feeling while building a social media following. She started on Instagram as a “mommy blogger,” but the more time she spent on the app, the more interested she became in the behind-the-scenes mechanics.

“I kind of got obsessed with researching algorithms and techniques,” she says.

In 2017, she transitioned her Instagram to more of a “tips and tricks” account, guiding other mommy bloggers through content creation. Her followers loved the photos and edits she posted on her account so much that she started branching out again, this time into photography—the gig that would eventually become Ava Gowns.

“The bulk of my business is photographing people in rented dresses,” she says. “And it became a hassle, organizing all of that, driving around the state.”

Froelic had learned a lot about what not to do from her earlier boutique attempts. This time, she was ready to go all in.

“I wanted to have my own brand with my own designs,” she says.

At first, companies would trade gowns for photos on her feed. But when she started offering design feedback to the gown company, she was surprised by their receptiveness.

“They turned out to be a manufacturer that was open to custom-making my designs,” she says. “Kind of a miracle, honestly, how smoothly things fell into place.”

She still works with the same manufacturer, who handmakes all Froelic’s designs in China and ships them to the states. While that process makes for a high-quality product, it also slows production times—a major speedbump in the early days of Ava Gowns.

“When I first went viral, I didn’t have any product,” she says. “None at all. And my website was flooded with requests.”

Froelic struck a deal with the manufacturer to pre-order product in bulk, and that’s how she continues to manage inventory: large, bulk orders. Shipping delays don’t deter her customer base, though. At any time, nearly every gown on Ava Gowns is sold out.

Froelic’s managed all this growth on her own, working to keep the books in order, update her social media accounts, design new dresses, and track orders—all with no formal business education.

“I never finished college,” Froelic says. “I went to Utah State University for one semester, and it just didn’t work out. I got married, had a kid, and never went back.”

She hasn’t felt a need to return to college in the years since, either.

“I’ve always loved doing my own thing,” she says. “It’s hard for me to have to listen to what someone else wants, to have a boss. I’ve never had a corporate job.”

And with the success of Ava Gowns, she might never need one. Those followers aren’t just numbers on a screen—they’re helping her turn a profit.

"I didn’t care what my parents thought, or the rest of my family or whoever. If you have to unfollow them or create a separate account, do that. Don’t let other people’s opinions stop you from doing what you love.”

Of course, the sudden influx of sales requests didn’t leave Froelic much time to really understand her audience. For months of filling orders, she was working off assumptions.

“I thought my audience was people interested in photography,” she says. “But when I looked at my tagged photos and my repeat customers—I mean, some of these people are buying their 10th dress—I found that my audience was mostly people living in California in the Disney community. They love to twirl in front of the castle at Disneyland and feel like a princess.”

The other subset of customers is girls and women preparing for dances and weddings.

“I got a lot of messages after that first viral TikTok,” she says. “So many [messages like], ‘These gowns are beautiful, but I could never wear them.’”

“Women thought they weren’t pretty or skinny enough to wear this kind of gown,” she says. “And if you look at other sites with gowns like these, they kind of push that idea—that you have to look a certain way—with their sizing and models.”

While Froelic already had inclusive sizing options on her gowns, she knew that wasn’t enough. That’s why, this fall, she’s debuting new labels for her dresses with different inspiring words.

Froelic says by changing the sizing charts, she hopes to impact how women actually see themselves.

“If you say these positive things about yourself, eventually, it’ll stick,” she says. “I just want to be part of that change.”

That sizing shift wasn’t just a good business decision—it was true to Froelic’s personality. “At the end of the day, I am the brand,” she says. “And these people were sharing their real feelings with me, their fears and hopes. If I’m not doing the same thing, if I’m not being authentic, then it feels like, ‘What’s the point?’”

Being an influencer is ultimately about vulnerability, Froelic says—and posting what you had for breakfast doesn’t count.

“If you want to grow, you have to commit to it,” she says. “Pretend that you’re a big influencer already. Even if other people are already talking about the things you love, share it anyway. Other people can’t post in the same way you can. People want a story.”

This is why, Froelic says, not everyone is cut out for a life of posting online.

“You have to set your fear aside,” she continues. “I didn’t start growing, even on my personal page, until I decided I didn’t care what my parents thought, or the rest of my family or whoever. If you have to unfollow them or create a separate account, do that. Don’t let other people’s opinions stop you from doing what you love.”