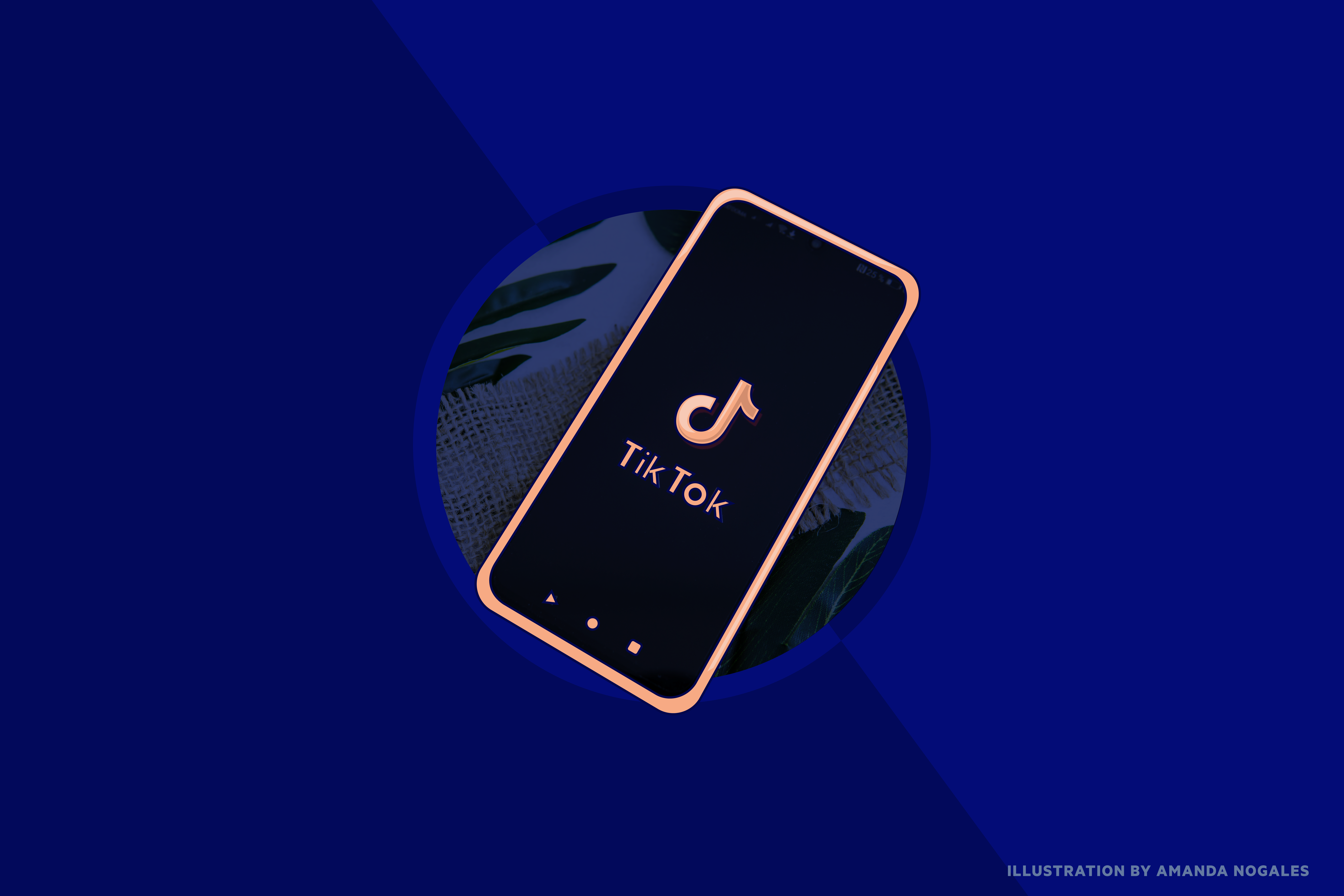 The phrase ‘overnight success’ is kind of overused,” Alayna Thompson says. “But there’s no other way to describe what happened to me.”

Thompson has always wanted to be a professional singer. Now that she has over 800,000 followers on TikTok, she might actually realize that dream. In the last year, she not only hit that follower count but also made enough money to pay rent a few times over and move to Los Angeles to pursue a career in music—and it’s all thanks to a viral TikTok sound.

This isn’t the first time Thompson’s voice has gone viral—but it is the first time it’s come from her account. Thompson grew up in Bountiful, where she’d perform in Woods Cross High School assemblies. “My friends would record me singing and tweet it,” she says.

In 2015, one of those performances caught fire: “A lot of retweets,” Thompson remembers fondly. But that wasn’t enough to get Thompson to post. “I had so much anxiety about it,” she says. “I think I just felt like no one would care about what I was sharing and that I’d just be embarrassing myself.”

But her decision to stay offline wasn’t totally motivated out of fear—“I just didn’t feel like I belonged,” she says.

Twitter was more about words than video. Vine limited posts to 6 seconds—not long enough to display her vocal talent. Music.ly, Vine’s successor, was mostly lip syncing. She’d really only made an honest effort on one site: YouTube. “It’s the 10-minute threshold for ads that killed my account,” she says. “To get monetized, I had to milk my content, putting long intros and outros as buffers, and that felt like a waste of time for me.”

And so it went. For years, Thompson was a passive user, watching the socials’ rise, fall, and (occasional) rebirth from the sidelines. Until TikTok. “I couldn’t put the feeling into words,” she says. “I just knew that if I wanted to be an artist, TikTok was where I should be.”

Thompson says her goal was never social media fame or the “influencer” title. “I want to sing,” she says. “Anything I was put on social media is to further that goal.”

A goal that, as time went on, necessitated some sort of online following. That change in perspective is what it took for her to make an account and, to a three-digit follower count, posted her cover of a Sam Smith song—within the first hour, it got 11,000 views. “I remember this freaking night like it was yesterday,” she says. “I had this feeling in my gut, that it was going to be something big for me.”

She was glued to her phone as the view count doubled, then tripled, then… disappeared. A few hours after posting, TikTok inexplicably took Thompson’s video down—now, almost a year later, she still doesn’t know why. “It was the middle of the night, and I was just lying in bed, sobbing,” she says.

At the time, Thompson was working at LDS Hospital while she prepared for PA school. Medicine had always been her backup plan, but when her TikTok career defaulted, it was suddenly plan A again. Before she drove to work the next morning, she filed an appeal request, a process that felt like “sending an email to the void.”

“I felt like I was too late to every app, that I was messing up my chances. But I guess when you wait for the right moment, the right thing happens.”

But her story wasn’t over yet: the rollercoaster of a weekend continued when she logged on at the end of her shift to see the video back up—and gaining traction all over again. “I do think about that sometimes,” she says. “How much better would the video have done if that never happened?”

“Better,” of course, is relative—right now, that video sits at over 10 million views. “It does feel like it was meant to be,” she says. “It went viral, got taken down, reposted, and then went viral again.”

What really caught on, though, was the sound. If you were on TikTok at all in late 2021, you probably heard Thompson’s cover repeatedly. “Paris Hilton used it,” she says. “That still might have been the craziest thing that’s happened to me so far.”

Thompson says she hit 300,000 followers in the first week, and then had steady growth— 10,000 new followers a day, give or take—for months afterward. “When I hit 80,000 followers people started reaching out to me,” she says. “It was so weird, like that was the threshold. That’s when I started hearing from labels, managers, and when the brand deals came in.”

…Brand deals that she hurriedly accepted, regardless of applicability. “Bed sheets, photo printing, a Metaverse company, none of them had anything to do with my music,” she says.

It became a cycle: the more deals she did, the more followers she got, the more she wanted to post. That was in October 2021, about a third of the way through Thompson’s fall semester of her junior year at BYU—and just past the deadline to drop classes without penalty. Thompson knew she had PA school applications to think about, and her job, too. Her TikTok getting popular was one thing, but when she started to make real money from it? That was the final straw.

“I dropped three of my five classes,” she says. “I got a bunch of W’s, but it didn’t matter to me anymore. I dropped my work hours. I put my foot down and just declared ‘Music is what I care about, and I want it more than all of this other stuff.”

It was more than just school and work: her zip code changed, too. “Other musicians started messaging me on TikTok, wanting to collaborate,” she says. “They always led with ‘Where are you based?’ I’d say I was living in Utah and literally every time: ‘Okay, let me know when you’re in LA,’ and so we decided, ‘Why not?’”

Throughout her whirlwind of a year, at least one thing has stayed the same for Thompson: her and her husband alone manage her email address—and all her income. “I think it’s important to be wary of too many promises,” she says.

One of the management teams that messaged her early on felt “sketchy.” A month later, the company dissolved. But even with those firms that stuck around, Thompson says they’d ask her to do things she wasn’t comfortable with. “One manager was really excited to sign me,” she says. “But they wanted a ‘story.’ Literally, they wrote a whole new background for me, like ‘So you’re still married to a man, but secretly you’re a lesbian.’”

If she didn’t play along, she wouldn’t get the deal. That kind of stuff, strange as it seems, has been the norm for Thompson. “Imagine the weirdest shiz you can think of,” she says. “And that’s what’s in my TikTok DMs.”

Traversing social media virality without a manager has come with its pitfalls, though. “In the early days, I think I let brands take advantage of me,” she says. “I thought $200 was a lot of money.”

Now, like other content creators, she’s put time and research into making her own rate sheets. “Don’t let yourself get too mesmerized by people reaching out,” she says. “You have to be confident and persistent in order to get a fair deal.”

But even that’s not enough: Thompson says you also must be looking at the right time of year. “In the fall, I was making around $2,000 a month just from brand deals,” she says. “But then I didn’t get one offer from June until September.”

According to Thompson, that kind of seasonality isn’t uncommon. “Summertime is a down period for brands,” she says. “In my conversations with other creators, I learned that companies just don’t reach out as much during those months, and then come back again like nothing happened in the fall and winter.”

While she says that surprise tested her bank account, she’s still in good spirits—her Sam Smith cover now has over a million streams on Spotify, and she’s recording and mixing new, original music. “Looking back, I can see how everything didn’t work out for a reason,” she says. “I felt like I was too late to every app, that I was messing up my chances. But I guess when you wait for the right moment, the right thing happens.”