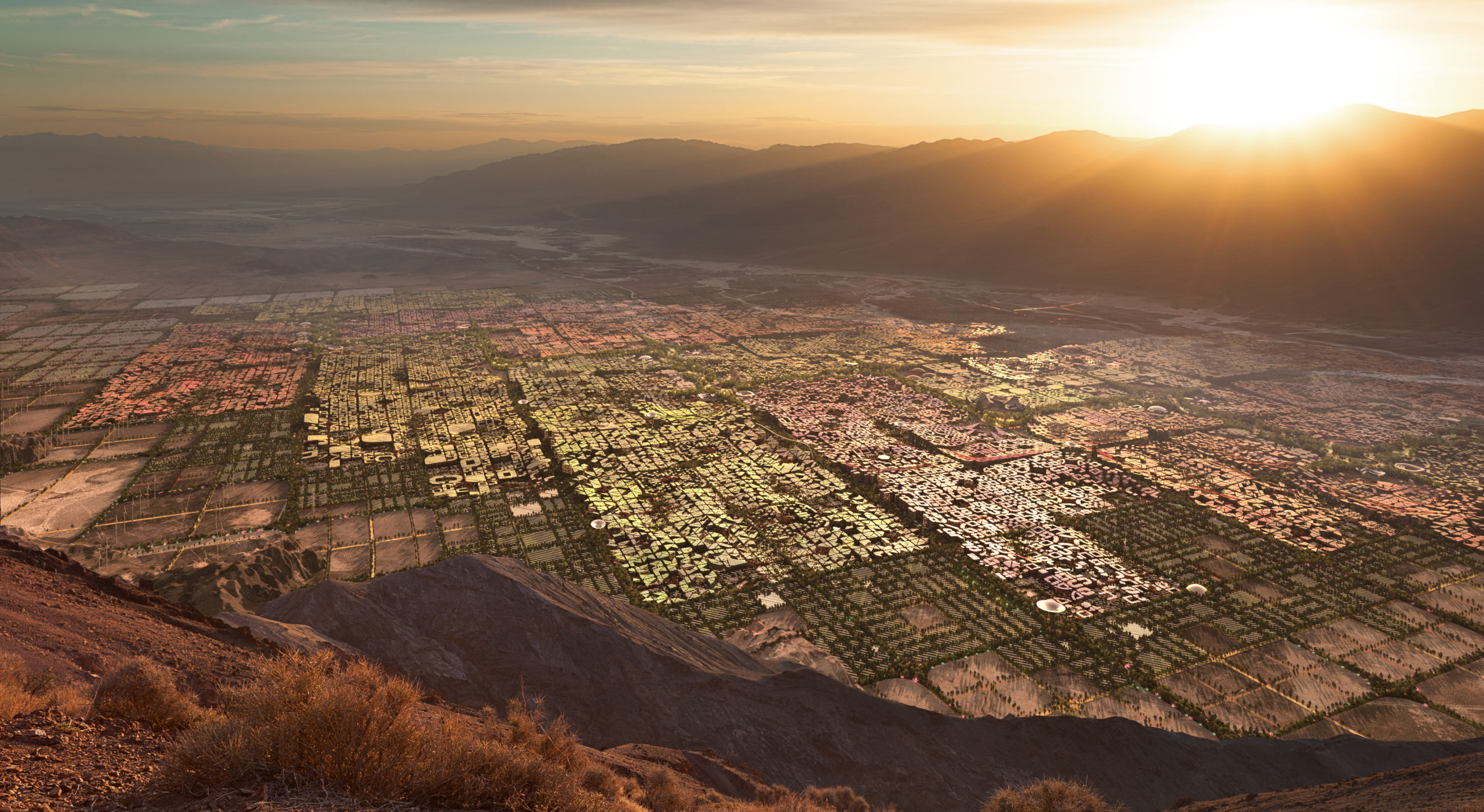 The futuristic city of Telosa might be coming to Utah

Billionaire Marc Lore is looking at Utah as a potential home for his new city, Telosa. The state is among a handful of locations, including Nevada, Idaho, Arizona, Texas, and somewhere in the Appalachians that Lore is evaluating based on economic and regulatory state policies, regional taxation, types of industries and workforces, energy, food, water, waste and materials, climate, infrastructure, availability of land, and liveability.

Lore earned his fortunes when he sold his startup Jet.com to Walmart for $3.3 billion in 2016. Before that, he sold Diapers.com to Amazon for $545 million in 2010. He’ll finance a chunk of the $500 billion projects with his own money by tapping philanthropists, government grants, and private investors and contributing money from his own pocket.

Telosa would retain ownership of the land, though anyone could build and sell homes. As the city grows, the land value would ideally also grow over time—funneled back into the Telosa foundation, investing the proceeds and using earnings to pay for equal access to healthcare, good schools, parks, safe streets, and transportation.

This is the place

Utah kind of has a thing about creating paradise. The state has been home to a long line of groups that sought new community, religious, or economic ideals dating back to Latter-day Saint leader Brigham Young in 1845. After traveling through Texas, Northern Mexico, and Oregon, Young zeroed in on Salt Lake City until, in 1847, he led 12,000 pioneers to the valley and famously said, “This is the place.”

Young sought a safe home for the members of The Church of Jesus Christ of Latter-day Saints that would be out of reach from the US government—Utah didn’t join the union until 1896. There, he assumed, “Mormons” would be free from outside economic and religious influences, says Paul Reeve, University of Utah history professor and chair of Mormon studies.

The pilgrims set up various economic “missions” across the area. There was the iron mission in Cedar City, the cotton mission in St. George, and the lead mission in Las Vegas. Residents had no private property, and everyone lived communally, sharing housing, dining halls, and even wearing unit-ordered clothing and eating the same food.

A few years later, church members started the ZCMI, later dubbed America’s first department store, where residents were to buy all their goods. The idea was to insulate themselves from the fluctuations of capitalistic market forces and cyclic downturns, Reeve says. “It was an effort to take care of themselves. This idea of utopia.”

It didn’t work out as they hoped. Most of the missions failed due to backbiting, selfishness, and dissatisfaction with goods within a year.

Researchers have studied utopias since the 19th century and found that those kinds of economic models rarely work, says Mark Gillem, an urban design professor at the University of Oregon. “They’re counter to human nature,” he says, which is innately selfish and out for one’s self.  He says that most cities grow organically over time versus a top-down economic model.

But the idea of creating a utopian city has seen a resurgence among wealthy individuals. Bill Gates plans to build a 2,800-acre smart city outside of Phoenix. In Nevada, Jeffrey Berns—who earned his millions in cryptocurrency—plans to build his own smart city on 67,000 acres. Prince Charles started Poundbury in England, which has no zoning and is designed to limit cars.

“There is a lot of ego involved and a desire to make an impact,” Gillem says.

In Utah, there’s long been a preoccupation with building the promised land, or what some call Utahopia. Both “Mormon” and “ex-Mormon” venture capitalists have fueled paradisiacal projects. “A lot of our values in Utah that came from our founders echo through the ages, so to speak,” says Ben Kolendar, Salt Lake City’s director of economic development. “A lot of innovative ideas are tested here.”

“Usually, the commodity is, how isolated can you be? Here, it is all about being close together and celebrating that,” architect Brian MacKay-Lyons told the Wall Street Journal.

Utah also saw the rise of Daybreak, a 4,000-acre planned community in South Jordan designed to have energy-efficient and sustainable homes, with some even located on the waters of Oquirrh Lake. A 1 percent surcharge on all home sales funds the community’s amenities and activities, and a stage was built in the center to draw restaurants and art performances. In the next 20 years, the community could comprise 20,000 residents and 9.1 million square feet of commercial space.

The developers, a subsidiary of mining company Rio Tinto, will build The Point, a car-less community that “fosters innovation and technological advancement” on 600 acres of state-owned land.

Designing the city of the future

The state’s wide-open spaces and natural beauty have long made the state attractive to “rugged individualists who want the government to stay out of their business,” Reeve says. And it’s increasingly showing up as an attractive hotspot today. Utah has been recognized as a top place to live and start a business, touting more tech company exits and millionaires than much of the country. Just this year, Provo/Orem and Salt Lake City landed in the top four of the Milken Institute’s Best Performing Cities due to growth in jobs and wages.

“Fifteen years ago, trying to recruit people to come to Utah was kind of like, ‘No, I’m going to stay in the valley,’” Utah tech billionaire Ryan Smith told Fox Business this year. “(Now) people are saying, ‘Hey I want to come here, I’ve heard about it, I have friends who have relocated.’”

Not everyone believes the state is a promised land, however. “There are definitely things that are great about Utah: the work ethic, our ability to sell things, our younger population, it’s a great place to start a business and a great place to live,” says Luke Gunderson, founder of Beehive Ventures in Lehi. “But I wouldn’t say it’s a mecca.”

Still, there’s one thing that Utah has a lot of: open land. Lore’s team has visited Utah several times and spoken with business leaders and residents over the last year, and they will start talking to state officials early this year. He says that Utah has plenty of attractive qualities, including less regulation and a financially healthy state.

“And if they’re looking for desert, we’ve got plenty of that,” Kolendar says. “People are going to come because there is a huge demand for housing.”

Lore’s team intends to develop innovative approaches to water, and if so, it could be replicated elsewhere and be evolutionary to other cities. If it doesn’t, then it could be problematic, stressing an already taxed state that’s facing one of the most severe droughts in recent memory. The Colorado River is drying up, and many western states, including Utah, will face mandatory water cutbacks.

Deciding to build a city is one thing, but actually running it is another, Kolendar says. A massive backend goes into a city, and Telosa’s site must be strategically located to be close enough to another city to tie into sewer, roads, highways, and water. He says there must be services for garbage, paving the roads, processing building permits, and building a diverse economy to ensure it all doesn’t crumble with one recession.

“No matter what city, you’re going to have expenses and revenues. How are you going to make that work, and who makes decisions?” Kolendar says. “There are some realities there, but I like the bold vision.”

Lore plans to start talking to state governors in January of 2022 and select Telosa’s state partner by the end of the year. Lore’s 50-person team of volunteers and paid staff will pick the exact location in early 2023.

“We are reviewing potential locations at a high level and have analyzed two sites in the US  in greater detail. We are applying architectural, engineering, economic, and transportation resources to the analysis. Ultimately, we will need to engage local people before we make a decision,” says Jon Mallon, a founding member of Telosa.

Lore estimates that Telosa could someday cover 200,000 acres—about the size of New York. He’ll seed the city with 50,000 people of diverse ages, incomes, races, and religions, and eventually, 5 million people would live there. His venture capital fund would invest in startups that planted their roots in Telosa, and residents would come for jobs, education, and “a new way of life,” he says.

“If we created a new, modern American city of 5 million people in a desert, that land would be worth a trillion dollars,” Lore says. The Telosa foundation would accrue this value and then sell off the land to create a diversified portfolio of financial assets, such as hedge funds, stocks, or bonds. The investments, he says, could earn $50 billion a year. That could allow all residents to benefit from good schools, healthcare, and city amenities, no matter their income.

“So you’re basically going to have three times more than what’s invested today in social services,” Lore says. “It’d be an enormous change in the wealth and income gap.”

Lore’s team is determined not to fall into the pitfalls of other idealistic communities despite the lofty hopes and desire to create a new kind of society. The Telosa team is working with experts in various fields of study to determine the most sustainable infrastructure, urban design, economy, and city services. Mallon says that no solution is perfect, and all human systems have flaws. Mallon says they looked into past projects to pinpoint how to best avoid their mistakes.

“Finding innovative solutions for those problems can seem utopian, but, in reality, everything we’re doing is based on facts and research,” Mallon says. “This is not a utopia.”

If it were, Utah might be the perfect place to try just one more time.

Note from the editor: A previous version of this story neglected to mention that there are other locations being considered for Telosa. These locations are Nevada, Idaho, Arizona, Texas, and the Appalachian region.