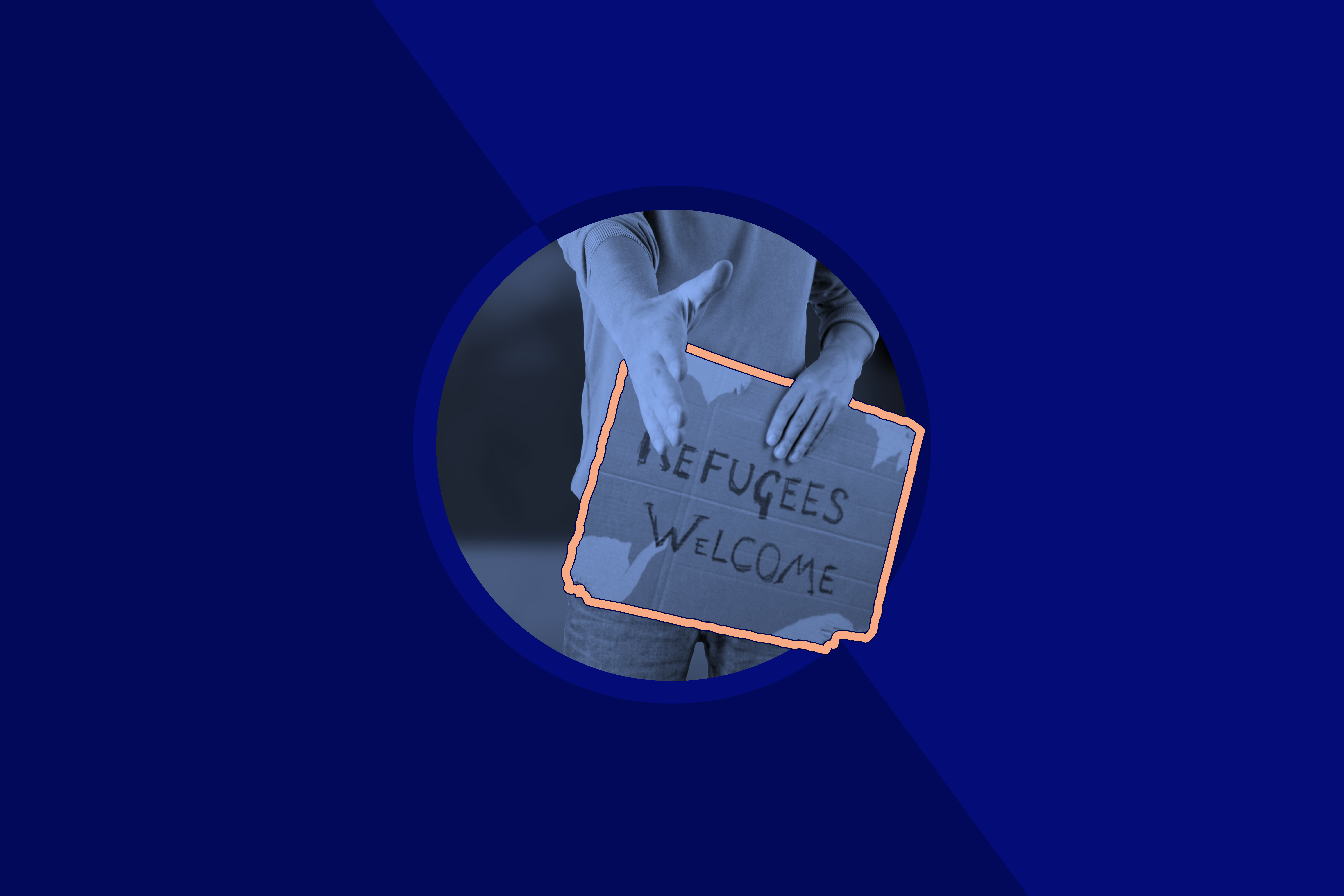 After a series of life-threatening situations, Abdul Baryalai and his family knew they needed to leave their home country of Afghanistan.

“That was the only solution to keep myself [and my family] alive,” he says.

Through the Special Immigrant Visa program, the Baryalais were able to choose where in the United States to relocate. For Abdul, the decision was easy: Utah.

“A friend of mine had already been living here for a year and told me a little bit about the environment and how friendly Utahns were,” he says. “[My friend] encouraged me to come to Utah, and if I do not like it, I may choose to move to a different state.”

That was back in January 2017. Almost six years later, he can’t imagine living anywhere else.

Even with the high praise from his friend, the Baryalais were skeptical about what awaited them here.

“We actually did not expect a lot of things that were provided before we came to the US, such as medical insurance, housing, [a] food card, resettlement, and so on,” he says.

In some other states, the Baryalais may have been right to be nervous. But in Utah, being the “most welcoming” state is a constant goal, says Aden Batar, director of migration and refugee services at Catholic Community Services of Utah (CCS).

“The people in Utah work together to offer newcomers everything we have here,” says Batar, who came to Utah as a refugee in the 90s. “It’s that combination that gives us our good reputation.”

CCS is one of two major resettlement agencies, the other being the International Rescue Committee (IRC). Together, these organizations work to provide the resources that Baryalai says made his move easier.

“During resettlements, we help find housing, employment, healthcare, along with educational opportunities for them and their children’s education,” Batar says. “We try to cover their basic needs.”

Resettlement agencies also facilitate a foster care program in the state for unaccompanied minors. All the above are grouped into a process called “case management,” which the federal government requires to be provided for at least six months after arrival.

“Most states do whatever it takes to fulfill the contractual obligation and nothing more,” Batar says. “Here, we go beyond that.”

Individuals resettling in Utah get 12 months of case management, which is double the average, while families can get up to 15 months.

The Utah Department of Workforce Services is tasked with contracting providers to get this resettlement work done, acting as the pass-through entity for federal funding—dollars both CCS and IRC rely on.

“It’s normal to have multiple resettlement and management entities calling back to the states,” she says. “I’d say that structure is typical. What we do in Utah, though, is expand it.”

By including refugee services under the UDWS umbrella, Parekh says their reach is much broader than the reach of other states. For example, while the department at large works on employment support or short-term training, Parekh’s team is nearby to tweak the approach for refugees specifically. Their office places refugees in jobs all the time. In fact, Baryalai found a position as a refugee community specialist there, where he still works today.

Parekh’s team is also on the governor’s refugee advisory board in addition to hosting quarterly consultations with resettlement agencies.

But it’s not just theoretical structures that offer more resources to refugees in Utah than other states—Parekh says the physical structures are what have brought the most value.

“We have a refugee center that provides direct support for refugees,” she says. “The purpose of the center is to help refugees access better-paying jobs and build community in this new place.”

The center is open on evenings and weekends when many agencies aren’t, offering an around-the-clock gathering space. Parekh says it gives the office the opportunity to participate in the resettlement process from multiple angles, something that other state entities just don’t do.

“Accessibility to a place like this makes a big impact,” Parekh says. “Our office was founded with the goal to build better trust with the refugee community, and all of the above are our efforts to meet that responsibility.”

On the funding side of things, Batar says as a resettlement agency, they’re able to receive several million dollars in federal grants facilitated by Parekh’s team. There’s a catch, though: the grants must be matched by private dollars.

“Accessibility to a place like this makes a big impact. Our office was founded with the goal to build better trust with the refugee community, and all of the above are our efforts to meet that responsibility.”

Luckily, Utah’s a leader there, too.

“Government funding isn’t enough to cover all of these services, so we’re always looking to work with the business community, foundations, individuals, and religious organizations in the state to help bridge that gap,” Batar says. “And every time we’ve reached out, there’s never a shortage of volunteers. To know that when we appeal to the community that they’ll respond, that’s confidence that not every state has.”

It’s been a relief, Batar says, as resettlement numbers in the state—and the country—have spiked in recent years.

“Generally, they all fled conflict in their country of origin and are similar in that regard,” says Aldo Hall, the data and evaluation coordinator at the IRC office in Salt Lake City.

The difference in terminology comes down to status: while a refugee’s ability to remain in the US is more permanent, a parolee’s status is limited to two years. Approved applications allow parolees to switch to asylee status and remain longer.

Status also impacts who can use what money. Parekh says there are specific pots of federal money for schools and the elderly, as well funds earmarked as Afghan- or Ukrainian-only. Base funding is also determined by the previous year’s arrivals, a method that can prove detrimental in spike years like FY2022.

Looking at the total displaced people groups resettled by the IRC and CCS combined, the total arrival number in Utah shot up to, by UDWS’ count, 1,570—“a much bigger number than we’ve had in the past,” Parekh says.

The arrival spikes were caused by a variety of factors.

“Previous administrations decimated the resettlement pipeline,” she says. “That’s the biggest reason. But then we add in Covid, which made it difficult to do the necessary overseas work.”

That’s thanks to the federal efforts to “rebuild the resettlement pipeline” through legislative action and individual states’ undertakings.

“Our leadership sets our state apart,” Batar says. “When the previous president closed the doors, our governor stood up and said we were a safe place for refugees regardless of religious background. We’ve seen that consistently: when Afghans were evacuated and with the crisis in Ukraine, our government has been one of the first to offer help.”

The only barrier to welcoming more people? Ourselves. While bringing in as many people as we can is a noble act, Parekh says it’s turned out to be a double edged-sword—one that might even jeopardize the “most welcoming state” status.

“Even though we all have big hearts and want to bring everybody in, we have to realize the practical limits we’re facing,” she says.

The “practical limits” she’s referring to all stem back to affordable housing, a crisis that Utahns face state-wide.

Until the circumstances change—either through the economy at large or massive funding projects targeted at construction—Parekh says Utah has a built-in limit to how many people it can reasonably welcome.

“The high cost and lack of availability make a huge difference in the resettlement experience,” she says. “I think, though it may sound counterintuitive, that we could be a more welcoming state for refugees by doing our due diligence. We should be balancing the number of arrivals in our state to the real availability of long-term support.”

If that change is achieved, displaced persons that come to the US may be able to have as good of an experience as Baryalai—or even better.

“As an immigrant, I was not aware of these resources and services for years,” he says. “Considering my past experience, I want to make sure the new arrivals do not experience the same thing but rather get connected to these resources as soon as possible.”