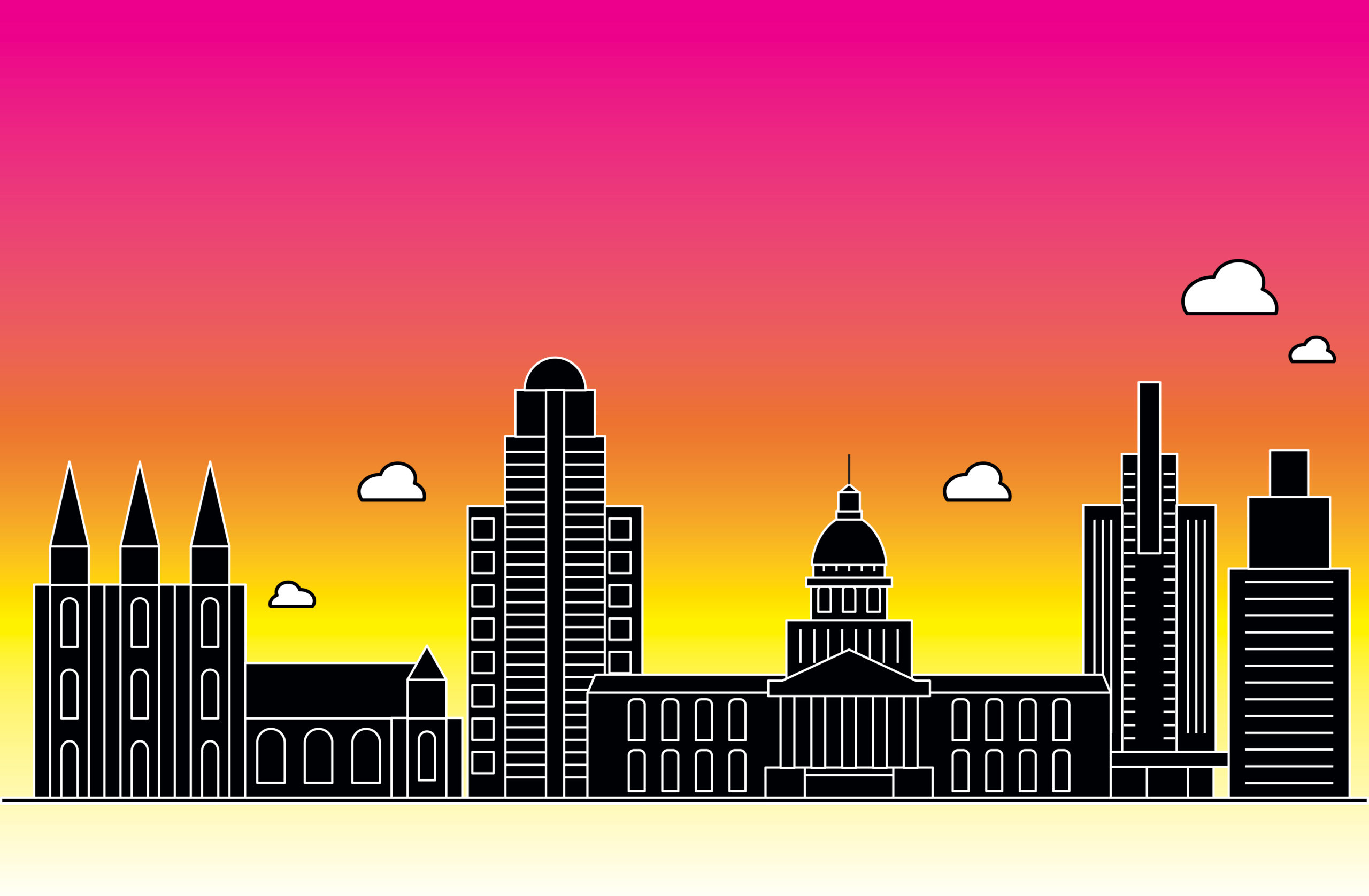 Salt Lake City is getting a ton of high-rise buildings

After years of growing out, Salt Lake City may finally grow up.

Cranes and construction vehicles have taken to the city streets as myriad developers embark on 24 large urban buildings that will remake the skyline of a city that, up until recently, has been described as “one really big town.”

The urban frenzy is in sharp contrast to the decades of outward growth of Salt Lake City over four counties along the Wasatch Front. Several years ago, Utah earned the dubious honor of having the second-fastest urban sprawl rate in the country—with Salt Lake City ranked one of the worst.

“Over the last five to 10 years we’ve noticed an expansion of the area that’s just unsustainable,” says Andrew Wittenberg, marketing and research manager for Salt Lake City’s Department of Economic Development. “There just isn’t the landmass to keep growing out. We now have an opportunity to rethink how Salt Lake City grows.”

New projects on the horizon

Developers are heeding that call, embarking on a slew of ambitious buildings in the city’s core—some of which will reach 37-stories high. This construction comes at the same time as a $4.1 billion renovation of the city’s airport and a controversial 20,000-acre inland port.

The boom in Salt Lake City is not surprising, given that both the state of Utah and the Salt Lake City area routinely land at the top of nationwide population growth, economic growth, lowest taxes, best education, best business climate, and best place to live lists.

With its population surging 18.4 percent over the past decade to 3.28 million people, according to the US Census Bureau, Utah is now the fastest-growing place in the nation. By 2065, Salt Lake County’s population of 1.2 million people could grow by 50 percent, adding 600,000 new residents, according to a University of Utah study.

Yet both Utah and Salt Lake City tend to hover at the top of some less desirable lists as well—mainly for worst sprawl, bad traffic, and air pollution. Utahns, like all Americans, live by the ethos of open spaces, cars, and single-family homes, and the Salt Lake City area in particular possesses plenty of cheap and available land.

As a result of sprawl, Salt Lake has the seventh-worst air quality in the world, according to an analysis by California-based digital media firm Quote 360. In 2018, a study by University of Utah researchers found that over a decade carbon dioxide emissions increased in suburban areas southwest of Salt Lake City—while similar population growth in the center of the city did not. The authors chalked the reason up to one simple thing: lots and lots of cars.

Urban sprawl contributes to a third of all greenhouse gas emissions around the globe, and if that sprawl were to be curbed, it could slow climate change, according to research by Delft University of Technology in the Netherlands. It also eats up wildlife habitat and farmland and threatens the planet’s sustainability: In the last 16 years, the US has lost 24 million acres of natural land in part to housing sprawl—an amount of land equivalent to nine Grand Canyon National Parks, according to the Center for American Progress.

Salt Lake is among many cities nationwide being pressured to rethink urban planning for more efficient land use, as well as institute better building standards and promote more public transport. But it will take more than buildings to make Salt Lake City a great liveable downtown.

Culture, arts, walkability, public transportation, green public parks, and a sense of community have been shown to truly make a city desirable, says Mark Gillem, University of Oregon professor of architecture and landscape architecture. The best-designed cities use parallel parking, hidden parking lots, narrower streets with bike lanes and trees, and lots of parks. Those cities that designate at least 10 percent of the landmass to public parks can also absorb stormwater and improve air quality, says Gillem.

Salt Lake’s planning department intends to create a “green loop” around the city made up of open space and parks, as well as add more safe transportation for residents, whether that’s biking, walking, or public transit. Salt Lake City has begun moving in that direction by expanding its light rail system. But right now, a fraction of city land is open space. Says Gillem: “It’s just a very gray landscape.”

Changing for the better?

With the infill projects, the downtown living population could double, adding 7,000 residents within three years—but that number is still minuscule compared to the 1.18 million people in all of Salt Lake City.

By developing the mixed-use walkable environments around its developing light rail system, “Salt Lake City is definitely doing exactly the right thing,” says Lawrence Frank, an urban studies and planning professor at the University of California at San Diego. Frank spent 33 years documenting the health benefits of walkable communities, and found that just living near walkable shops, services, and restaurants greatly reduced the odds of developing diabetes and heart disease.

City officials intend to create more walkable live-work areas which will spawn new grocery stores, coffee shops, pet stores, dry cleaners, and other needed businesses. “We want to create an 18-hour downtown where people live and wake up here in the morning,” says Dee Brewer, director of the Downtown Alliance.

The good news: there is pent-up demand for people to live in places where they don’t have to drive as much. A third of people who live in car-dependent suburbs say they’d prefer to live in a walkable area, according to Frank.

Younger residents are driving a renaissance of cities globally, since this generation tends to place far less value on having a house with a yard or even owning a car.

Utah’s population skews young—with a median age of 30.8 years—and Salt Lake’s blend of urban life and the outdoors could be appealing to those people, says Brewer.

Downtown is just 20 to 40 minutes away from hiking and skiing in the Wasatch Range and it’s three hours from mountain biking and camping in the red rock desert. Housing, too, is still more affordable than coastal cities. Salt Lake City homes cost about 71 percent less than those in San Francisco, according to LeavingtheBayArea.com.

Yet the new construction has not been welcomed by everyone. Before the city planning commission approved the 150 Main Street project in July, protesters staged sit-ins to prevent the demolition of the historic Utah Theater. It ended with an arrest.

Not far from the fray, Ken Sanders has been watching the cranes construct 10-, 20-, and 30-story buildings. The owner of Ken Sanders Rare Books says that a corporate investor plans to tear down the building that’s been home to his bookstore for 20 years and will replace it with another high-rise, leaving him with no place to go. “We’re next,” he told Fox 13 News this summer.

And the urban infill won’t do much for sprawl unless the rest of the county and neighboring counties rethink their approach to growth. Says Gillem: “You can build 22 downtown buildings, but if they continue to build 400 acres of sprawl on the edge, all the benefits of infill will be obliterated.”

The Astra Tower: This 448-foot skyscraper at the northwest corner of 200 South and State Street in Salt Lake City would feature 380 luxury apartments and an open-air rooftop terrace.

The Brinshore Development: At 225 South State, two glass and metal towers, one reaching 12 stories and the other eight stories, should bring much-needed affordable and workforce housing to the area.

The Hyatt Regency convention center hotel: This 25-story on South West Temple will include 700 guest rooms and should be complete in 2022.

The Sundial Tower: The 23-story building on Main Street and 500 South and will offer the most expensive office space in the city.

370 S. West Temple: This $210 million apartment high-rise will include a restaurant and a hotel—with a pool, rooftop terrace, sky lounge, and remote work facilities.

The West Quarter: This is a massive project that will push the heights of the city’s skyline. The first phase includes an 11-story tower with luxury apartments and ground-level retail space. A second, 11-story building called the Grid Hotel will be complete next summer. The developer, the Ritchie Group, has also proposed future plans for 650 more apartments, two hotels, an office tower, retail shops, tree-lined streets, and a 1200-space underground parking.

The Paperbox Lofts: The seven-story building will include the first standalone mechanical car lift system in Utah, as well as 184 live-work residential units, a wellness center, and a pocket park.

150 Main Street Apartments: The 31-story skyscraper was the center of controversy this summer, when protesters staged sit-ins to fight plans to tear down the old Utah Theater to make room for the tower with 400 apartments, 8,400 square feet of retail space, and a pocket park and walkway connected to Regent Street.