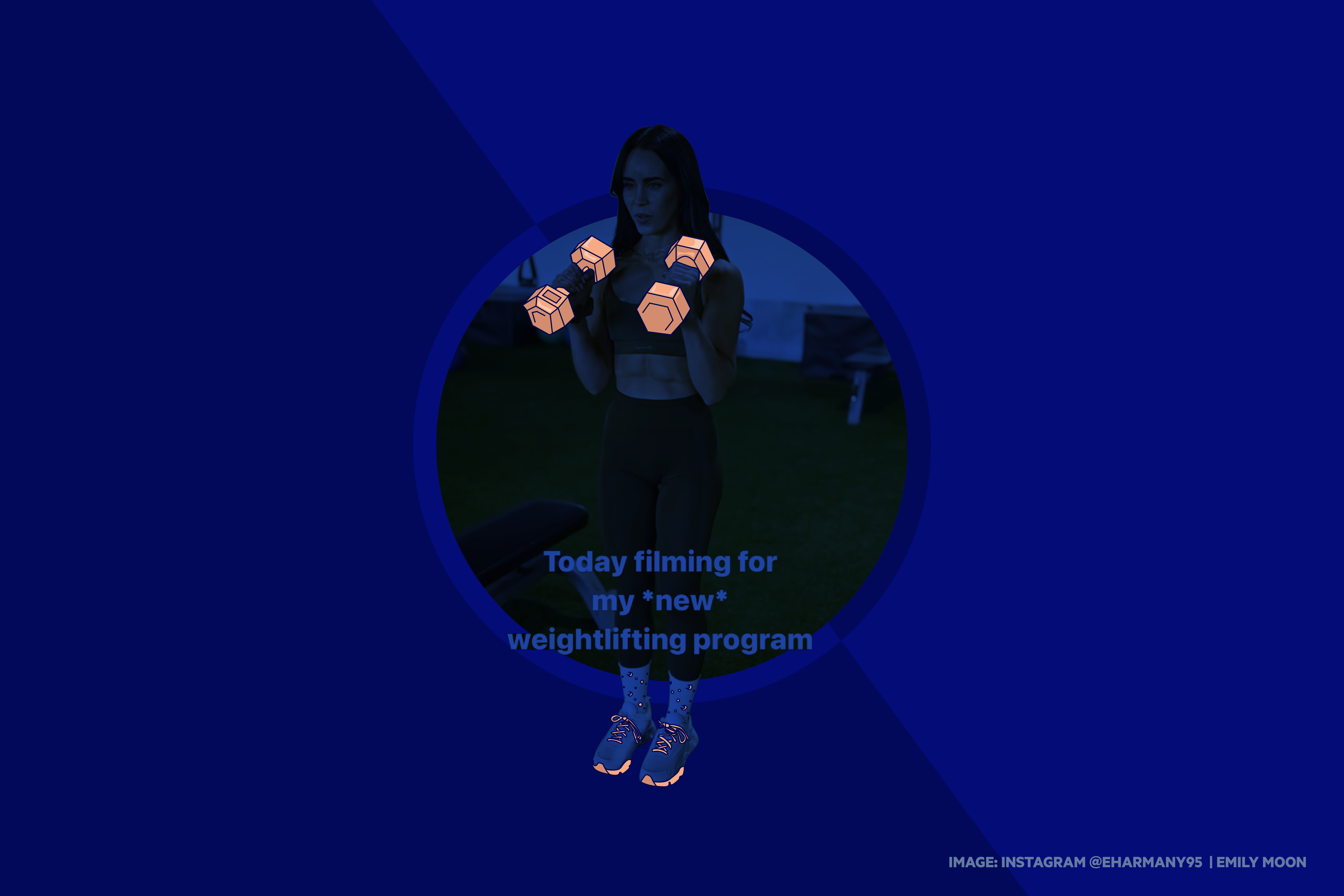 When Emily Moon started her fitness Instagram three years ago, she didn’t have grand expectations.

“I never thought I’d be able to make money,” she says, laughing. “I wanted to be an influencer for two reasons: vanity and Alphalete.”

She achieved those standards. Today, Moon has 130,000 followers on Instagram and nearly double that audience on TikTok. Just last year, she even secured an Alphalete partnership.

It didn’t happen overnight, though. Moon’s humble beginnings looked like 900 followers and a lot of free time, she says.

“My husband and I moved for his work,” she says. “I left my job when we relocated, and I didn’t have any friends or family in the area. I was just very bored.”

To fill her time, Moon started going to the gym. That routine morphed into structured workouts, meal planning, and what would change her career trajectory: gym apparel.

“I’d order gym clothes, try them on, and take pictures around town,” she says. “That’s what I did for fun. I’d style gym outfits and post the photos with reviews of the items.”

That’s how Moon came across Alphalete, an athletic wear company started by a fitness YouTuber.

“As soon as I tried on my first pair of leggings, I knew nothing else would meet that standard,” she says. “I ordered more and more clothes from them. It became kind of like an obsession.”

Soon, all her outfit posts were in Alphalete clothes.

“People knew me as the ‘Alphalete girl,’” she says. “I’m sure half of my tiny following were sick of it, but I just kept posting. I really wanted that partnership.”

And it seemed like that partnership was on the horizon. The more she posted, the more followers she got. Moon was close to 3,000 followers when she found out she was pregnant.

“My whole life, I feared pregnancy,” she says. “Mine was planned, but still—I was afraid of getting sick, of being out of shape, all of it. Once I got the results, I remember thinking, ‘Kiss this body goodbye!’ Like, seriously. I didn’t believe I could be a ‘cute fitness girl’ anymore.”

Moon took some time to sit with those thoughts. She came out on the other side with a realization: whether or not she fit a specific mold, she was having fun. Why stop now?

“I kept doing what I was doing; it’s just that now, I was pregnant,” she says. “At the time, it was rare to see women talking about pregnancy workouts and even fewer on how to do it safely. I think that set me apart from other fitness creators—I started making what I needed.”

It was her baby bump that finally caught the attention of Alphalete.

“They asked if I could send them the photo so they could repost it,” she says. “They shared the photo and a little video of me, and that got so many people on my account. After I had my baby, they reached out and offered to collaborate with me.”

That meant Alphalete clothes, Moon’s own discount code, and 10,000 new followers clamoring for her gym advice.

With a following ten times bigger than what she’d started with, Moon decided it was time to diversify her content.

“I took things in my own direction,” she says. “I realized I could influence more than what people wore to the gym. I could give them specific workouts, do Q&As, and just be more involved. I became a more well-rounded account.”

That approach led to her first viral video, a “before and after” of her gym progress on TikTok. She designed an upper body workout guide to go along with it and threw it up on her site.

“Those things combined made things go crazy,” she says. “I got hundreds of thousands of followers on TikTok.”

Those TikTok numbers migrated to Instagram with little effort on Moon’s part.

“People had questions for me,” she says. “And TikTok has a character limit on comments. You can only make so many reply videos before it just gets unmanageable.”

The influx of followers was great for Moon. Despite backlash from other influencers, she says Instagram is her preferred social media.

“Instagram is a place where you can really build community,” she says. “I can message people, comment back and forth, and reshare posts. I can engage with my audience here, and that’s just not as easy on TikTok.”

For Moon, choosing to invest in that community has paid off—literally.

“I’ve worked really hard to make my content and my guides useful so that these women know they can trust me with the next nine months of their life.”

Moon has three sources of income: Reels Play Bonus, her Alphalete code, and workout guides. Despite her Instagram allegiance, Moon concedes that Reels Play is the least profitable.

After her first month in the program, it paid out $1,700. She thought there might be some real potential in participating. The following month, even though she had more views, she dropped to around $200.

But with Alphalete, Moon gets a 10 percent commission every time someone uses her code. Each month, she can earn anywhere from $1,200 to $2,500, depending on new releases or sales.

Even though they can bring in thousands of dollars each month, Moon says both streams are supplemental.

“They’re just less consistent than the guides, so we’ve learned not to rely on a certain amount from them every month,” she says.

Moon’s workout guides aren’t just consistent—they’re incredibly popular. The demand for different guides went through the roof, and she delivered. Now, she has five different guides on her site. Usually priced around $10 each, sales bring in thousands per month.

“It’s more than livable,” she says. “We could be comfortable on the guide income alone.”

In June, Moon’s Instagram income was put to the test when her husband launched a few new business ventures.

“He wasn’t able to pay himself a salary with all the business expenses,” she says. “I became our only source of income, but it was never a problem. I’ve been able to support our family by myself.”

She says that’s thanks to her audience, many of whom she really considers friends.

“I don’t love to talk about the success and the money that’s come from all of this,” she says. “But the one thing I’ll brag about forever is my audience.”

Moon says female fitness influencers usually have a predominantly male audience who flood their comments, something she desperately wanted to avoid.

“I have a lot more to offer than a picture of my butt,” she says. “And I want followers who expect more from me.”

Her stats, she says, prove she’s hit the mark.

A big swathe of those women is either expecting or recently gave birth, Moon says.

“It’s funny to think of now, but you told me my pregnancy was the catalyst behind everything I have—not just my family, but my physique, my health, my platform, and my career—I wouldn’t have been so scared,” she says. “Honestly, I probably would have gotten pregnant sooner.”

Moon says she plans to have more kids, despite her earlier fears and wants to help more women stay active through their pregnancies.

“Ultimately, I want to be known as the go-to person for pregnancy workouts,” she says.

If you looked at her DMs, you’d think she already was.

“Followers will message me and tell me that they’re pregnant,” she says. “[They’ll say,] ‘I just got my positive pregnancy test. Only you know, and I’m hoping to get some advice.’”

That’s “followers,” with an “s.” Moon says it happens all the time.

“It’s an honor, honestly,” she says. “I’ve worked really hard to make my content and my guides useful so that these women know they can trust me with the next nine months of their life.”

Even though her social media stardom is way past what she originally intended, Moon wouldn’t change where she ended up.

“I know it was cringey to act like an influencer in front of my 900 followers, but I’m glad I did it,” she says. “I chose the things I wanted and just pretended I had them—and three years later, I do.”

That’s the advice she wants aspiring influencers to leave with.

“If you want to be an influencer, just live like you are one,” she says. “